Captain Lorca and the Star Trek: Discovery crew harnessed a powerful new form of transportation this week… but, like a lot of things on this show, it came at a steep price. 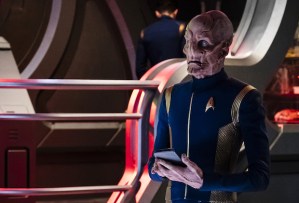 Burnham’s now a full member of the Discovery crew, with a uniform and everything. (She also has a package from the late Captain Georgiou that she refuses to open.) Saru and his threat ganglia still think Burnham should be headed to prison, but Lorca gives her an assignment: He shows her the bloodthirsty slug-like creature he has trapped in a containment pen, and orders her to find out how it was able to kill a dozen Klingons without suffering so much as a scratch. Landry calls it a “ripper,” but Burnham’s not so sure it’s a natural predator. There was no hull breach on the Glenn… so how did it get onboard?

Meanwhile, the Discovery receives a distress call from Corvan 2, a mining planet that’s under attack by Klingons. Corvan 2 is a chief dilithium producer for Starfleet, and no other ships are close enough to help, so Lorca volunteers to fire up that experimental spore drive of his and zip right over. One problem, though: They have no idea where they’ll end up once they spore-jump, Stamets warns. They recovered some device from the Glenn, but they don’t know how it works. And when they try to spore-jump to Corvan 2, they end up in the gravitational pull of a very hot star, nearly burning up before they can pull away. 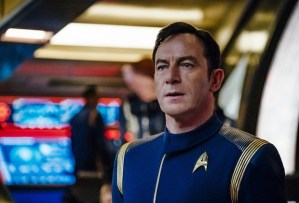 Burnham notices that the slug creature cried out when the spore drive was activated, but Landry’s run out of patience: She sedates the creature, planning to chop off its claw and find out how it got so strong. But the sedation spray doesn’t work, and the creature ends up tossing her around the room, killing her before Burnham can get it back in its pen. Was it just an act of self-defense, though? Burnham notices that Saru’s threat ganglia don’t react when the creature is nearby, and takes a chance by presenting the creature with a pod full of spores. Rather than attacking, the creature lets out a purr — and just about cuddles with her.

Calling the creature a “Tardigrade,” Burnham presents her findings to Stamets, and together, they release the Tardigrade into the ship’s spore forest, where it seems to communicate with the spores in a form of symbiosis. When they transport the Tardigrade into the room with the Glenn device, it hooks into the creature, bringing up a navigation system with every star system known to Starfleet. Here’s the navigation system they’ve been looking for! They’re able to zap over to Corvan 2 and destroy the Klingons, saving the poor miners.

Burnham notices that the spore jump took a serious toll on the Tardigrade, though; the poor thing was suffering. She brings it some more spores as an apology… but will the Tardigrade end up sacrificing its life for Starfleet’s ambitions? Oh, and Burnham finally opened that package from Georgiou: As part of her will, she left Burnham a hologram message encouraging her to “keep your eyes and heart open, always.” And she left her that old-school telescope — so she’ll always keep exploring.

* The Klingons continued their internal warfare, with Voq the white Klingon and his female ally L’Rell getting usurped by Kol after fetching a dilithium processor from the hollowed-out Shenzou. L’Rell stole a ship, though, and will leave Voq with the matriarchs of the Mokai to plot his vengeance. This week’s biggest Klingon revelation, though: They ate Georgiou’s dead body (!!). Yeah, sorry, that kind of thing is not helping me identify with these Klingon characters.