The old saying goes, write what you know — and that’s exactly what Sean and Beverly did in the series finale of Episodes.

In the end, the show within the show became the show. After Matt went behind his friends’ backs and accepted an offer for another series, the Lincolns returned home and wrote the script for Episodes! But, since Matt eventually apologized and convinced Sean and Beverly that he was perfect for their lead role of “Matt LeBlanc,” the final scene featured everyone — including reunited couple Carol and Helen — gathered to watch the pilot.

Below, creators Jeffrey Klarik and David Crane, who are married in real life and loosely based Sean and Beverly on themselves, discuss how they decided on that very meta conclusion. They also reveal whether the real Matt LeBlanc’s latest primetime gig informed the final episode. 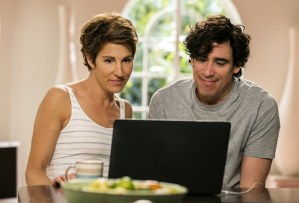 TVLINE | Did you always know the show would end with Sean and Beverly creating Episodes, or did that idea come later on?
DAVID CRANE | It started percolating as we were breaking the [final] season. We had several conversations about where we were going to end up, and once we figured that out, we were able to write towards it.

TVLINE | Matt rejected the first pilot Sean and Beverly wrote for him, then attached himself to another show without letting them know. How much of that, if at all, was inspired by the real Matt LeBlanc signing on to do CBS’ Man With a Plan before you’d wrapped production on Episodes (in June 2016)?
JEFFREY KLARIK | You’re not going to believe this, because so much of this was based on our lives, but this was all written before we found out about Man With a Plan, and then we just thought, “Oh my God, nobody’s going to believe this.” [Laughs] This is exactly our life! Again! It keeps happening. 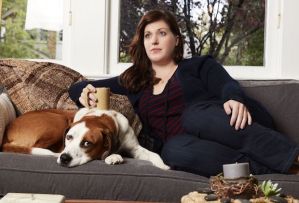 You know The Box, the game show that “Matt LeBlanc” hosts? Well, we were actually flown to London about four weeks ago to meet with a production company that wants to turn it into a real TV show. And back in Season 2, Pucks! was up against that talking-dog show, and ABC wound up having a talking-dog show [with the recently cancelled Downward Dog, pictured right]. It just gets more and more bizarre. We didn’t even know the word “meta” before we did this show, but these things just keep happening!

TVLINE | Sean and Beverly get their happy ending in the form of Episodes, but after years of seeing them tortured by the inner workings of Hollywood, I almost wonder if they would have been better off returning to London. Did you ever consider having them pack up and leave L.A. behind?
KLARIK | No. [Laughs] The one thing I’ve learned about this business over the years is that it’s all about compromise. We did a show before this one called The Class [on CBS] that we were passionate about and loved. We adored the cast, [sitcom vet] James Burrows was directing… It was this magical combination of things. What happened to us is pretty much what happened to Sean and Beverly [with Pucks!]. People started getting involved, and everyone started panicking; they were shuffling our time slot [and] taking money away from the budget. And so all of these things that happened to them happened to us, and [David and I] kept going. 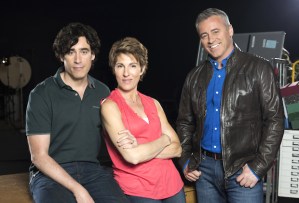 CRANE | The thing that makes the ending more satisfying — for us, at least — is that they’re finally doing a show they believe in. Who knows what’ll happen, but at least they’re doing a show they love. It’s also kind of ironic, because they loved Lyman’s Boys before the network destroyed it, [and] they loved The Opposite of Us and had a true passion for that. But no matter how good the work is at the beginning, the challenge is to hang on to what you believe in and not let those idiots — and I say that with love… You cannot let them note you to death… We hope that Sean and Beverly have gotten to a place where they’re really going to fight harder this time and not let the same stuff happen again.

TVLINE | You could have given me a million guesses, and I wouldn’t have guessed Carol’s happy ending would involve having Merc’s baby and raising it with Helen. Did you always intend on having Carol and Helen get back together?
KLARIK | We kind of did it thinking, “Maybe now we’ll win a GLAAD Award.” [Laughs] You know, I think what happened to Carol happens to a lot of people: They get involved with somebody more powerful than them at their job. Also interesting was that glimmer of hope with Merc earlier on this season where you thought, “This could actually be a nice relationship. He seems like a mensch, finally. I can understand why she keeps going back to him.” But then he ultimately betrays her, as he will do.
We wanted her to have a happy ending [with Helen]. As Beverly says to Helen, “You were the one boss who made her happy.” And in a world where Carol is always going to involved with someone who’s her boss, at least these two women really did love each other. They just, ya know, were neurotic and screwed it up [the first time]. 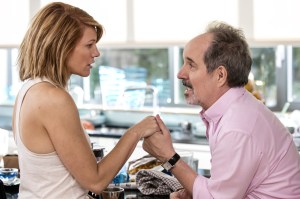 TVLINE | Carol never tells Merc about the pregnancy. Why is that?
KLARIK | We did talk about [that]. We even talked about having her explain why she wasn’t telling Merc, but ultimately, it felt as though the story had moved on.
CRANE | When they’re all in the theater watching the pilot for Episodes, it’s clear [that Carol is pregnant], and he must know what’s going on. I’m sure he’ll be involved to some degree. Both Carol and Helen are going to be great moms, I think. Merc has his other children from all of his other marriages, so I think he’s relieved in some way. [Laughs]

TVLINE | Plus, he’s still engaged to Morning, so there’s a wedding to plan.
CRANE | I get the feeling he’s going to be paying Morning a lot of alimony pretty soon!

TVLINE | You came to the decision to end the show with Season 5. But after getting to that finale, does a part of you wish you had a sixth season to see if the show within the show was a success for Matt, Sean and Beverly?
KLARIK | No. I think we really got off on the fact that we were in control. We decided that this would be when we [got] out. Let people miss us and wish the show was coming back. I’d rather leave it like that than overstay our welcome.

TVLINE | Rarely a day goes by (or so it seems) without the announcement of revival or reboot. If the opportunity presented itself, would you ever want to revisit Episodes?
CRANE | I feel like we ended in a really good place. If we do decide to come back someday, it would almost write itself. You know where to pick up, and that’s a really good feeling. I understand Will & Grace threw out the original ending, and Roseanne is resurrecting Dan. All of these other shows are kind of undoing the mistakes they made.
KLARIK | We’re happy with the bow we put on it, but we love these actors and these characters so much that, yeah, maybe somewhere down the road, it’s not entirely out of the question.

What did you think of the Episodes series finale? Grade it via the following poll, then hit the comments to flesh out your thoughts.