TNT’s The Last Ship wrapped Season 4 on Sunday night with a one-hour crash course in naval strategy, followed by an hour that was a bit more “hands-on.” In the end, which sides suffered which casualties? 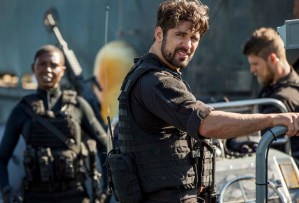 At first facing off against three ships that they knew of — and in the dark about which had The Seeds/could not be sunk — Chandler, Slattery and Meylan got to strategizing, slowly but surely winnowing Team Vellek’s ranks by using the helo to trick one ship into revealing itself as being seedless; sending out Wolf, Green and Azima on a RHIB to trick another ship into mistaking a trawler for the James, and then dropping bombs in its path; shooting a torpedo low enough that it would miss any fishing vessels and instead sink a hostile; and then launching a volley of missiles at Lucia’s ship, including one that went straight down the middle and blasted its bridge, fatally wounding Giorgio.

Alas, the James also suffered losses, when both Sunshine and Razor got shot up mid-sortie. Katie Nolan, freshly (and finally) bestowed with a call sign (“Cupid”), was urged by a dying Sunshine to bail into the water below before the bird crashed. 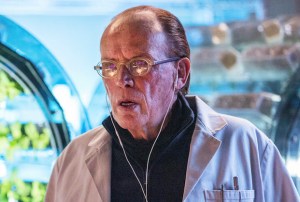 During all of this, the James came to realize that Vellek and the seeds were on a fourth ship, and despite the destruction of its three protectors and its destination known, it stayed on course — especially when an anxious Vellek, suffering nostos withdrawal, ordered the captain to reveal their location by gunning the engines. On land in Malta, Wolf and Azima scouted out some of the “cure” plants ready for transport and found them crawling with bugs, at which point Sasha realized that Vellek’s plan is to spread his nostos-infused cure via insects, and thus quickly. Vulture team’s mission then became one of torching the crop, during which they took a lot of fire, wounding Green and Miller. (Azima meanwhile saved Wolf’s bacon at one point, in the wake of the two badasses sharing their first kiss.) The James itself pitched in at one point, dangerously blowing its whiskey in order to target and shoot down the final cargo plane.

With Vulture team busy and or banged up, Chandler volunteered to sneak up on and board Vellek’s ship, with Sasha joining him on the sabotage/seed-seeking mission. There, Chandler overheated the radar/targeting system while Sasha gummed up the engine. When they then confronted Vellek in his lab, the mad man babbled some before setting the place on fire, his research included. Chandler gave chase after Vellek fled, while Sasha scrambled to snuff the flames and find the seeds (taking a bullet from Lucia along the way). With Vellek’s ship now a sitting duck, Slattery rammed the James alongside it, after which he and a ragtag team (surprise marksman Gator included!) boarded, while Kara dusted off her own gunnery skills to take out the baddies manning the ship’s rails.

In the end, it came down to Chandler confronting Vellek on the ship’s deck — but Lucia blindsided the captain with a bullet. But before she could put one in his bean “for Giorgio,” Sasha sneaked up on and perforated Lucia with several shots. Chandler kept Sasha (still steamed over the Fletcher thing) from targeting Vellek next, since they need his know-how to manufacture a nostos-free cure. Alas, getting the mad scientist to flip was not meant to be. Instead, Vellek monologued about how he had a plan to cure the world of its evil — “I offered you peace, you choose war” — before sauntering off the edge of the deck, into the waters below… where no one thought to jump in and keep him from drowning?

In the epilogue, we saw that Green and Miller weren’t any worse for the wear after being shot, and that enough of Vellek’s research was salvaged to create a cure for the Red Rust. Looking out onto the horizon from the James‘ bow, Chandler spoke to Sasha of what Vellek said, the fact that there will always be threats. Nonetheless, he is committed to embracing this “fresh start,” in various ways — which sounds like a plenty good plan to Sasha.

Watch a Season 5 sneak peek, and vote on the finale below: