As The Last Ship braces for its final Season 4 battle, Sasha Cooper — one of the Vulture team’s finest and fiercest — is reeling from an emotional wallop. And the worst may be yet to come.

Yes, British Royal Navy Commander James Fletcher betrayed those aboard the Nathan James by abetting Vellek’s theft of the African palm seeds that can save humanity from starvation. But Fletcher sought to right that wrong by tipping off the James to Vellek’s next stop, in Malta. That reversal left Sasha to recontextualize her relationship with the Brit, whose noble act likely (and did) cost him his life.

With the TNT drama sailing toward its two-hour finale (airing Sunday at 9/8c), TVLine spoke with Bridget Regan about Sasha’s long-stifled “break” to come, a “first” for her and Tom Chandler, and much more. 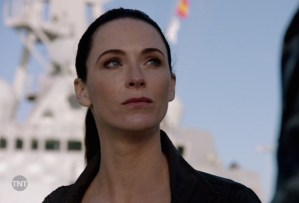 TVLINE | Sasha is feeling some emotions right now….
So emotional. So emotional! I loved it, there was so much to play, so much to do. In a way, Sasha is going through what Chandler (played by Eric Dane) went through in Season 3, where she’s losing hope. And this two-hour finale that we’re coming up on is where we really see her break. For me, playing such a strong, badass character, I was waiting for this moment when I finally got to see whats under that hard exterior.

TVLINE | I was going to say: On a show like this, where they don’t have the luxury of making too much time for these kinds of moments, is there a unique challenge in giving them the weight that they need?
For me going into the show, it took me a minute to adjust to the genre, which is so action-packed and fast and furious. We’re really just moving all the time, trying to defeat the enemy. We don’t get to stop and think about how we feel, we don’t have the luxury. Besides, these aren’t characters that sit around and talk about their emotions; they’re soldiers, they’re tough, strong, focused individuals. In the middle of Season 3 I had this revelation that actually these characters don’t want to stop, whereas me, I’m such an emotional, feeling actress and I love to talk about how I feel. [Laughs] But we’ve touched on a lot this season in terms of PTSD and the nostos and Adam Baldwin’s character wanting to go back…. It got more emotional this year than it has in the past, and I loved it.

TVLINE | Of course you’ve played a variety of badasses, from Legend of the Seeker to Agent Carter and even what you’re doing on Jane the Virgin. What makes Sasha unique?
Well, I find Sasha to be the most different from myself. Not that Dottie on Agent Carter wasn’t different as well [Laughs], but Sasha is so skilled and strong, she doesn’t ever doubt herself, so I have to dig and find that most confident place in myself to play her. It’s not like she doesn’t feel fear — she feels it — but in spite of it she pushes past it. It’s like she doesn’t even give herself the moment, which to me is the ultimate soldier.

TVLINE | Was there any discussion about whether Bridget pumps out a tear when Sasha is standing on the deck talking to Tom about Fletcher?
I actually had a scene in Season 3 where a character on board our ship was giving birth and we thought we were losing the baby. It was a really big scene for Travis Van Winkle (who plays Danny Green) because he has a son, and it was such an emotional day that I was crying throughout the whole day — and it wasn’t right. It wasn’t right for Sasha. We ended up editing around it, and because I was wearing a mask we got to dub over my lines. It was too much emotion for her to show. I learned a lot about her in that episode, because whereas Bridget might cry, Sasha wouldn’t. 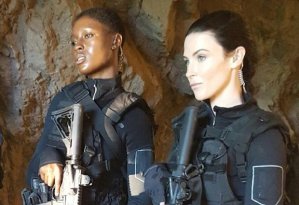 TVLINE | You seem to have made a fast friend in new series regular Jodie Turner-Smith, who plays Azima. Talk about Sasha having another fierce gal in the field with her.
Jodie was such a beautiful addition to the cast this season. She cares so deeply about her character, Azima Kandie, and I think it shows on-screen in her performance. Every moment we’ve shared on-screen we cherish and try to make the most of. I love that our characters organically developed this quiet friendship out of mutual respect and trust. Because they are women in a “man’s world” they immediately understand one another in a deeper, more connected way. And when we pick up in Season 5, Sasha and Azima are really like sisters. It also doesn’t hurt that I adore her and we have a blast dancing, singing and being goofs on set.

TVLINE | Now, everybody is heading to Malta. What kind of finale are we getting on Sunday? Will there be missiles, boots on the ground, some hand-to-hand…?
Oh my God…. It’s The Last Ship, so we’re not going to disappoint. We always go out with a bang. We always try to top ourselves, which I love, in terms of the action and what the crew manages to pull off, stunts…. Everybody is always upping their game. This season in particular, I have loved our villains — Peter Weller, come on! He’s a legend and he’s a trip, such a character in real life. And in these episodes he’s been directing as well and its so cool to watch him give this amazing, massive monologue, standing on the edge of the ship and then go, “Cut!” He really elevates the show whenever he’s on the set as a director or an actor. 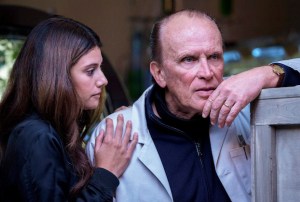 TVLINE | He’s a nice guy, not some cranky Harrison Ford type?
He’s not cranky, he’s passionate. He’s really, really passionate about the show and the material. His only “flaw” is he gets impatient, because we are racing the clock every day. This crew works miracles, what they manage to squeeze into eight or nine days. We’re trying to deliver a summer blockbuster movie every week, so there’s no room for mistakes on anybody’s part. Actors can’t go up on their lines, the crew can’t mess up, the weapons…. There are so many elements, but he manages that well. We have a lot of great directors. 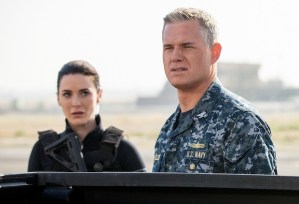 TVLINE | Any “firsts” for you or Sasha in the finale?
I will say that Sasha and Chandler go somewhere that they haven’t gone yet, in terms of this season and their emotional transparency, which I appreciated.

TVLINE | Does the finale — and I stumbled into this pun, sorry — plant a seed for what Season 5 looks like?
We always assume that these characters are going to be ready and waiting, and there’s something comforting about that. They’re looking out for humanity, prepared to take on whatever comes next.

TVLINE | We saw this year that Bridget Regan — she who typically juggles three to four shows at a time — is merely mortal, when you couldn’t fit in a return to Grey’s Anatomy (as Owen’s sister Megan).
I know! I know, it was heartbreaking. But I have to say, producers both on Last Ship and on Grey’s were working overtime to try to make it happen, and it proved unrealistic. It was an unfortunate thing with timing, where there was nothing you could so. I had to take a deep breath and just trust that the universe has got a plan and it wasn’t meant for me this time around. 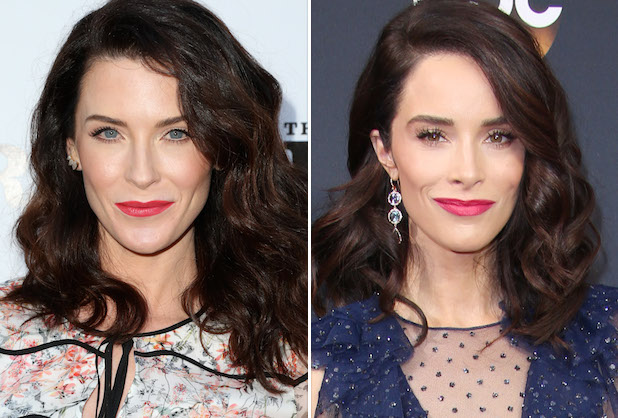 TVLINE | What’s funny is it probably hadn’t dawned on anyone until the recasting that you and Abigail Spencer (Timeless) look as alike as you do.
Maybe it hadn’t dawned on you, but it certainly has dawned on me and Abigail. [Laughs] I have left events where people have been screaming, “Abigail, Abigail!,” holding photos of her for me to sign.

TVLINE | Have you ever run into each other in casting rooms?
No, we haven’t ever. We met once at, like, a Golden Globes event. But in person, I feel like we’re so different. I’m so much taller, and I probably have 30 lbs. on the girl! But our faces! I’m like, “I’m ready to play this woman’s sister. Whenever that call comes, let’s do it.” She is absolutely lovely, and a great actress. I have nothing but praise for her and I’m sure she’s killing it on Grey’s. I haven’t gotten to watch it yet, but I’m looking forward to it.

TVLINE | So what’s next for you? Since Last Ship has already wrapped Season 5, you’re down to “just one show” right now, Jane the Virgin.
I’m actually heading to Vancouver next week to do a Christmas rom-com [TV-movie] that I’m so excited about. I just love those movies, my mom loves them, and that’s my favorite thing to do when you finish a job, do something that’s the opposite.

TVLINE | Let me guess — you play a Christmas wedding planner and you fall in love with the groom?
Dude, you should write these movies. No, I’m a travel writer and I have to write an article about a traditional American Christmas, but I’ve never had one, because I’ve been living all over the world for so long. So I’m having my first American Christmas at home and of course the cabin is double-booked with a handsome man and his cute kid!