As one quickly surmised watching Once Upon a Time‘s Season 7 premiere, which relocated the real-world action to Seattle where Henry, Regina, Hook and Rumple are all strangers to each other (and other key players are MIA), “We’ve got a new curse in a new town, and a new adventure,” series co-creator Eddy Kitsis noted Friday at New York Comic-Con. “Henry is off to find his true love, and what we’re going to see is clearly some people from our past… are along for the ride.”

What crazy curse turned Henry’s world upside-down obviously included a new twist on the tried-and-true mind wipe. “You’d have to be a bad villain” not to change things up, said Kitsis. “If you’re going to rebuild the Death Star, make sure that one hole that can make it explode is covered! So we covered that hole.” (It may just take some time to find out what exactly the curse is, who cast it, and why.)

Coming out of the season opener, here is what else Once co-creators Kitsis and Adam Horowitz and series star Lana Parrilla shared at Comic-Con, either on stage during Friday’s panel Q&A or backstage with me beforehand.

HEEEERE’S RONI! | “Roni’s a girl you want to hang out with and do shots with at the bar!” said Parrilla of the Evil Queen’s latest persona, a bar owner fending off neighborhood gentrification at the hands of real estate tycoon Victoria Belfry (aka Cinderella’s wicked stepmother Lady Tremaine). “She’s a little more rough around the edges, she has cool clothing, she has lots of sass — something Regina and Roni have in common. But she does have this wisdom that you’ll see over the course of the season. It’s like Regina 2.0.”

Suffice to say, Roni balking at Victoria’s bid to buy the bar has earned her an enemy. But Parrilla’s not worried. “Those bitches, they’re going down,” she teased of Victoria and her dutiful daughter Ivy (aka Drizella). “Lady Tremaine is evil, and so is her daughter. They are in cahoots and… that’s about all I can say.” but in squashing Belfry’s buyout, “You saw Regina is inside her,” Horowitz noted, “and that spirit keeps coming out.” As Kitsis put it, in previous seasons “we saw Regina go from Evil Queen to queen. She’s always been a leader, she’s always been take charge, and what we love about Roni is she’s the neighborhood hero. She’s protecting her village.” 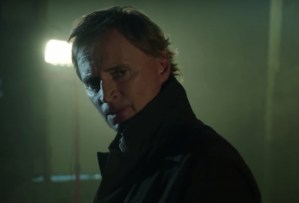 HOOK AND RUMPLE, BUDDY COPS? | Yes, that was Hook’s new persona looking at Rumple’s with a bit of giddy admiration. “To Rogers, Weaver is an esteemed detective to look up to and aspire to,” Horowitz told TVLine. “When you see his look at the end, it’s kind of starry-eyed. Like, ‘I’m partnered with this guy, this is going to be cool!'” This unlikely alliance wasn’t happenstance, however. “As the season goes on, it seems to be that Weaver picked Rogers for a reason,” Kitsis teased, adding: “We’re telling everyone’s favorite Disney fairy tale — Serpico.”

“We’ve just scratched the surface with Weaver,” said Horowitz. Having first been glimpsed in the premiere torturing someone, “You see that he’s kind of straddling worlds in Hyperion Heights, but there are a lot more secrets to be revealed.”

‘HAPPY BEGINNINGS’ ENDED?! | Though Hook and Rumple for example are without Emma and Belle in this cursed existence, fans shouldn’t mourn the happy beginnings they worked six seasons toward. “It’s a show about hope, so to take away happy endings would be hateful,” Kitsis said. “It’d be mean.” Rather, Episodes 2 and 4, for which Jennifer Morrison and Emilie de Ravin respectively returned, will shed light on where things stand with each pairing.

As as result of this “reset” season and the new identities for familiar characters played by returning stars, “There’s incredible energy on the set this year. People are excited and really into trying new things,” said Horowitz. “It’s fun for our legacy actors to be able to play new colors and shades and particularly these cursed personas. And then we’ve got a bunch of new people who joined who are having a ball.” Added Kitsis, “For us, it was fun creatively” to shake things up after six seasons, “and I think it’s the same with the actors. Like, Bobby [Carlyle] is in the best mood. They’re all having fun.”