ABC’s Once Upon a Time christened its new Friday time slot with a rather new chapter in the lives of the Evil Queen, Rumplestiltskin, Captain Hook and Henry Mills. Will you keep turning the pages on Season 7’s reboot sequel/“requel”?

IN SEATTLE…. | Rewinding just a bit from where the finale left off, we see that grown-up Henry is a frustrated writer. (Seems he got credit for the Once Upon a Time tome that Lucy lugs around, but hasn’t succeeded with a follow-up — a fact that he is reminded of when the lass comes knocking at his door claiming to be his daughter.) After sending the tale-spinning rugrat away, Henry later comes home to find his Geronimo Jackson laptop gone, replaced by a note directing him to Roni’s bar.

There, Henry meets the proprietor who is of course Regina — but Henry doesn’t recognize her nor vice versa. After bonding a bit with the bar owner over his odd encounter with a strange girl (“Imagine if I walked in here and said that I was your son?”), Lucy’s mother Jacinda shows up full of apologies — and leaving Henry visibly smitten. 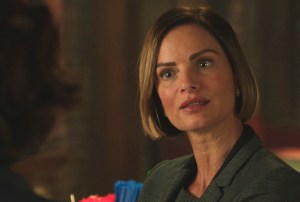 Roni’s story meanwhile is this: it’s “half-price day” at the bar because at midnight it turns into, no, not a pumpkin, but the property of Jacinda’s stepmother Victoria Belfry, a cold-hearted real estate developer who has been gentrifying the charming Hyperion Heights nabe.

After bidding Jacinda and Roni adieu, Henry realizes his car has been stolen, and his investigation into it introduces him to Officer Rogers (aka Captain Hook), a real “Eagle Scout” with the Seattle PD. Meanwhile, Jacinda (who rooms with Sabina aka Princess Tiana) discovers that Lucy has gone missing, so Veronica tasks her stepdaughter’s new friend Henry with offering intel. Henry brings Victoria and the cops to the ferry landing that leads to an island that Jacinda and Lucy dream of calling home one day. Victoria’s dutiful minion of a daughter Ivy turns Lucy’s storybook over to Officer Rogers to dispose of — and, leafing through it, he can’t but be drawn to the illustration of who we know to be Emma. Back at the cop shop, Rogers learns he has made detective and promptly meets his new partner,Weaver (aka Rumplesiltskin).

The Seattle side of the episode closes with Victoria arriving at Roni’s at midnight only to find the owner inspired by the days’ events to not roll over but safeguard her small part of Hyperion Heights — and Victoria is not happy. Henry meanwhile goes to place flowers at the grave of the wife and daughter he believes to have died in a fire… only to discover the cemetery he believes them to be buried at never existed! 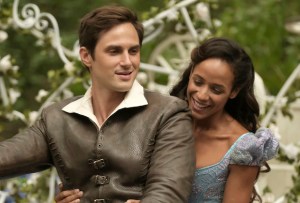 MEANWHILE IN FLASHBACKS…. | We briefly start back in Storybrooke, where high school grad Henry is saying good-bye to  Regina to go find his own story. After he rides his motorcycle into a portal, we pick up years later Enchanted hog crashes into (a new) Cinderella’s carriage. After the plucky princess KOs Henry and steals his bike, he wakes up the prisoner of Alice (from Wonderland but other places too!). She warns Henry on behalf of Rumple that this is not his story, so he should leave Cinderella behind and move on. Henry, though, tracks Cinderella to a ball where she plans to drive a dagger into the prince who destroyed her “simple family.” Ultimately, she doesn’t have the heart go through with it — but stepmother Lady Tremaine (aka Victoria Belfry) finishes the “chore “ for her forever-disappointing stepdaughter. In doing so, she puts favored daughter Drizella in line to wed the prince’s younger brother — while framing Cinderella for the assassination. Henry helps Cinderella flee the guards and urges her to meet him at the portal before it vanishes at midnight. But she is a no-show.

What did you think of Once Upon a Time‘s Season 7 start? Who do you think is behind this new curse? And which new characters popped for you?