Thursday’s Scandal premiere transported viewers to some sort of Earth-2 version of the Washington, D.C. we left at the end of Season 6 — or at least it felt that way.

I mean, come on: POTUS Mellie and VP Cyrus working together for the betterment of our nation? Olivia embracing her new position as Chief of Staff and B613 Command? Quinn juggling impending motherhood while running Quinn Perkins and Associates? I can already tell that Scandal‘s final season is going to feel like one long “what if?” episode — and I’m not mad about it at all.

Let’s begin with the people running our country, shall we? Mellie’s main focus at the moment is passing an education bill in memory of Luna Vargas — reminder: the world thinks Luna died of a naturally occurring heart attack — which she and her team are working to achieve by any means necessary. Olivia, for example, resorted to an envelope stuffed with blackmail to win over one senator’s vote. (You can take the woman out of OPA, but you can’t take OPA out of the woman.) 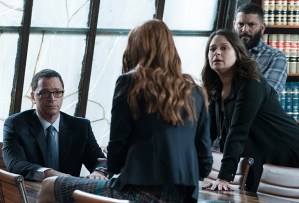 Speaking of Olivia’s old stomping grounds, the firm finally took on one of its first clients since its founder’s departure: the concerned daughter of a “religious studies professor” with whom she lost contact after he went overseas for a symposium. Yadda yadda, it turned out her father was actually one of the CIA’s most valuable undercover assets — and just like that, it became everyone‘s problem.

Jake’s immediate solution was for Olivia to use B613’s assets to kill the guy before he had a chance to crack under torture, a decision Liv wasn’t exactly ready to co-sign. So he went behind her back, getting Mellie on board with Operation: Kill the Good Guy. Olivia’s counter-plan, ironically, was way darker; with Huck’s finger on the trigger, Liv threatened to kill the ambassador’s son if he didn’t return the operative to the United States.

And then there was Cyrus, who spent the first hour of Scandal‘s seventh season doing exactly what he’s been doing for the past six years: lusting for power. But no one was more surprised than me when he ultimately rebuffed a lucrative offer that would have essentially paved the way for a Beene presidency. Seriously, this man — the same guy who ordered his own husband’s assassination back in the day — actually declared (out loud!) that the good of the country is to be valued over the good of his own party. (And I was even more surprised to discover that the senator’s whole offer had been set up by Olivia.)

But all was not well that ended well: Mellie didn’t appreciate that Olivia’s “freelance” move interfered with her and Jake’s plan, leading to a brief shouting match between them. (And you know things are about to get real when Mellie’s voice drops to its lowest octave.) That’s when Olivia pulled the most Olivia move in the history of Olivia moves, reciting three rules about herself that Mellie needs to follow:

1. “You do not ignore me, because…”
2. “I am right. Always. It’s frustrating, get used to it.”
3. [Insert, arguably, the longest speech Scandal has ever served up, this time about how Liv and Mellie need to stick together as women here.]

* During Olivia and Rowan’s dinner scene, I had but one thought in my head: “How has this guy not been murdered yet?” Well, that and Rowan could use a crash course in casual father-daughter conversation. (“There is a reckoning coming for you! You think you have all the power but … the lights are going out. You cannot have it all!”)

* Did anyone else feel some feelings when Olivia looked longingly at the news report about Fitz in Vermont?

* Honestly, I was A-OK with Liv and Jake calling it quits. They used to have chemistry, but I just don’t feel it anymore. Hell, they even described their arrangement as “convenient, safe, secure and easy.” I also have to say that I rather enjoyed Liv’s “you’re sleeping with the boss” speech. (“You got comfortable. Don’t worry, it’ll never happen again. This is over.”)

* Not to mention… doesn’t Jake still have a wife… whose father he murdered?

* Besides, I’m loving the Fifty Shades situation Liv has going with Jay Hernandez.

Your thoughts on Thursday’s Scandal? Grade the premiere below, then drop a comment with your full review.