Considering what she’s gone through in the last three years — or even the last six months, really — Annalise Keating could really use a win.

And in Thursday’s episode of How to Get Away With Murder, she finally got one. Of course, the ABC drama isn’t really big on letting its characters feel happiness for more than one scene, so Annalise’s victory is short-lived. But she’s finally got something to put in the “W” column — a courtroom triumph, to be specific — and that’s a start.

When Annalise sits down for another court-ordered therapy session with Isaac, she dismisses his comments that she looks tired, chalking it up to the newest case she’s taken on — the first one, in fact, since she landed in a legal mess of her own last year.

But this case is particularly personal for Annalise; she’s come back to defend her onetime cellmate, Jasmine (played once again by the sublime L. Scott Caldwell), who is still behind bars for solicitation and illegal possession of a firearm — and, yes, still worships Annalise. The proceedings don’t get off to a great start, as Annalise fails to get a continuance on the case, and she’s forced to prep for Jasmine’s trial… which is starting the next day. (Even worse? The body cam footage from the night of Jasmine’s arrest shows that she solicited an officer and nearly assaulted him, all in a matter of seconds. Had the prosecution filed charges for those incidents, Jasmine’s case would likely be a lost cause.)

I’ll spare you all the fancy jargon behind Annalise’s eventual success, but the outcome of Jasmine’s case is a happy one: After realizing that Jasmine had first been trafficked when she was just a minor, then subsequently failed, time and again, by a racist and corrupt justice system, Annalise begs the judge to vacate all current charges (and previous convictions) against her client. The judge isn’t able to fulfill that specific request, but he is able to seal all of Jasmine’s previous convictions — meaning, she’ll be able to apply for jobs and housing without having to reveal she’s a convicted felon. (The monologue that Jasmine delivers to Annalise, detailing the horrific circumstances in which she was raised, is without a doubt the episode’s most powerful moment.) 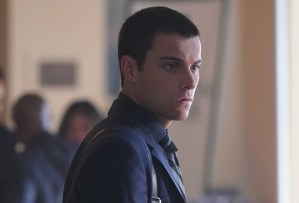 So, dressed in casual clothing and clutching a wad of cash that Annalise gives her to get her life started, Jasmine walks away a free woman — but Annalise still has some baggage to unpack. Throughout the hour, Annalise sits down for more therapy sessions with Isaac, but she’s hesitant to reveal all of the trauma she’s gone through in the last few years (or her entire life, for that matter). She only wants to talk about her case with Jasmine, and Isaac has had about enough of his client’s cagey behavior.

Finally, Isaac tries getting through to Annalise by revealing some of his own struggles: Although he’s clean now, and living a stable life, he was once badly addicted to heroin. And even though he thinks this personal revelation will make Annalise more inclined to talk about herself, it has the opposite effect. “I wish you hadn’t told me that,” she admits.

See, the last time Annalise started therapy, she was in a nearly-identical situation. She only wanted to talk about the case she was handling at the time, and it wasn’t until her therapist revealed information about his own life that she began to share more personal anecdotes. “And then,” Annalise reveals, after she and this therapist began exchanging intimate stories about their lives, “he became my husband.” (Run, Isaac! Run!)

* While handling Jasmine’s case, Annalise has an extremely awkward run-in with Bonnie, who she realizes is now working for the district attorney’s office. Later, when Nate sees Annalise for the first time since… well, since all hell broke loose, he tells Annalise that he knows Bonnie is just a mole, infiltrating the DA’s office on Annalise’s behalf just to get information. But Annalise assures her former beau that Bonnie’s new gig is legit; she really did fire the woman, because “everyone is better off without me.” (Bonnie and Nate can’t argue with her; that night, the two of them bond over being survivors of the tornado that is Annalise Keating’s existence.)

* The final moments of the hour reveal a bit more of that unsettling flash-forward from last week’s premiere: While Laurel panics about the whereabouts of her child, Isaac — who is also at the hospital for some reason — leaves a voicemail for Annalise. “Where the hell are you?” he asks. “She’s awake. Answer the damn phone.”

But something terrible has clearly gone down in close proximity to Annalise. Bonnie, who is still working at the DA’s office three months from now, enters the hotel where Annalise is living and joins a whole slew of cops and detectives who are investigating her room. With tears in her eyes, Bonnie makes her way to the hotel elevator, only to find bloody handprints on the walls, which trail down to a pool of blood on the floor.

* In the present day, life continues to be no picnic for the Keating Four. The Middleton Law Fair is supposed to give each of them a shot at an incredible summer internship, but the interviewers show zero mercy for any of Annalise’s former interns. Connor is so flustered, in fact, that he can’t come up with an answer for “Why do you want to be a lawyer? — yeesh — and fails to receive any callbacks from law firms in the area. Laurel, meanwhile, is too busy plotting revenge against her father to be bothered with second-round interviews.

Asher, to his credit, gets three callbacks, but gets into an altercation with resident Middleton D-bag Simon at one firm’s Very Fancy Mixer, thus losing the internship to his nemesis. As for Michaela, she makes good on her Beast Mode promises and snags the other internship position at The Very Fancy Firm, Caplan & Gold — which is also the same firm that represents Laurel’s father. And boy, does Laurel have some news for Michaela: “My father killed Wes, and you’re going to help me take him down.”

OK, your turn! What did you think of Thursday’s Murder installment? Any theories about whose blood is in that elevator? Hit the comments with all of your thoughts!