Do not adjust the brightness setting on your TV: Riverdale really is a lot darker this season.

The CW teen drama might be based on the gee-whiz Archie comics, but its freshman season was more Twin Peaks than Leave It to Beaver, with intriguing noir elements like the season-long mystery of who killed high school football star Jason Blossom. And Season 2 — debuting next Wednesday at 8/7c — doubles down on the dark stuff, with fresh relationship roadblocks for the show’s core couples, new cast additions stirring up trouble and a less innocent Archie after his dad Fred got shot by a masked gunman in last season’s finale. 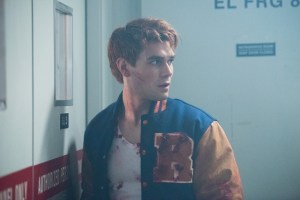 The mystery of who shot Fred is “certainly what drives us right out of the gate” in Season 2, executive producer Roberto Aguirre-Sacasa tells TVLine. Like Season 1’s Jason Blossom murder mystery, Fred’s shooting taps into the “deeper secrets of the town and its history,” he hints. And that’s not all: Here are six more plot developments to look for when Riverdale returns next week, from a new-look Reggie to what the EP calls “potentially the darkest storyline we’ve told.”

SEPARATION ANXIETY | Jughead’s move to Southside High does present problems for his relationship with Betty this season, Aguirre-Sacasa admits. “Even though they’re still in the same town… there are issues of long distance. Even not being in the same school and not seeing someone daily, that makes a difference.” He warns that the teen lovebirds face a “struggle to keep their relationship growing and deepening and intact, even as circumstances seem to be forcing them apart.” (Say it ain’t so, ‘Bughead’!)

‘DARK BETTY’ RETURNS… | If you loved seeing Betty tap into her dark side last season, you’re not alone. “Lili [Reinhart], who plays Betty, loves going ‘Dark Betty,’ and we love it as well,” Aguirre-Sacasa reports. He chalks up the appeal to the fact that Betty is “the most wholesome character” in Archie comics lore: “Her going dark is the ultimate sort of subversion of Riverdale, and the Archie characters.” And yes, he confirms we’ll see more of that soon: “She goes dark in Season 2, that’s for sure.” 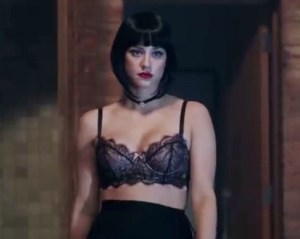 … AND THE WIG, TOO? | But will we see that jet-black wig Betty donned when she went off the rails last season and nearly drowned Chuck in the hot tub? Network suits weren’t exactly thrilled with it, Aguirre-Sacasa reveals: “We got a lot of raised eyebrows from the executives working on the show.” But the Riverdale writers still talk often about bringing the wig back, he says: “My hope is that we can get it in, and make it as impactful as we did in Season 1.”

A BLAST FROM VERONICA’S PAST | The Good Wife‘s Graham Phillips joins the Season 2 cast as Nick St. Clair, who Aguirre-Sacasa describes as “an old school chum of Veronica’s, when she ran with a fast crowd in New York.” As soon as Nick arrives in Riverdale, he “starts causing problems for everyone,” the EP adds. “We go pretty dark with his storyline. In a way, it’s potentially the darkest storyline we’ve told… it does involve Archie and Veronica, but it sort of draws other characters into the churning waters as well.” 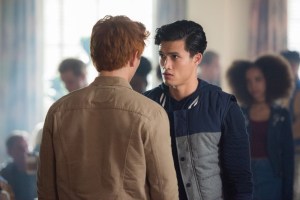 MEET REGGIE (AGAIN) | Season 2 will introduce us to Reggie Mantle all over again, with new cast member Charles Melton taking over for Ross Butler. Unlike last season, when Reggie was rarely a part of the action, he’s been in every episode filmed so far, Aguirre-Sacasa says: “Reggie’s such a big part of the mythology… we really were missing that kind of day-to-day frenemy antagonist with Archie.” He hints that Melton is “playing Reggie very differently than [Butler], but I love it… I think people will be really surprised and pleased by him.”

ARCHIE & BETTY, TAKE TWO? | Yes, Archie’s with Veronica, and Betty’s with Jughead… but we couldn’t help noticing that longing look Archie gave his next-door neighbor in last season’s finale. And the feeling might still be mutual, Aguirre-Sacasa notes: “For a long time, Archie was what Betty wanted. And I don’t think it’s like a switch being flipped, that that just changes.” Archie’s newfound maturity could be a factor, too, he thinks: “Now that he’s a little bit older, a little bit wiser, is he like, ‘Wow, I let this really good thing get away’? And is it too late?” Though he thinks Archie and Veronica “are pretty great together,” the EP warns that, ultimately, “the heart wants what it wants.”

Riverdale fans, hit the comments and tell us what you want to see in Season 2.