Jennifer Hudson — enthusiastic or disrespectful? Viewers of The Voice — and readers of TVLine’s recaps — have been arguing over the answer to that question since the beginning of Season 13’s Blind Auditions. Some of you say that she’s a showboating spotlight-stealer who thinks nothing of chattering through what are make-or-break performances for the contestants. Others suggest that she’s just really into it, and c’mon, at the end of the day, what singer wouldn’t be thrilled to have their potential coach be so moved as to throw a shoe at them?

Me, I’m with the latter camp. JHud doesn’t get really talky, I’ve found, until at least one chair has turned, meaning that the contestant is already off the hot seat. I’d love it if somebody threw a shoe at me to compliment my “vocalizing” rather than encourage me to shut up. And, once all the footwear is collected, Jennifer comes off as a better coach than any of her fellow panelists, skillfully schooling singers before they’ve even decided whether they’re joining her team. Not that my two cents in any way, shape or form settles the matter!

Before you hit the comments to continue the debate, let’s review the contestants from Tuesday’s Blind Auditions who’ll be advancing to the Battles… 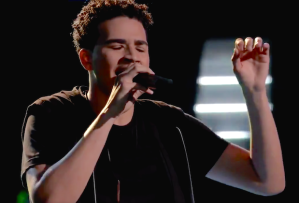 Anthony Alexander (Team Adam), “Redbone” — Grade: A- | The soon-to-be high school senior was eager to show his family, including a former Voice cameraman, that their faith in him was well-placed. Not. A. Problem. On his Childish Gambino cover, he revealed not only a fairly mind-blowing falsetto but also a smooth-as-silk lower register and hinted at some rock ability to boot. And just imagine the baby-making album he could record with that voice. Da-amn!

Sophia Bollman (Team Miley), “Invincible” — Grade: B+ | After getting a “Knock ’em dead” call from Gene Simmons, this 18-year-old California girl proved she didn’t just have the chutzpah to take on a Kelly Clarkson song, she had the chops for it, too. There were a couple of glitchy notes — Miley kindly called them “moments that weren’t as strong” — but the overall power of her performance made them easy to forgive/forget.

Karli Webster (Team Miley), “You’re So Vain” — Grade: B | This USC junior, brought up on 1970s singer-songwriters, had Miley and Adam’s chairs turning from the start — with good reason: Her voice is unique, mostly pop but with a little country in there, too. (She could for sure do a mean Dolly Parton cover.) Though the coaches were wowed by her low notes, she sounded to me like she faltered on them a little bit. Still, a very good first impression.

Stephan Marcellus (Team Jennifer), “Take Me to Church” — Grade: C+ | This self-proclaimed “alternative soul artist” stumbled out of the gate, blanking on the lyrics. But JHud quickly sensed potential — not just in his pipes but in him, since he recovered and went on to handle the chorus to Hozier’s hit well. Still, I’m not sure he has the range to go the distance. Can you say “Battle Rounds cannon fodder”? 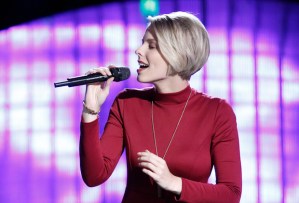 Emily Luther (Team Adam), “Summertime” — Grade: A- | The 24-year-old “music nerd,” driven away from L.A. by the toxicity of the record biz, sings with a voice that’s completely out of time. If you’d told me she was recorded back in the era when Ella Fitzgerald originally sang this classic, I’d have believed you. And, unlike Karli, she had no trouble dipping for those low notes. Really dazzling.

So, who did you think gave the night’s best performance? Vote in the poll below, then hit the comments.