It’s the beginning of the end for The Middle, which kicked off its ninth and final season with an especially reflective premiere.

In “Vive La Hecks,” Frankie stresses herself out trying to come up with an item the family can put in a time capsule being buried under the Orson Cow to be dug up in 100 years. She’s worried that the Hecks will be forgotten after they’re gone, a sentiment that also seems to speak to the legacy of The Middle. (Despite being one of TV’s longest-running currently-airing sitcoms, it never quite entered the zeitgeist a la Modern Family, which premiered as part of the same sitcom bloc nearly a decade ago.)

“We’re not going to be here forever, and when we’re gone, will people remember us?” Frankie asks. “Will people remember that the Hecks were here? What if they don’t and we’re erased from history?” Mike, who can’t even be bothered to pretend to care, scoffs, “I’m pretty sure history will be fine with that.”

But as Frankie comes to realize, having a legacy is not all that it’s cracked up to be. After experiencing what she thinks is a heart attack but is actually just her body responding to overconsumption of cheese, she gives up on trying to find the perfect memento to put in the capsule and instead enjoys the final day of summer out on the porch with her family.

Elsewhere in the season opener…

A CHANGED MAN | Axl returns from Europe with a laissez-faire attitude — and more. Now sporting a man-bun and using a French press to make coffee, he pronounces every European city he visited in the most pretentious way possible. He’s also learned a bit of a Italian, or so he thinks, and mutters phrases like “Fuggedaboutit!” whenever he gets a chance.

Naturally, Mike is none too pleased, since Axl doesn’t seem at all interested in getting a job. Frankie, certain their son will begin to send out resumés in a matter of days, suggests Mike give him the benefit of the doubt.

THE BREAK-UP | Ahead of his “big sophomore year,” Brick wants to break up with Cindy but doesn’t know how to go about doing it. He eventually butt-dials her by accident as he’s detailing to Frankie all of the reasons he wants to dump her. Cindy doesn’t actually hear any of the conversation but still wanders over to the Heck residence, where Brick rips off the Band-Aid and tells her it’s over. “Is this because your mom is so controlling and your dad has no emotional depth?” Cindy asks, to which Brick, hoping to get off scot-free, simply replies, “Yes.” 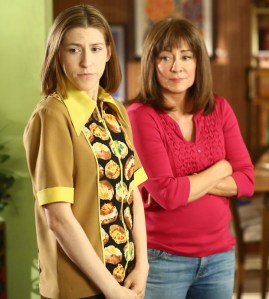 THE SUMMER OF SUE | Sue, who spent all of her time off working at Spudsy’s, tries to fit in an entire summer vacation’s worth of activities before heading back to school. She’s even got a list, which includes — but is not limited to — learning how to whistle, flying a kite, making her own bath salts and binge-watching a TV show. She decides on 13 Reasons Why but only manages to get up to the fourth reason.

The episode also addresses Sean and Sue’s lingering feelings for each other. When he stops by to tell her that he’s been accepted to a med school that’s practically on her college campus, she goes in to give him a congratulatory hug… just as Frankie notes that they’ve always had a special bond — “like brother and sister.” (Eek!) Sue also comes across the snow globe she “rescued” from the trash, unaware that Sean bought it for her last season with the intention of telling her how he feels. It accidentally winds up in the box that he picks up to collect for the time capsule, ensuring that this will-they/won’t-they dance will last the entirety of this final season… and possibly the next 100 years!

What did you think of The Middle‘s Season 9 premiere? Grade the episode via the following poll, then hit the comments to flesh out your thoughts.