Major Crimes creator James Duff is busy directing the 13th episode of Season 6 aka what will now be the series finale, but he did find time to fire off a few thoughts on the announcement that this will be the TNT drama’s farewell season.

“I do want you to know that it was not at all my idea, nor did I want to leave the show,” Duff shared on Facebook Tuesday afternoon, hours after TVLine first reported the news. “The actors, the writers, the producers and our talented crew would have held on as long as we were relevant.

“We’ll have a chance to talk about what happened in the near future,” he added, a bit cryptically. “Meanwhile, we are determined to give you the best season we can. So sorry I couldn’t stop this moment from happening.”

TNT’s announcement came weeks before Major Crimes opens its sixth season (on Tuesday, Oct. 31), and months after Claws and Animal Kingdom respectively got picked up for their second and third seasons. Of TNT’s current slate, The Last Ship was long ago renewed for (and already wrapped filming) a fifth and possibly final season, while Good Behavior Season 2 arrives Sunday, Oct. 15 and The Librarians Season 4 has a double-episode premiere on Wednesday, Dec. 20. The summer drama Will, meanwhile, was recently and unceremoniously jettisoned after a woeful Season 1.

Though it is TNT’s most-watched drama, Major Crimes skews older than Claws and The Librarians (and is on par with Animal Kingdom).

“Trying to make sense of TNT’s choices is an activity that James Duff and [executive producer] Mike Robin and all of us have been engaged in for a long time,” series star Mary McDonnell shared via Instagram. As such, “this was not a surprise. The writing was clearly on the wall,” she added. 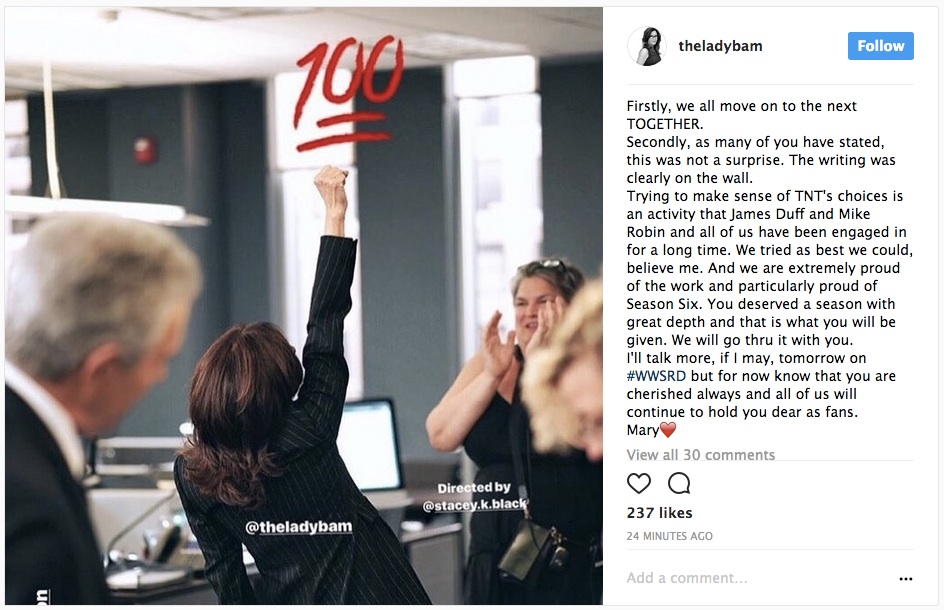 Major Crimes this season will mark its 100th episode (on Dec. 16), which when coupled with its sire, The Closer, totals more than 200 episodes of crime-solving (of the major kind).

“[W]e are extremely proud of the work and particularly proud of Season Six,” McDonnell told fans. “You deserved a season with great depth and that is what you will be given.”