American Horror Story‘s titular Cult is down a member after Tuesday’s episode, though a surprising(ish) addition has emerged to take their place.

The roster-changing episode begins with Bob and Beverly — whose names, in any other context, would sound like the title of an old-school sitcom — arguing over her sensationalized reporting of the serial killings. (To be fair, her latest news package does feel like one of The Soup‘s classic Inside Edition parodies.) Beverly attempts to save her job by reminding Bob that she knows he was boning Serena before she died (RIP, sweet angel!), but he fires her anyway.

Little does Bob realize, this makes him the next target of Kai’s killer clown cult — say that three times fast — as decided at the group’s next meeting. “We need to make the murders scarier,” Kai suggests, to which Beverly adds that the public needs to see the clowns in order to fear them. That’s when Ivy (yes, that Ivy) saunters into the meeting with an innocent “What did I miss?” (This is the part where everyone watching from home gets to say “I called it!” after predicting, perhaps as early as the premiere, that Ivy was up to no good.)

We get a little more insight into Ivy’s motives during her post-meeting drive with Winter; the nanny warns her that s–t’s about to get “real,” to which Ivy replies that she hates what her country has become — and she hates Ally (#neverforget she voted for Jill Stein!!!) for helping it happen. (Um… Does Ally know that Kai, the leader of their cult, voted for Trump? Didn’t he also help it happen?)

Anyway, Bob’s death turns out to be even more twisted and gruesome than you might imagine. For starters, he’s got a “gimp” in the attic, hanging from the ceiling by a series of hooks piercing his skin. (In case you haven’t noticed by now, American Horror Story likes to blend sex and gore.) Kai makes quick work of Bob’s pal, before letting Beverly end Bob’s suffering via an ax to the damn head. Unsurprisingly, Bev is first on the scene to report the grizzly deaths.

But Beverly’s thirst for blood has not yet been quenched. She suggests that they cut weak-link RJ loose, and since there’s only one way out of the cult, that means dragging the poor guy into the basement and having everyone else takes turns shooting nails into his head. He’s still alive after the first round, but rather than letting everyone have another shot, Kai (uncharacteristically) agrees to put RJ out of his misery. 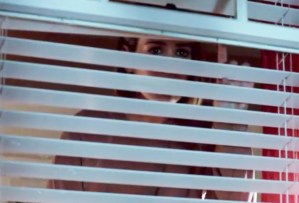 Meanwhile, Ally has gone full Rear Window, using Oz’s telescope to spy on Harrison from across the street. When she sees him lock lips with Detective Jawline, she knows something’s up, and her suspicions are confirmed when she discovers Meadow (alive!) in a hole in the backyard. She’s only free for a few minutes before being dragged back to the house, but she does manage to share this bit of information with Ally beforehand: “It’s a sick cult, and they’re all in it — your babysitter, your wife!”

Speaking of sharing information, the end of the episode reveals a bit more about Kai’s backstory — including that he’s Dr. Vincent’s younger brother! (It’s also officially mentioned that Winter is, in fact, Kai’s sister.) Their mother apparently killed their abusive father, then herself, but rather than tell the cops about the murder-suicide, the brothers simply covered it up. Their parents’ skeletons remain in their bed, and you’d best believe that Kai still speaks to them.

Your thoughts on this week’s Cult? Drop ’em in a comment below.