Just once, wouldn’t you like to hear one of The Voice’s coaches tell a contestant, “No way you’re gonna make it through the Battles, but I hit my button before I realized, so why not join my team, anyway?” It didn’t happen in Tuesday’s Night 3 of Season 13’s Blind Auditions, and — let’s be as honest as the coaches can’t be — probably never will. But that doesn’t mean that you and I can’t appraise the performances with brutal candor. Shall we?

Adam Cunningham (Team Blake), “Midnight Rider” — Grade: A- | A self-proclaimed “dumb kid from Iowa,” this 38-year-old session singer kicked off his Allman Brothers cover with the kinda perfect vocal that usually immediately gets chairs turning (but confoundingly didn’t here, not at first). From there, the country-rocker wowed with a voice as big and impressive as his beard, and turned his charisma up high enough to make him seem like a real contender.

Hannah Mrozak (Team Adam), “Starving” — Grade: B | After revealing that the brother who’d encouraged her to audition for the show committed suicide, this 18-year-old stormed the stage with a strong, soulful voice… that it didn’t seem like she was 100 percent in control of. She’s good, likable and lovely but perhaps not seasoned and/or trained enough to last long.

Shilo Gold (Team Miley), “Stay With Me, Baby” — Grade: B+ | It wasn’t until the very last seconds of her performance that this Denver 26-year-old got Jennifer and Miley’s chairs turning. Then, at last, they succumbed to those vocals — so smoky, you’d imagine she goes through a carton of cigarettes a day even as you hoped, for her health’s sake, she doesn’t. 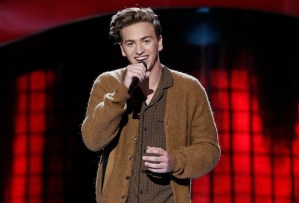 Noah Mac (Team Blake), “Way Down We Go” — Grade: A- | More than just perfect boy-band hair, this 17-year-old, described sweetly by his dad as “made of music,” sang with a depth and maturity that were pretty much the last things you’d expect by looking at him. Between the handsome mug that got Miley to blurt out, “You’re hot,” and the voice that got Jennifer and Blake to say pretty much the same, Noah seems destined to go far in the competition.

Davon Fleming (Team Jennifer), “Me and Mrs. Jones” — Grade: A- | As he took to the stage, the Baltimore native told us that he planned to “sing [his] face off” — and did he ever. “You’re gonna be in the finale,” Blake predicted after hearing him. And for once, it didn’t seem like an exaggeration. Davon’s voice is supremely strong and powerful… although maybe not so strong and powerful that it could compete with JHud’s on their impromptu “I Will Always Love You” duet.

Kathrina Feigh (Team Jennifer), “Big White Room” — Grade: C | Born in the Philippines, this musical-theatre enthusiast packed a lot of oomph into her Jessie J cover. But — and maybe this is less her fault than the tuneless song’s — it wasn’t really the most enjoyable performance ever. Or of the night. “Her voice was just undeniable,” said her future coach… who I’ll wager will be denying her voice come the Battles.

Addison Agen (Team Miley), “Jolene” — Grade: B+ | The daughter of a record-store owner and a music therapist, this 16-year-old brought something new to the table with her dark alt-folk. And she sang with a world-weariness that suggested she’d been around the block a lot more than someone her age has even had time to. But it’s hard to imagine how her unique voice will adapt to the show’s cover-of-the-week format. 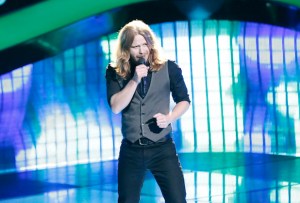 Adam Pearce (Team Adam), “Hot-Blooded” — Grade: B- | Back after failing to get a chair to turn during Season 12’s Blind Auditions, the redhead came out swinging with his scorching Foreigner cover. However, for as fantastically whisky-soaked as his voice is, he often sounded “off” to me. On one hand, that’s very rock-’n’-roll, right? Being so into the song that you’re outta control. But on the other, uh, no. I’m not downloading a song to hear it performed close to perfectly.

Moriah Formica (Team Miley), “Crazy on You” — Grade: A- | After hearing the 16-year-old rock out to Ann and Nancy Wilson’s hit, Adam Levine cracked — blasphemously, I might add — “Heart’s getting old. There’s gonna be an opening soon. You could be in that band.” Uh, no, she couldn’t. But she was pretty great and admirably pulled off the trickiest part of any Heart cover: staying on the right side of screechy.

Aaand getting the dreaded montage treatment were Alexandra Joyce and Eric Lynn, both additions to Team Jennifer, and Anna Catherine DeHart, annexed by Team Blake.

So, of the performances that aired in full, who did you think did the best? Vote in the poll below, then hit the comments.