Lucifer has a problem he just can’t seem to get rid of, we learned in Monday night’s Season 3 premiere.

After coming to in the desert (after being KO’d in the finale), and with wings attached anew, Lucifer attempted to appropriately a thief’s stolen armored car, only to get stopped by the cops. Luckily, his partnership with Detective Decker (and knowledge of her bra size?) got him off scot-free.

Lucifer later arrived at the cop shop not to a fretting Chloe, seeing as he’d apparently only been gone a couple of days. He then labored to explain to the detective how he had been kidnapped, probably by his dad, but Chloe tuned him out — until he unwittingly suggested a return to the scene of the crime. There in the desert, Chloe found no evidence of Lucifer’s abduction but someone else’s. Bringing in the troops and working with the neighboring Lancaster PD, the only clue they came across to possibly ID the buried man’s killer was an “A” keychain.

Thank to prints lifted by Ella, Chloe and Lucifer confronted the keys’ owner, but he contended that he and his dearly departed pal regularly pull elaborate pranks on each other — most recently this faux abduction-gone-wrong. To get at the kidnappers, the plan was for Dan to arrange his own abduction but Lucifer stepped in instead. His clumsy kidnappers explained how they merely do the grab, and their associate Sam does the desert drop off.

Lucifer confronts Sam (aka the non-police officer who found the “A” keychain), and explains that his plan was always to bring Lucifer back after dropping his latest “victim” off in the desert — but frankly, Lucifer’s wings freaked him out! When Lucifer presses the guy for who might have been behind this all, he coughs up the ominous name The Sinnerman. 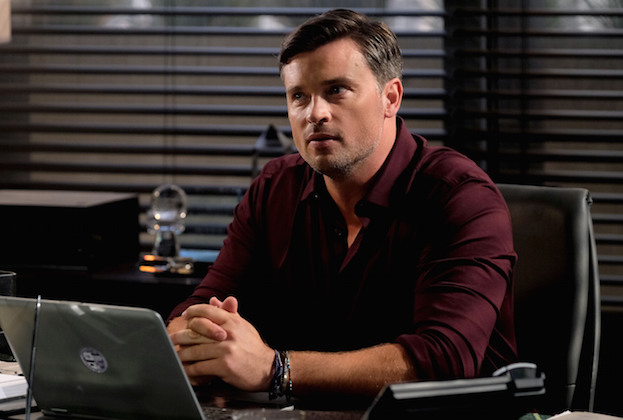 * Lucifer’s first order upon returning from the desert was to make sure that Dr. Linda’s wellness (…if not more) was being tended to, seeing as he felt guilty for getting attacked by Mum.

* In a hysterical moment we didn’t know we needed, Ella formally met Amenadiel — whom she warmly hugged and for whose beefy biceps she instantly developed an affinity.

* Chloe & Co. got introduced to Lieutenant Marcus Pierce, the no-nonsense, motorcycle-riding “rock star” behind such gripping police seminars as “The Red Tape Beyond the Yellow Tape.” (Ella’s a big, big, donut-buying fangirl.) In very short order, Pierce reminds Dan of his checkered record, registers some disgust at Lucifer’s sex life and downplays Chloe’s contributions — though by episode’s end, after the case is cracked, he warms up to Detective Decker some.

* After deciphering the emoji-filled text message he had sent Amenadiel explaining Mum’s fate, Lucifer told his brother of his abduction, possibly by Dad… but stopped short of revealing his restored wings. Amenadiel later uncovered the truth himself, finding Lucifer’s freshly severed feathers at the penthouse. At episode’s end, Amenadiel confronted his brother about the wings (including his “foul” severing of them), at which point Lucifer revealed the “pesky things” to be re-reattached. And not only can’t he shake them, but as he learned when he went to finally show Chloe his true self, the person behind his kidnapping took away his Devil face, to boot! Is Dad trying to demonstrate that Lucifer has been forgiven, and thus anyone can be redeemed? Or is this “Sinnerman” indeed to blame…?

Whatever the case, The Sinnerman is up to something, seeing as Lucifer and Chloe find Sam the Snatched guy impaled beneath a fishing pier.