The Gifted‘s titular mutants include a tracker, a teleporter, a heroine with a magnetic personality and a teenage airbender. But does Fox’s Marvel series itself possess the ability to… hold your attention?

The Gifted opened on Monday night with an intense chase, as prison escapee Clarice (Once Upon a Time‘s Jamie Chung) just barely eluded police capture by tenuously creating and stepping through a portal. Soon after, John aka Thunderbird (The Lying Game‘s Blair Redford), Marcos/Eclipse (Reign‘s Sean Teale) and Lorna/Polaris (Bunheads‘ Emma Dumont) — leaders of the Atlanta way station for the Mutant Underground, which formed just before the X-Men disappeared — track down Clarice and fend off the arriving police cruisers. During the standoff, Marcos takes a bullet, prompting girlfriend Lorna to lash out at a lawman, and in doing do let her guard down long enough to get tased and captured. 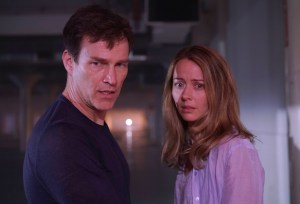 The action then moved to daytime suburbia, where Reed and Caitlin Strucker (True Blood‘s Stephen Moyer and Person of Interest‘s Amy Acker) are taking a meeting with the high school principal regarding their son Andy (Percy Hynes White) being bullied. The principal comes back with meaningless platitudes and acronyms, leading Reed to threaten litigation — which he knows well of, being a prosecutor of mutant criminals.  In fact, Reed later shows up at a mutant detention center to advise Lorna to flip on her pals and suggest that she might want to play nice given… whatever is on the piece of paper he drops her jaw with.

That night, Andy Strucker sneaks off with big sis Lauren (Gotham‘s Natalie Alyn Lind) to a school dance, where the lad eventually gets dragged into the gym showers for a whooping by bullies. Under duress, Andy lets loose with a never-ending scream that shakes the rafters and begins collapsing the locker room and gymnasium outside. Lauren races to rescue Andy, using her own secret mutant ability, to manipulate air, to protect her and others. After they get home, Jace Turner (Burn Notice‘s Coby Bell) of Sentinel (heh) Services shows up to collect the kids, but Caitlin refuses to allow that. When the Sentinel agents start shoving their way in, Andy gets the room shaking as Lauren throws up a barrier, allowing them time to escape to the car in the garage. 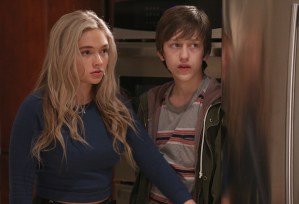 Stopping at a gas station, Caitlin phones Reed to update him on the situation, including the none too small fact that not one but both of their kids have mutant abilities. Reed meets up with the fam, and after one sleep at a motel — where Lauren attempts, but kinda fails, to teach Andy to control his ability — they spy a Sentinel drone circling and flee in a stolen truck. Along the way, Reed reaches out to a colleague to get from one of his files the contact info for the mutant underground network. That puts him in touch with a wary Marcos, who refuses to help until Reed offers up the fact that Lorna is pregnant.

Marcos and Reed meet up at a bar, where the former makes clear his terms: he will get the Struckers across the border to Mexico, where anti-mutant laws are softer, though Reed will stay behind until Lorna is sprung. That night, the Struckers rendezvous with Marcos at a warehouse, but Sentinel Services storms the place soon after. Luckily, John and Clarice show up just then to help everyone dodge the agents, though Sentinel’s spider-like tracker bots (aka Sentinels!) are not to be trifled with. The heroes wind up cornered at a dead end, at which point a nervous Clarice is tasked with popping open a portal, while Andy’s seismic roar proves quite handy at shattering the Sentinels. With human agents descending upon them, Caitlin, Lauren, John, Marcos, Andy and Clarice make the jump… but Reed gets left behind, as the portal closes. As we fade to a maddening black.

What did you think of The Gifted?