CBS’ new sitcom 9JKL has landed a prime piece of TV real estate, airing right after The Big Bang Theory — but are you ready to commit to a season-long lease after Monday’s series premiere? 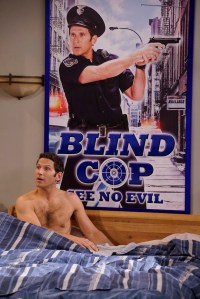 When we meet actor Josh (Mark Feuerstein), he’s in a bit of a slump: He’s newly divorced and his long-running TV show Blind Cop just got cancelled, so he’s reduced to living in the apartment next door to his nosy parents Judy (Linda Lavin) and Harold (Elliott Gould). Even though he insists it’s just temporary, his parents are thrilled to have him right next door — and Judy’s happy he finally split up with “that cold woman who didn’t know a good thing.” Plus, Josh’s surgeon brother Andrew (David Walton) and his wife Eve (Liza Lapira) live right down the hall with their baby son Wyatt, so it’s like a family reunion… every day!

Josh also meets the building’s doorman Nick (Matt Murray) and 12-year-old neighbor Ian (Albert Tsai), who’s not really impressed by Josh’s Blind Cop stardom: “I don’t watch TV. I prefer film.” He gives Josh a tip that Bridesmaids director Paul Feig is working on a follow-up called Groomies, and advises him to get himself an audition to “get that Blind Cop stink off you.” Josh laughs off the advice, but then frantically calls his agent to beg for a meeting with Feig.

His dad Harold has another acting opportunity for him: He wants to make a “viral video” to promote his law firm — not really understanding that you can’t set out to make a “viral video” — and wants Josh to star in it. Josh tries to resist, but after a serious guilt trip from Dad, ends up agreeing to do it. Things start to look up for Josh, though, when he runs into Christina, an old college classmate he used to have a thing for — and who’s newly single, too. She broke up with her boyfriend because his parents were “so overbearing,” though… 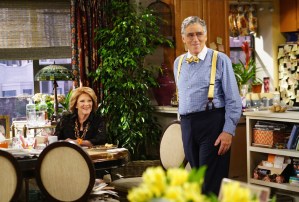 Speaking of overbearing parents: Josh tries multiple times to sneak past his mother’s door undetected, but she always hears him anyway. (“We used to be one body,” she reminds him.) And after Josh’s agent comes up empty with Paul Feig, Harold volunteers that his law-school classmate represented Feig’s cousin at his IRS audit. (Hollywood is all about who you know, right?) Josh tries to set all of this aside and enjoy his date with Christina… but when his brother’s babysitter calls him with an emergency, Josh is stuck bringing his nephew along in a Baby Bjorn. (“He’s for you,” he jokes to Christina. “Flowers are so passé.”)

He and Christina have a nice time anyway… until, that is, she asks him to take her back to his place. He tries to sneak her into his apartment without his mom noticing, but he discovers Nick the doorman has been calling Judy to alert her every time he comes home. (She pays him extra for that.) So Josh tells Christina he needs to check in on his “elderly neighbor” and rushes through a speedy meet-and-greet with Mom before hurrying back to his apartment and locking the door securely. 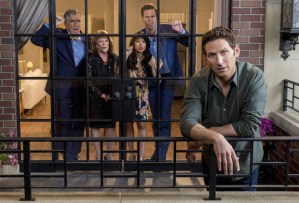 Locks can only do so much, though: Soon enough, Judy is at the door, held back only by the door chain, yelling Josh’s name. Josh tries to take his date out to the terrace, but his dad is on the next balcony, not wearing pants and trying to feed Christine a slice of honeydew melon. And then Andrew’s out there, too, pointing out that it’s been ten months since Josh has had sex. (Harold pipes up with details about his sex life with Judy… and the varicose vein on his testicle.) Finally, Christina hears Judy yelling about “my son,” and Josh confesses that all of these crazy people are, indeed, his blood relatives.

Christina seems surprisingly understanding about all of it — until she hears Harold blabbing about Josh’s ten-month dry spell. That’s the final straw, and after she runs off, Josh screams at his family about “boundaries!” But sometimes family ties pay off: Harold got Josh that meeting with Paul Feig after all, and Josh lands a role as “the klutzy bandleader” as a result. (Turns out Feig is a Blind Cop fan.) In the end, Josh thanks his family for helping him through “the toughest year of his life” — but he also offers Nick the doorman box seats to a Knicks game if he’ll stop alerting Judy when he’s home. Hey, he’s gotta break that dry spell at some point, right?

But what did you think? Give the 9JKL premiere a grade in our poll below, then hit the comments with your post-premiere thoughts.