Rick and Morty‘s third season saw the long-dreaded dissolution of Beth and Jerry’s marriage, the election of Robot Morty to President of the Citadal, and the unsettling birth of Pickle Rick — yet managed to save its most ridiculous shenanigans for last.

Sunday’s season finale reunited Rick and Morty with Mr. President (guest voice Keith David) for the first time since he enlisted their musical talents back in Season 2, although the reason for their meeting was considerably less Schwifty this time around. (Or was it more Schwifty? Did we ever settle on an actual definition for that one?)

Anyway, in addition to POTUS’ little favor being a total waste of Rick and Morty’s time, he wouldn’t even take a damn selfie to commemorate the occasion, prompting the disgruntled duo (“He treats us like Ghostbusters!”) to ditch him in favor of playing virtual-reality Minecraft at home.

From this moment on, Rick and Morty were the Road Runner to Mr. President’s Wile E. Coyote, beating him to the punch at every attempt to protect his country. Hell, they even brokered a permanent ceasefire between Israel and Palestine — thanks to some “perspective-enhancing alien pheromones” and the laid-back vibe of a Star Wars cantina — and let POTUS take all the credit. 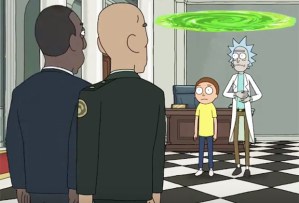 Their plan was apparently to give the president everything he ever wanted in exchange for him completely forgetting that they exist, but negotiations did not go smoothly — mostly because he still refused to take a damn selfie — resulting in the total destruction of the Oval Office, not to mention the senseless deaths of countless Secret Service agents.

Meanwhile, Beth went through one of her classic existential crises after Summer informed her that she’s become a different person since her divorce. Rather than taking the damn compliment — she has gotten kind of rad, for what it’s worth — Beth became convinced that she’s actually a clone of the original Beth, who’s now journeying through the cosmos to find herself. And her panicked phone call to Rick did little calm her fears; in fact, it made her paranoid that Rick was going to terminate her because she suddenly became self-aware.

Beth’s next stop was Jerry’s crappy apartment, where her ex-husband helped her relive a pivotal, sweaty-palmed moment from their courtship. “How lucky I am to be loved by such a simple, honest, simple man,” Beth said, concluding that she must be a clone. “This isn’t the woman you married,” she told him, “because this woman loves you.” Was it everything a guy could hope to hear from his ex-wife? Not exactly. But was it enough for a spineless emotional doormat like Jerry? Duh.

The episode ended with the Smith family — Jerry included! — gathered around the dining room table, with Beth telling her father, “In many ways, things will be like Season 1, but more streamlined. Now, Jerry and I are a happily married couple, and the idea that I was motived by a fear of you leaving can be eschewed.” (Beth’s use of the word “eschewed” was enough to convince Summer that her mom is, in fact, a clone.)

But wait… Is Rick really choosing to stick around in this reality, despite everything going back to the way it used to be? “There are infinite timelines,” he told Morty earlier in the episode. “Why would I stay in one where I trashed the White House, became an enemy of America and became the lowest-status character in my idiot family?” But rather than leave, he simply convinced the president that he swapped places with Fly Fishing Rick™. Could our Rick be maturing… emotionally? I’m pretty sure that would be the series’ biggest twist of all.

And then there was the final post-credits scene of Season 3, which featured the long-awaited return of Mr. Poopy Butthole. “See you in Season 4… in, like, a really long time,” he warned viewers, adding that by the time we see him next, he might be sporting a long, white beard and have a couple of grandchildren. And at this rate, why would any of us doubt him?

Your thoughts on Rick and Morty‘s third season ender? Grade the episode (and season) below, then drop a comment with your full review.