Game show icon Monty Hall, who co-created and hosted the original Let’s Make a Deal, has died of heart failure at the age of 96, the New York Times reports. He passed away on Saturday in his Beverly Hills, Calif. home.

Hall launched Let’s Make a Deal in 1963. It first premiered as part of NBC’s daytime line-up before moving to ABC in 1968, where it continued through 1976. A syndicated version of Deal aired on and off through the 1970s and 80s, before returning to NBC for a brief run from 1990-91. The show was eventually revived with host Wayne Brady in 2009, with Hall putting in occasional guest appearances.

In addition to Let’s Make a Deal, Hall headlined various other game shows, including The Hollywood Squares and Password All-Stars. 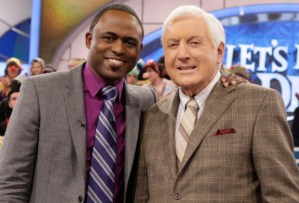 “We are deeply saddened to learn of the passing of Monty Hall, a television legend who hosted a show and created a format that has entertained audiences for more than 50 years,” Angelica McDaniel, CBS Entertainment’s Exec VP of Daytime Programs and Syndicated Program Development, said in a statement. “Monty’s infectious enthusiasm, humor and warmth were a winning combination that was evident to everyone he encountered, whether returning to make appearances on the current version of Let’s Make a Deal, or gracing us with his presence at a photo shoot celebrating CBS Daytime earlier this year. On screen, Monty made the ‘Big Deals,’ but in the game of life, he himself was one. Our hearts go out to his children, his entire family and friends.”

Hall is survived by his three children, including actress Joanna Gleason and TV producers Sharon Hall Kessler and Richard Hall.