In the fourth-to-last episode of Halt and Catch Fire, Gordon Clark (played by original cast member Scoot McNairy) died, after finally succumbing to the degenerative brain disorder he first developed back in Season 2. He passed away shortly before Katie arrived for their date; she then broke the news to Donna over the phone.

Most Shocking TV Deaths of All Time

Gordon’s death came towards the end of an already jam-packed hour, which featured plenty of significant moments for the rest of our characters. To quickly recap: Bosworth and Diane got married; Donna was offered Diane’s vote for managing partner; Cameron met with her collaborator Alexa, who encouraged her to think bigger with her newest project; Joe and Donna buried the hatchet (after she nearly broke his fingers by accident!); and Haley accepted an invitation to return to Comet, shortly before Joe and Gordon agreed that the site would need to be relaunched to compete with Rover. Of course, it’s now anyone’s guess what happens with the web-indexing company in the wake of Gordon’s death.

Below, McNairy weighs in on Gordon’s tragic fate, reveals his character’s exact cause of death and — with three more episodes, including the two-part series finale (on Oct. 14) — teases whether or not this was indeed his final appearance.

TVLINE | Things were going so well for Gordon — almost too well. It’s not like we didn’t know he was sick, but his death still managed to surprise me.
I got a lot of questions about Gordon’s health [at the beginning of Season 4], and my response was, “Gordon is in a really good place this season.” I’m glad that creators [Christopher Cantwell and Christopher C. Rogers aka “the Chrises”] put the health issue on the back burner to get it out of the viewers’ minds, and then hit them with a sudden death for more shock value. 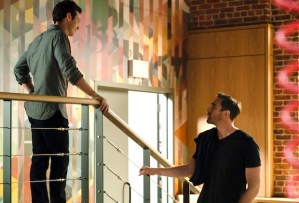 TVLINE | When did you first find out that Gordon was going to die?
We had been talking about his health issues catching up with him, and the idea of his toxic encephalopathy diagnosis coming to a head, since the beginning of Season 3. When we got the announcement for the fourth and final season, I brought it up to them again, like, “Hey, should we have Gordon meet his demise?” They were thinking it. I was thinking it. And about two months before we started production, they came to me and asked, “How do you feel about killing off the character?” I said that I thought it was a great idea in regards to the story. It brings a sense of realism to it. Then it became a discussion of when to kill him off… They wanted to kill him off in [Episode 7] because they didn’t want to end the show on a sad note. So it gave them the opportunity to end the show on a high note, and not make it all about Gordon’s death.

TVLINE | Was the death a secret between you and the creators, or did the rest of the cast know it was coming?
Once I got the news, I told everybody. But they didn’t know whether it was going to be in Episode 6, 7 or 8. I think the crew was probably the last to know. [They found out] once they got the script.

TVLINE | Do we know how Gordon died? Obviously he was sick, but his death technically happened off screen.
I asked, “What is the final blow that takes him?” and they said, “It’s a stroke, but we don’t want to show a stroke. We’re looking for a creative way to do it.”

TVLINE | The viewer essentially gets to watch Gordon’s life flash before his eyes as he wanders through the house and sees visions of Donna with Joanie and Haley. How did that sequence come together?
It was [Director of Photography] Evans Brown, the Chrises and myself all sort of working together to figure out how to make that death feel real, but also obscure and beautiful looking. … I went to Evans and told him, “They’re doing this death sequence, and it’s supposed to simulate a stroke. Maybe you have some ideas for what to do with the camera,” and Evans just did an absolutely beautiful job in creating that stroke sequence. I haven’t seen it put together, but I saw it when we shot it, and I just thought [he] did an incredible job.

TVLINE | Gordon and Donna were in a really good place towards the end. Do you think they might have found their way back to each other romantically had he not died?
I definitely don’t think [they] would have ended up back together. My personal thought is, when you have two kids [from] a marriage, you’re never really divorced. That person is going to be there for the rest of your life.

TVLINE | What was it like developing the relationship between Gordon and Katie opposite Anna Chlumsky, knowing that Gordon would ultimately pass away without getting to see it through?
Anna was an absolute delight to have on set, and I thought what she did with [Katie] was just brilliant. [In] the end, Gordon’s got a great job, his relationship with his daughters is good, and he’s got a love interest who is really great to him. And when everything is falling into place, he loses his life. I chalk that up to the metaphor of “Man builds house, man dies.” Right when he gets everything to where he wants it, his time here is done. 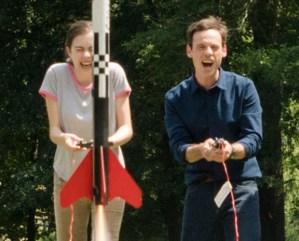 TVLINE | Saddest of all is that Gordon dies just when Haley needs him the most.
It was hard. My daughter’s very young, but working with Susanna [Skaggs], who played Haley, I started thinking, “What’s my daughter going to look like at 16? Are these the same issues I’m going to be dealing with with my daughter?” It was very close to home, and it wouldn’t have been if Susanna hadn’t been perfect in that part. That girl, being a newcomer… she absolutely knocked it out of the park. I really owe so much of this season to her. [Haley] brought Gordon to life, and it wouldn’t have happened if we hadn’t cast her.

Halt and Catch Fire fans, were you blindsided by Gordon’s death? Hit the comments to flesh out your thoughts. (For more HACF Season 4 coverage, click here.)