Inhumans are among us, now that ABC’s new Marvel series has landed on Friday nights. Did you think the double-episode debut was out-of-this-world… or less-than-Marvelous (we ask almost rhetorically)?

My full review of Marvel’s Inhumans, as seen for $20 on IMAX, can be found here, and as such I am not here to regurgitate the broad strokes about who is playing whom, who can do what…. If you’re here, you likely compelled yourself to watch the premiere and want to offer up your two cents.

Yet at this time, I can speak more freely about the second hour — namely, how it marginally improved with the shearing of Medusa’s sentient mane, allowing Serinda Swan to better emote. (Will her powers slowly grow back, a half-inch per month?) And as I said in my review, Black Bolt, as a fish out of water on Earth, evoked Jim Caviezel’s soft-spoken Person of Interest character a bit, casually slipping out of handcuffs and fending off those who aimed to corral him. (That said, there was an ickiness in needing to “root” for him to elude custody. Yes, he knew to not unleash his lethal pipes, but the cruisers he sent flying with that one escaped roar coulda killed any number of passersby.) 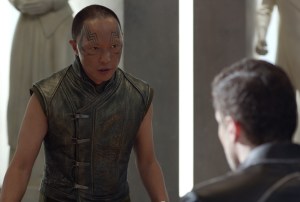 That second hour’s shortcomings included short-circuiting Karnak’s already poorly demonstrated ability (to assess the weakness of any person or plan), thus making him a markedly less interesting character. (If you stop to think about it, most of the mid-premiere developments, Gorgon’s boots and Lockjaw’s sedation included, coincidentally save the show money in special effects.)

Speaking of the plus-sized pug, we never got an explanation for why Lockjaw accidentally transported Black Bolt, Gorgon, Karnak and Medusa to four different locations on Oahu, only one of them near to where Triton was last seen. Black Bolt pretty quickly enough thought to acquire appropriate garb, and yet Medusa didn’t do same? And while it was a cool (if completely telegraphed) twist that Medusa pinched the bus passenger’s knife, to later stab Auran, that was the only remotely clever thing done by any of the stranded Inhumans in the name of survival.

What did you think of Inhumans, which has six more episodes to air before Agents of S.H.I.E.L.D. Season 5 can seize the Fridays-at-9/8c time slot?