The following contains spoilers for the Season 4 premiere of How to Get Away With Murder.

Sorry, Carmen Sandiego. After that How to Get Away With Murder premiere, we’re more concerned with someone else’s whereabouts.

The ABC drama returned for its fourth season on Thursday, and of the many questions we were left with after the episode, one of them is especially worrying: Where is Laurel’s baby?

Laurel, who’s already having a sufficiently miserable year, kicks off the episode by announcing to her father — aka the man responsible for Wes’ death — that she was pregnant, but had an abortion weeks ago. It isn’t until later in the hour that we learn Laurel actually plans to keep the baby, with a due date five months from now, but decided to keep the truth from her meddling dad.

But at the end of the premiere, a flash-forward — now a staple of Murder‘s season openers — shows us some disconcerting events taking place three months in the future, which is still two months before Laurel is expected to give birth: Surrounded by Frank and a team of nurses, Laurel wakes up in a strange, all-white, nearly-empty medical facility, apparently having been drugged at some point that evening. As she comes out of her fog, Laurel places a hand on her stomach, expecting to touch her baby bump… only to find that nothing is there. Frank tries to reassure her that everything will be OK, but he has no news about where her child is, leaving her to scream in a panic, “What happened to my baby?!”

* Annalise travels home to Memphis, only to find that her mother’s dementia is getting worse. (Case in point: Ophelia shakes Annalise awake in the middle of the night, believing that her brother-in-law Clyde is still alive and that the house is going up in flames.) Annalise plans to use her insurance payout from last season’s house fire to get her mom in a pricey, high-quality nursing home… but the payment is frozen when Hannah Keating, Sam Keating’s sister, decides to take Annalise to court over who really owned that house. 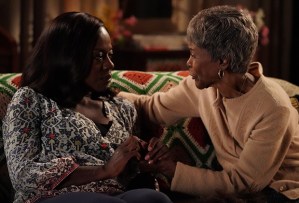 * On the plane to Tennessee, Annalise meets a man named Desmond (played by Viola Davis’ real-life husband, Julius Tennon), who immediately takes a liking to her… even though she doesn’t feel the same way, at least in the beginning. Later that night, once she’s had enough of her family, Annalise pays Desmond a visit at his hotel, and she makes it clear she isn’t there to have a drink with him. Wink. Nudge. But mere seconds into their hookup, Desmond pauses to take a phone call from his daughter, and Annalise suddenly thinks better of sleeping with a stranger in a random hotel room, choosing instead to grab her purse and leave.

* Connor finally gives Oliver an answer to last May’s marriage proposal: Of course Connor wants to get married, but he wants the engagement to happen when he and Oliver are in a good place — not when one of them just narrowly avoided going to prison for life.

* After delivering a Hail-Mary, “Please give me a second chance!” speech to the disciplinary committee, Annalise escapes her disbarment hearing unscathed; provided she goes to therapy (with therapist Jimmy Smits!), she can start practicing law again whenever she wants.

But Annalise’s next move isn’t to get herself back in a classroom or courtroom. Instead, she takes the Keating Four (plus Bonnie) out to a very fancy dinner, depositing on each student’s plate an envelope with his or her name on it. After revealing that the envelopes contain recommendation letters, Annalise breaks the news: She’s consciously uncoupling with her core four. Having been given this second chance to get her life back on track, Annalise doesn’t want any of the students — or Bonnie, who also gets a breakup letter — getting caught up in whatever awful thing Annalise is bound to do next. She wants them to be free of her, finally. (The students’ reactions to this news range anywhere from Connor’s understandable relief to Michaela’s clenched-teeth rage.)

TVLine hopped on the phone with actress Karla Souza to unpack that eventful premiere, including Laurel’s decision to become a mom, a crucial text she sent to her father during the hour and how she really feels about Annalise’s breakup with the Keating Four.

TVLINE | Let’s start with that flash-forward, where we learn that Laurel’s baby is missing. What was your first reaction when you read that script?
Oh my goodness. I was extremely shocked. This time around, [showrunner] Pete [Nowalk] let me know that that was going to be the cliffhanger. He called me into his office, and we normally have a pow-wow with him and the actors at the start of a season. And it was funny because he and the new producing director, Jet Wilkinson, were in there, and they were telling me the play-by-play of what it would be. And I was just, y’know, [gasps]! Gasping the entire time. I was like, “No! No way!” I just kept thinking, “Poor woman. You guys are really putting her through the wringer here.” And also, I couldn’t even imagine what the acting challenge would be like. If you had a baby, and you’ve been waiting for it for however many months, and preparing for it, and then suddenly you wake up and it’s not there? Of course all the questions were, where is it? Is it alive? Who has it?

And Pete had the idea of sharing this with me. I don’t know why. I’m very grateful, because normally he doesn’t. But I did think it gave me a much better sense of where I was heading. It helped me a lot to have an idea of all these scenes coming up with the baby or at the doctor’s or whatever. I always know that the big payoff is going to be: She’s doing all this stuff to avenge Wes, and at the end, it’s going to be gone. It’s going to be a huge turn for her. I don’t know what’s going to happen afterward. 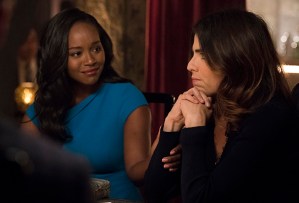 TVLINE | Were you surprised to learn that Laurel is going through with the pregnancy?
I was, but more because of the TV thing. [Laughs] I was told by someone else recently that really knows TV, “They don’t want a baby. They’re not going to want to have a baby.” And then I got back from our hiatus, and Pete was like, “No, we’re having a baby!” And I was like, “All right, we’re having a baby!” [Laughs] I thought it would be really good to see a law student play through a pregnancy while going through law school. And also someone who’s grieving through pregnancy. And someone who also has a vengeance plan. To be a pregnant woman wanting to avenge her partner’s death is pretty interesting to watch. Hormonally, she’s going to be all over the place.

TVLINE | Near the end of this episode, we see Laurel type a text to her dad that says, “Why did you kill Wes?” which she ultimately deletes before sending. Are we to assume that Laurel knows for certain that her dad is behind Wes’ death? Or is she just suspicious of him at this point?
I have the same question as you do. I heard that it’s a very big suspicion, because as soon as she saw Dominic, she remembers something: We don’t know at what point in her life Dominic first appeared, but it was always when her father was involved in whatever she was doing. Laurel seeing Dominic that night last season made her go straight to, “Wait a second. Why is he here? He’s saying he’s here for something else.” At least for me, I was told it was a really big suspicion, and she’s only going to be discovering it with the audience as we go along to confirm it, but she’s almost sure that that’s the case.

TVLINE | Did Laurel’s wariness of her father dictate her choice to tell him she had an abortion?
At least for me, it was more keeping her cards close and keeping him really far. It was also a way to test him to see how much he actually knows about her life. By telling him she was pregnant, she was kind of fishing to see if he knew that, which it looked like he didn’t, which would mean he didn’t know he just killed the father of the baby. But then when I tell him about the abortion, he probably thinks, “Oh, OK, it’s all over.” If I were to tell him I was keeping the baby, he’d be worried that I would find out eventually that he killed the father of the baby. For me, it’s a way for Laurel to make him think, “Don’t worry, it’s all good. I won’t go there.”

TVLINE | We also see that she’s sleeping with a gun next to her bed. Is that stemming from fear of her father, or something else?
It’s from fear of her father, especially because she’s in Wes’ apartment. Rather than thinking her father would actually harm her, she wants to stay there and make sure that no one comes in to plant something. He’s very capable of making everyone think that Wes had some awful past or did something awful, and therefore, that’s why he died. I’m making sure, by staying in Wes’ apartment, that that’s not happening, but I also need to make sure — I mean, my father will probably not do it himself. He’ll probably send someone else. So I always make sure that there’s something there to keep me safe, especially now that I’m pregnant.

TVLINE | When Annalise essentially breaks up with the Keating Four over dinner, Laurel’s reaction is the most neutral of all. She’s almost weirdly calm about it. What’s really going through her mind now that Annalise has parted ways with the group?
Annalise has definitely broken her. She hoped that Annalise would be very happy that she was keeping the baby, because in a way, it would be both of them [keeping it]. It would be a baby that would bring back some joy in Annalise’s and in Laurel’s life, as someone they’re fighting for. When Laurel says she’s keeping it, she looks Annalise in the eye, and there’s a moment that they share, and I think it’s Laurel saying, “We are having it.” And then for Annalise to say, “You’re fired, I’m not going to be with you,” even after Laurel says that, it’s the biggest rejection that Laurel could have faced at that moment. Laurel is too proud to show her emotions, but that sting was one of the biggest ones that you’re going to see throughout the season. That decision has really affected her, and she really expected Annalise to be in the life of this baby. That’ll be something that’s really neatly worked in throughout the episodes. (With reporting by Ryan Schwartz)

With that, I hand it over to you. What did you think of Murder‘s Season 4 premiere? Grade the episode in our poll below, then drop a comment with all of your thoughts!