Chicago Fire fans, we have some very good news: Not only did Casey survive last May’s cliffhanger blaze, but so did everyone else, as revealed during Thursday’s Season 6 premiere.

While Firehouse 51 was left physically unharmed, Dawson came out of the ordeal emotionally scarred by the prospect of losing her husband forever. She tried to play it cool when her dad encouraged her to talk to someone, but later broke down and made Casey promise to never say goodbye to her again.

Meanwhile, Severide escaped unscathed — save for that broken heart from last season — and returned to bedding the Windy City’s female population before catching the eye of Brett’s flirtatious friend Hope (The River‘s Eloise Mumford). As the two exchanged flirty texts, an apartment-less Kidd came knocking on Severide’s door, looking for a place to crash.

Below, showrunner Derek Haas reveals why no one died during the fiery call and how “Dawsey” will move forward after the incident. He also weighs in on Severide’s troubling slide back into playboy behavior.

TVLINE | That was a very sneaky fake-out that you did there with the medal ceremony!
[Laughs] I showed it to my mom, and watching her go through the range of emotions was very funny for me to watch live and in person. The medal ceremonies look curiously like memorial ceremonies, and so we thought, “Oh, we could really, really drive our audience crazy.” Especially in that 15 seconds where, based on what Boden’s saying about the life of Matthew Casey, [if] they think, “Oh, holy s—t, they did it!” then we’ve done our jobs. 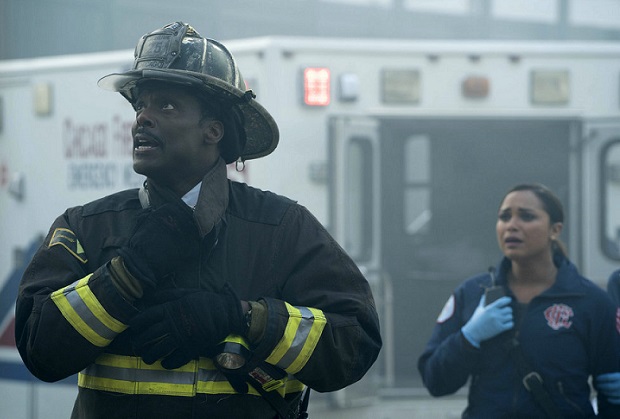 TVLINE | There were no major injuries. No one died. Even Mouch, who had a heart attack during the fire, survived and went back to work, even though he was planning to retire. Did you play around with any other scenarios where things ended differently?
When we conceived it, we knew what our ending was. … We thought about somebody dying. We thought about doing what we did in between Season 2 and Season 3. What we realized when we kicked off Season 3 with Shay’s death [was that] as emotional and raw and surprising and shocking as it was, it also made for a depressing start to the season. Our show is more of an inspirational show and less “everybody’s going around moping and feeling guilty all the time.” And so to start off Season 6, we just didn’t want this to be that kind of a kick-off. Now I’m not saying we’re not going to kill someone this season, because we’ve done it in midseason before. We’ve done it in the second episode before. So we might still do it. We’re not afraid to do it. But kicking off the season with death and all the ramifications of that, and what that would have done to the firehouse, seemed too gloomy of an idea for our show.

TVLINE | The toll of the incident was much more emotional and mental, rather than physical.
Yes, by design. The idea, as we started to crack Episode 1, was, “How would this affect Dawson, having her husband say goodbye to her on the phone?” You can’t just walk away and cover that up with a medal of valor, and say, “Everything is going to be OK.” Dawson has to deal with a lot of stuff on the show. She has from the beginning. The fact that she’s not talking to someone this time, and she’s trying to breathe past it catches up to her in the end. What I thought was interesting, psychologically, [was when] she says, “Don’t ever say goodbye to me again,” is that they both know it’s a lie, and need the lie for her to say, “Tell me that you’ll always come back to me, and I’ll believe you,” and [for] him to say, “I’ll always come back to you.” They both, in the moment, know it’s a lie. But emotionally, the only way you can keep your protection going and not have your heart broken every time somebody walks into a burning building is to say that and mean it, and mean it with your whole heart. But you have to get past the fact that you’re both lying to each other.

TVLINE | How much does Casey giving her that false promise help her move forward? Is that still something that’s weighing on her? Does she have PTSD?
We’re not going to go too far down that road. But you’ll see more effects of that. Dawson has a bad habit of attaching to victims. It will play into some things that are coming up this season. 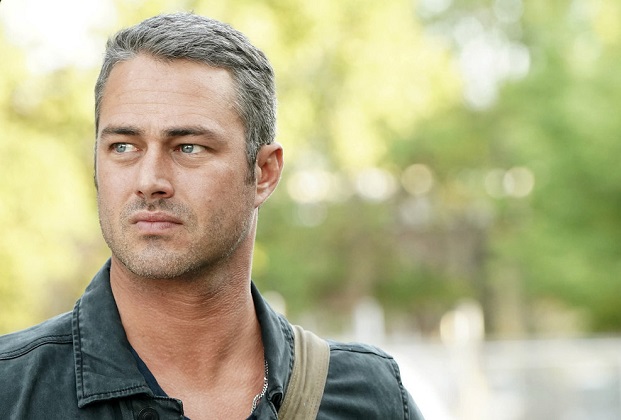 TVLINE | Severide has gone back to his playboy ways. How worrisome is this regression?
It’s worrisome in regards to Brett’s friend Hope, who has arrived on scene and immediately goes against the advice of Brett, who says, “He’s probably not the right person to set your sights on.” That is going to affect Severide, Hope, Kidd, Brett. His playboy ways come back to bite him quite a few times.

TVLINE | When Severide changed his ways last season, he was trying to find purpose in his life. He said he didn’t want to be his father. Is he just trying to protect his heart now after having lost Anna?
Yes. He went down that road, and that worked out even worse! He ended up having his heart crushed and stomped on. So his mentality is, “Why not go back to dulling my senses with a parade of eligible women in Chicago instead of getting my heart broken again?” Severide just hasn’t found the person who’s going to be around for a long time, and he’s girding his armor against having his heart broken again.

TVLINE | Is Stella going to be around in his apartment a long time?
Stella is going to be around for a while in his apartment. The search for a new apartment is not quite going as quickly as she imagined it would be. But there are definitely feelings there, certainly feelings her way toward Severide, and over the course of the season, maybe she’s the one who can live up to the archetype in his mind of who he’s looking for.

TVLINE | Will the fire that erupted at Donna’s school be an ongoing mystery that Boden has to solve?
You’re going to find out a lot more about that fire [in the next episode]. Our theme this year is how your outside family affects your [firehouse] family, and Donna being so closely invested in the teacher that’s hurt and the fire at her school is going to cause some strain in the firehouse in Episode 2.

Chicago Fire fans, what did you think of the season opener? Grade it via the poll below, then hit the comments to back up your pick!