In the span of just a few months, Tom Keen has gone from leading his own spinoff series to possibly taking a dirt nap courtesy of Raymond Reddington. (And that’s to say nothing of his significant mommy issues.)

Though Tom didn’t have much screen time in Wednesday’s Season 5 premiere, he did make a crucial appearance at the end of the episode, and it dealt a potentially devastating blow to fans of Liz Keen’s baby daddy. After Liz and Red had wrapped up their Case of the Week — a surprisingly lighthearted adventure involving a carnie on the run — Liz returned home to find Tom, who she presumably hadn’t seen in months, at their apartment.

Once Liz had dropped the bombshell that Reddington is actually her father, Tom decided to table some big news of his own, pretending instead that his major announcement was, “I love you, Liz, and I’m never leaving you again.”

But just as Tom was making this very romantic promise, a disconcerting glimpse of the future indicated that he might not be keeping his word to Liz, after all: In a short flash-forward, we see Red and Dembe enter Tom and Liz’s apartment, guns raised. Red approaches a very bloody Tom, who is laying on the floor in bad, bad shape. Red fires his gun at Tom twice, and a close-up of Tom’s face shows his eyes locked on the ceiling. (Then, back in the present-day, Liz gives her beau a good-natured, but ultimately ominous warning: “You better not leave. I’ll kill you.”)

For the last two months, TVLine readers have been placing their bets on the answer to this Blind Item, which hinted that an hourlong broadcast drama would kill off a major character — via flash-forward, at least — during its season premiere. For those who guessed that The Blacklist would be the one to off a series regular, you can officially redeem those long-awaited bragging rights.

Of course, we didn’t actually see Red’s bullets hit Tom during that time-jump scene, nor did we necessarily witness Tom taking his last breath. So, all told, it’s possible that Tom is still with us by season’s end — even though he gets pretty banged up along the way.

We talked with series creator Jon Bokenkamp about that episode-ending twist, and though he wouldn’t confirm that Tom actually bites the dust in Season 5 — “You’re going to have to tune in to find out,” he offered — he did shed some light on how and why Tom will find himself in mortal danger this year.

TVLINE | Tom isn’t necessarily dead when we see that flash-forward, but it’s not looking good for him. Why go down this road with the character?
It was partly to give contrast to the lightness and the fun that Reddington’s having in rebuilding his empire. The show, I hope, is more fun this year. Reddington is really having a blast. But I didn’t want people to confuse that with the notion that we might somehow become a different show because we’re on at a different time period. We thought, “Why not give a taste of something that’s going to come?” People can see that it’s still a very strange and dark and dangerous and, at times, bloody show. We felt like that was a nice little tease of something big to come. We wanted to acknowledge to the audience that the journey Tom is starting on really puts him on a collision course with trouble. 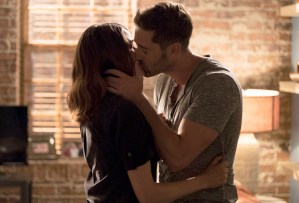 TVLINE | Can we expect to see him in most Season 5 episodes?
He’s a regular on our show and has been since the pilot, and he’s at the core of that strange triangle between Reddington, Liz and Tom. That relationship has always been fraught, and it’s certainly no better now that this paternity issue has been settled. It’s not like that made anything better. Reddington has had a number of times where he probably would have killed Tom if not for Liz’s love for him. So yes, Tom, and the journey that he is about to embark on, is a very important part of this season.

TVLINE | How much did the cancellation of The Blacklist: Redemption influence this storyline, since you had to work Tom back into the plot of the mothership series?
I do wish Redemption had come back, and I’m proud of what we did. In my mind, Scottie Hargrave and Howard Hargrave and Mr. Solomon are still out there, and that story is carrying on, and Tom simply pops back and forth between the two. If anything, it was harder to be without Tom toward the last part of Season 4, just because things were a little bit out of balance. Our storyline with Tom this season would have been the same, with or without Redemption. His trust for Reddington has never been very strong, and he is just as suspicious, if not more suspicious, than he’s ever been.

TVLINE | What was Tom going to tell Liz before she revealed the news that Red is her father?
He was going to tell her, “Mr. Kaplan had a big secret, she sent me to this bus locker and I found a suitcase full of bones.” That big secret that Mr. Kaplan wanted Tom to share with Liz — in the moment, he felt that the landscape had shifted under him, and even under Mr. Kaplan. They didn’t know this information, that the DNA report had come out and Reddington was her father. Tom finds himself in a place where he realizes she’s closer to Reddington than ever. She’s probably just going to talk to Reddington about this, and he’s going to find some way to twist and manipulate the situation. Tom, out of love for Liz, feels like this is something he has to solve and understand before he can put it at Liz’s feet.

TVLINE | Turning to some other aspects of this premiere, the episode had a real fun, light tone as Red took on this new case. Will that continue moving forward?
We’d kind of forgotten about this in Season 4 because things had become so dark, but it is just a condition of Red’s life that he’s curious and open and looking for new experiences. At the beginning of this season, he was faced with a real opportunity to rebuild his empire. Rather than curl up in the fetal position and draw the shades and hang out in the house, he wouldn’t waste this. He would see this as a real opportunity. That’s part of the coloring of this season. Personally, I love watching James [Spader] have fun. One of the things the audience loves is watching James just relish the strange, uncomfortable and weird situations that he finds himself in. We think the show is more fun that way, although we’re still going to have some really great, compelling and dangerous bad guys. We’re still a Case of the Week show.

TVLINE | How quickly does this blackmail situation between Agent Ressler and Henry Prescott take a turn for the worse?
That’s a really exciting storyline this season. Ressler fancies himself, and began as, a real Boy Scout. When we met him, he was the one hunting down Raymond Reddington. And now, he’s actually contracted with a blacklister to cover up a murder. It is a storyline that we think has legs. It’s going to be a slow burn, and we’re going to have a lot of fun unraveling it, and Henry Prescott is going to relish every moment of the fact that he owns Donald Ressler. And Ressler’s going to be put in some really compromising and uncomfortable situations. It’s not something we’re going to resolve immediately, and it does take a while to really unravel the magnitude of how compromised he is.

OK, your turn. Did you correctly guess the answer to our Blind Item? Do you think Tom will really die? Grade the Season 5 premiere in our poll below, then hit the comments with all of your thoughts and theories about the episode.