CBS on Wednesday introduced viewers to an elite SEAL Team, led by Bones vet David Boreanaz. Will you enlist?

Jason suffers from PTSD. As revealed in flashback, one of his men, Nate Massey (The Originals‘ Daniel Gillies), was shot and killed on a covert op. Jason blames himself, and he’s never quite gotten over it. He’s also developed a tick, randomly rubbing his upper leg — the spot where he first noticed Nate’s blood splatter on the night he was shot. He won’t open up to anyone about the trauma, not even during a mandated therapy session.

Shortly thereafter, we discover that Jason is separated from his wife, Alana (Law & Order: SVU‘s Michaela McManus), and their two kids, Emma and Conor. They are reunited at the first communion of Nate’s son Landon, but Alana’s efforts to get Jason to come back to the house are immediately rejected. She then tells him that Emma has a recital the following week, and she’d love it if her father were there. He and his fellow SEALs are then called into headquarters, where they receive their next assignment. 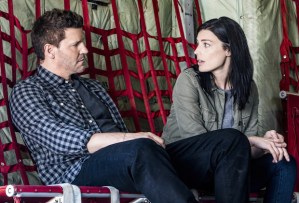 The team is sent to Liberia to apprehend high-level ISIS commander Abu Samir Al-Masri, who is in the country on business with Boko Haram. The CIA wants him taken alive, hoping to interrogate him for intel on fellow international baddies. The assignment is especially important to Mandy, who nearly caught Samir two years earlier but was forced to stand down to protect an asset. Days later, Samir blew up a school bus with dozens of passengers, and has since gone on to kill hundreds more.

Once in Liberia, Jason and his men initiate ground recon, only to discover that Samir has a hostage: a non-profit worker by the name of Stacey Marshall, who was abducted one year earlier in the Republic of South Sudan. This, of course, complicates the assignment, which now doubles as a rescue mission. They manage to rescue Stacey just in the knick of time, then get led by trained canine Severus down into a tunnel where they find Samir wearing a suicide vest. Without hesitating, Clay shoots to kill, and lodges a bullet between the terrorist’s eyes. Jason, however, is furious. Samir’s thumb wasn’t on the detonator, and he’s convinced they could have taken him out alive, per orders. Ray is eventually able to talk him down, suggesting that any one of them would have taken the shot.

Afterwards, Jason returns home, arriving at his Emma’s recital just in time to hear her sing. He finds a seat separate from Alana, who looks over to him just as he begins to rub his leg.

Is SEAL Team a worthy follow-up to Bones for David Boreanaz? Grade the series premiere via the poll below, then hit the comments to flesh out your thoughts.