Let’s get this unpleasantness out of the way: Kevin (Probably) Saves the World is a terrible title. It’s too cutesy by half — has any show with parentheses in the title ever survived to see a Season 2? — and also misleading, seeming to promise some kind of epic, globe-spanning battle of good vs. evil. ABC’s new dramedy (premiering Tuesday, Oct. 3 at 10/9c) is most assuredly not that… but it’s not bad, either, thanks to a sweet soulfulness and a thoroughly charming lead performance from Jason Ritter.

Ritter stars as Kevin, a scruffy cynic who returns home to crash with his sister Amy (JoAnna Garcia Swisher) and recover from a nasty break-up… and a suicide attempt. (“Didn’t take,” Kevin morbidly jokes.) Amy is welcoming, but her teen daughter Reese (Chloe East) is sullen and standoffish; Amy’s husband died recently, and the wounds from that are still fresh. But when a meteor crash-lands nearby, Reese joins Kevin to check it out — and when he dares to touch the smoldering space rock, he’s launched a hundred feet through the air and immediately blacks out. 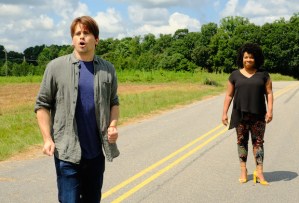 It’s here that Kevin unfurls its admittedly goofy premise: 35 of these meteor strikes happened simultaneously across the globe, and Kevin is soon visited by “warrior for God” Yvette (Vice Principals‘ Kimberly Hebert Gregory), who informs Kevin he’s the last of “the 36 righteous souls,” and he’s been chosen to anoint 35 new souls… with a hug. (The Kevin-Yvette relationship does veer uncomfortably close to the cliché of a magical person of color who only exists to help an aimless white guy find his life’s purpose.) A spirit only seen by Kevin, Yvette is like his metaphysical life coach, encouraging him to lose his attachment to material possessions by sending a tractor to flatten his luxury car.

The snappy, emotionally astute pilot script from creators Tara Butters and Michele Fazekas (Agent Carter) isn’t afraid to get a little loopy at times — which is what this material requires. And I appreciate that Kevin is about real people and relatable problems (albeit with a supernatural bent), rather than giving us more of the usual lawyer/doctor/cop procedural plots. The show boldly wades into huge topics like spirituality and morality and asks the big, unanswerable questions (“Why are we here?” “Is there more to life than this?”) that most TV shows are too timid to approach. I won’t predict a This Is Us level of success for Kevin — it’s too offbeat to catch on like that — but it hits some of the same heartwarming, emotional notes, and more of that is always welcome in primetime. 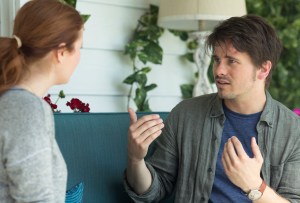 It’s probably Ritter’s immense likability, though, that keeps Kevin‘s eggshell-fragile structure from crumbling. A gifted actor, Ritter has never really gotten the great leading role he deserves; he’s either been wasted on short-lived series (The Event, The Class) or reduced to supporting roles in ensemble dramas (Parenthood, Joan of Arcadia). But Kevin makes full use of his talents: Ritter is hilariously frantic as Kevin struggles to make sense of his new mission — it’s impossible to watch him do physical comedy and not see shades of his legendary father John Ritter — and he has an openhearted earnestness that makes the dramatic scenes work, too. It’s a superb, complex performance, and Ritter’s commitment to the material goes a long way towards selling us on a far-out premise.

Plus, Kevin‘s dialogue is sprinkled with doses of biting humor that cut through all the self-help schmaltz. (“I think everything is beautiful, and I don’t like it,” Kevin says after gaining a newfound appreciation for the world around him.) Ritter and Garcia Swisher have a genuine, combative brother-sister chemistry together, and glimmers of actual spiritual insight peek through at times. Yes, this kind of thing can easily get too touchy-feely, but ultimately, I was won over. Kevin could very well end up baffling viewers on its way to a swift cancellation, but if given a chance to find itself, it has real potential. At least it has the courage to be proudly, defiantly weird. The exact rules of Kevin’s spiritual awakening are a little fuzzy, and I’m not totally sure where all of this is headed… but that’s kind of exciting, too, isn’t it?