For someone who won’t be of legal voting age for another 10 years, Fuller House‘s Max sure does spend a lot of time thinking — and talking — about Donald Trump. But how exactly does D.J.’s middle son feel about the reality star-turned-POTUS?

To figure that out, let’s start at the beginning: Max’s Trump-session dates all the way back to the opening scene of the Feb. 2016 pilot, when he tries to prove his maturity to D.J. by telling her, “Relax, mom! I already know all the bad words: darn, booger and Donald Trump.” He later ends the scene by telling Kimmy that her bare feet, propped up on the kitchen table in true Gibbler fashion, “smell like Trump.”

These first two mentions would lead most people to believe that Max — despite dressing like a young Alex P. Keaton — is not a fan of Trump’s politics. But then some other stuff happens…

Like when he chooses this curious slogan for his science presentation in Season 2: 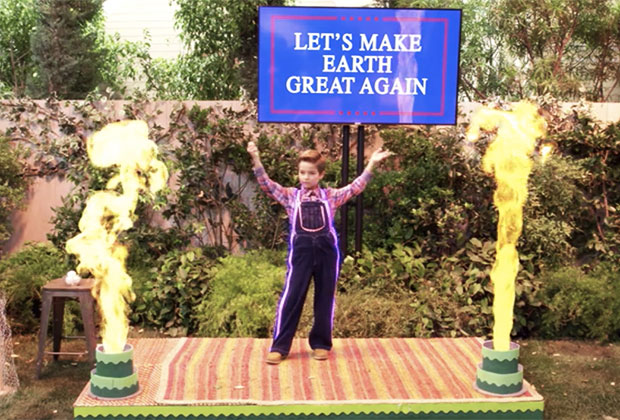 Or when he builds a wall in his bedroom to keep older-brother Jackson from invading his space in Season 3:

But rather than speculate about Max’s political leanings, TVLine went straight to series creator Jeff Franklin for the truth.

“I think that he’s an independent,” Franklin concludes. “He clearly believes in climate change, he believes in science. But on the other hand, he’s a little entrepreneur, a young businessman. If I had to come down on anything, I’d say he’s an independent and prefers to research each issue fully and make an informed decision, one issue at a time. He does, however, dress like a young Republican. … Then again, he’s the son of a fireman. He’s got blue-collar roots. I think we’re going to have to see where he goes.”

Your thoughts on the politics of Fuller House? Drop ’em in a comment below.