Season 2 of ABC’s Designated Survivor, TVLine reported in August, will fade out the freshman hit’s conspiracy storyline, leaving unlikely POTUS Tom Kirkman at the center of a more West Wing-like drama. But how does that actually look, in the first two episodes made available for critics?

Wednesday night’s premiere was perhaps the more extreme example of the “straight” Season 2, whereas next week’s episode highlights — if only to wrap up — the 24-like hunt for Patrick Lloyd, the mastermind behind the tragic Capitol bombing that landed Kirkman in the highest office in the land.

Set on the first anniversary of Kirkman taking office, and just as the Capitol’s expensively expedited reconstruction was being completed, the opener focused on a Russian plane hijacked by Ukrainian separatists, with an estranged college friend of Tom’s among the passengers. (Some time ago, the two had a falling out when Tom “sold out” and left the Peace Corps to pursue a political track.) It turned out that the terrorists were secretly hired by Russians (to potentially trigger a war), but the instant that Kirkman got wind of the ruse, he called both ambassadors on the carpet and (with some self-taught Russian sprinkled in) demanded a détente. Alas, in a tragically ironic twist, the accidental explosion of an oxygen tank aboard the plane, after it had been almost entirely evacuated, claimed Tom’s doctor friend among its two casualties. 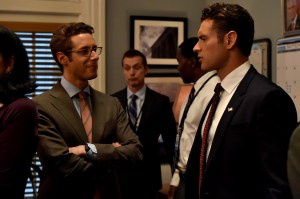 Elsewhere in the premiere, we and the staff met Lyor Boone, whom Chief of Staff Emily had recommended to serve as the utterly aimless administration’s much-needed political director. Played by new series regular Paulo Costanzo (Royal Pains), Lyor on the surface appeared to be rife with eccentricities and pet peeves, but just as Seth and Aaron were nudging Emily to give this odd bird the boot, Lyor (somewhat predictably) proved himself to be super-observant and savvy — which is nice, since POTUS had already greenlit his addition to the staff. Also, Emily caught Seth in a lie about a job interview (though he eventually reaffirmed his loyalty), and a controversial writer got shuttled around from room to room, West Wing C-story style, while awaiting an audience with the president.

On the conspiracy side of things, a scattering of scenes showed Hannah tricking her way into MI6 agent Damian Rennett’s Amsterdam apartment, only for the two to realize they share a common target in Patrick Lloyd. After chasing one dead lead, a trail of high-powered computer sales led the duo to Lloyd’s freshly vacated lair — just as the terrorist himself was resurfacing in D.C.

Again, Episode 2 (airing Oct. 4) will flip this week’s mix by zeroing in on the hunt for Lloyd, which coincides with the White House Correspondents Dinner (and Seth’s warily-received preparation of bad jokes for the president). That storyline’s ticking-clock climax leaves behind a seed for a new, TBD mystery of sorts; as the series’ new showrunner told TVLine, Hannah’s Season 2 arc, alongside Damien (new series regular Ben Lawson), will acquire more of a John le Carré feel.

All told, the “new-ish” Designated Survivor seems serviceable, if not (though understandably) in the same league as the venerable White House drama it aims to emulate. Between The West Wing, House of Cards, Madam Secretary and even 24, its political crises will have to be pretty clever to show us anything we haven’t seen before. (That’s where a Josh Lyman type such as Lyor could come in handy, as a uniquely knowledgeable voice in Kirkman’s ear.) And while the conspiracy behind the Capitol bombing had its foibles, it did set this show apart from the pack and surrounded Kiefer Sutherland with a thriller element which his 24 fans found nicely familiar. Are we more concerned that Maggie Q now won’t have enough to do, or that her storyline will be isolated from the main goings-on?

Also, there are two big question marks on the horizon: What is the midseason/Episode 10 “event” that will, as Sutherland promised, “knock [our] socks off”? And will [Spoiler]’s announced exit (at some point during or at the end of Season 2) make dramatic sense?

THE TVLINE BOTTOM LINE: As a weekly watch, Designated Survivor still gets our vote — depending on how its new, Season 2 “platform” shapes up.