“Look, it was time for her to move on. It just was. You need to make peace with it.”

Those were Voight’s words of advice to Halstead during Chicago P.D.‘s Season 5 premiere on Wednesday — but did they also help you come to terms with Sophia Bush’s departure as Detective Erin Lindsay?

Rather than skirting over the obvious absence, the episode opens with a Lindsay montage that acts as both a recap and a tribute of sorts to the character. It also leads, pretty seamlessly, into Halstead finding a photo of him and Lindsay during happier times in her empty apartment. He’s not particularly shocked by the stark space, so clearly some time has passed since she left. But that doesn’t mean he’s dealing with it very well.

He tells Voight he left Lindsay a message, but she never responded to it. “She’s not coming back, is she?” he finishes. That’s when Voight tries to dispense some wisdom despite struggling himself to cope with Lindsay’s goodbye. “I know I had no choice. She had to go,” Voight says (to his therapist?) before confessing that he’s feeling lonely. (Voight talking about his feelings with a professional? Gasp!)

But that’s just the beginning of Halstead’s troubles in the season opener. While trying to catch a gang member, he accidentally shoots an innocent, African-American girl, who later dies. With racial tensions at an all-time high in the community, “this city needs someone to blame,” and that person is going to be Halstead, alderman Price (Suits‘ Wendell Pierce) declares. Voight advises Halstead to take some time off while they deal with the situation, which has the ACLU and NAACP demanding that the detective be fired. 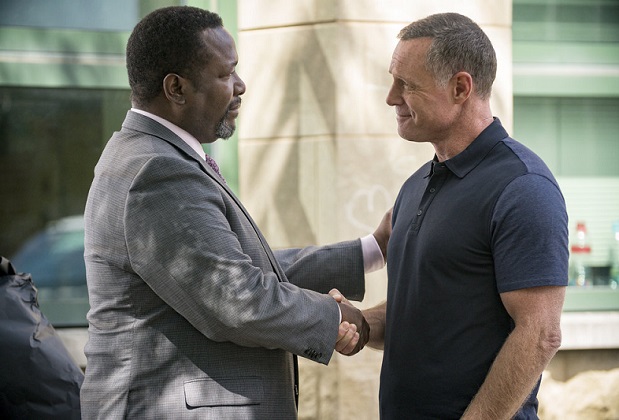 Voight ends up making a deal with Price after they catch the gang leader: Price backs off Halstead, and in exchange, Voight backs off the gang’s lookout, who is actually the brains behind the operation and keeps the money coming into the alderman’s campaign. (Yes, the alderman’s neighborhood projects are being funded by gangs because “rich, white folks aren’t pouring cash into this war.”) As for the gang leader, Price tells Voight to “bury his ass.”

Halstead is then given the seal of approval by Price during a press conference, after which his partner Upton reveals that she was once in a similar situation with a victim. She asks if he’s talked to the little girl’s mother yet. He hasn’t. “You’re never going to be ready. You just have to do it,” she says. So a tearful Halstead knocks on the mom’s door, hands over the girl’s necklace, and says, “I’m very sorry.” 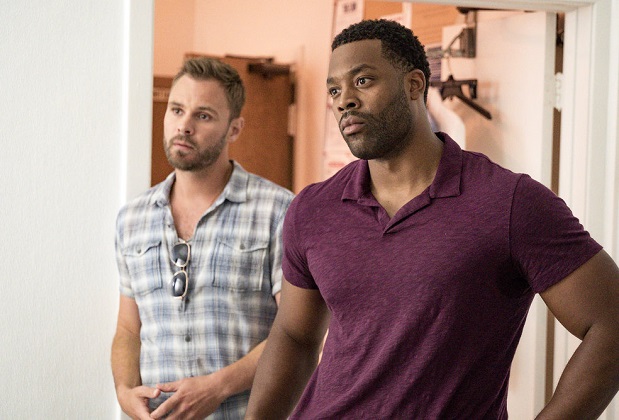 * Ruzek almost starts a race war when he pulls out a gun and demands that a black man get down on his knees in front of his son. It turns out the man did not have a weapon, but was reaching for his cell phone. Atwater calls his partner’s behavior “a little belligerent,” while Ruzek thinks it’s “better to ask for forgiveness than permission.” Speaking of Atwater, he was totally flirting with that morgue worker/tipster, right?

* Ruzek tries to start things up again with his ex Burgess, but she reveals that she met someone. (Do you think she was actually bluffing to rebuff Ruzek’s advances?)

* Antonio goes undercover for the case of the week. He admits that he’s a little bored with the D.A. office’s long-tail investigations, so Voight offers him a spot back on Intelligence, which he accepts.

Chicago P.D. fans, what did you think of the season premiere? Grade it via the poll below, then hit the comments to back up your pick!