If you’ve spent your summer fretting about The Mick‘s titular train wreck and her flock of yuppie charges, allow me to put your mind at ease — at least as far as the children are concerned.

Sure, the Fox comedy’s first season ended with the Pemberton’s mansion burning down (with all of Mickey’s money inside), but star Kaitlin Olson assures TVLine that where there’s a trust fund, there’s a way.

“This is why we threw that line into the finale where Christopher said something like, ‘The kids are more than taken care of,'” Olson tells us. “You know they’re going to be OK, there’s some sort of trust fund going on. But I do love that Mickey thought she was going to be rich, only for the money to be gone in five minutes. We’re shooting Episode 5 right now, and Mickey’s still figuring out where they’re going to live. It’s been really fun exploring all these different options. Plus, the kids still have to go to school — and now everyone knows that their parents are in jail and that their house burned down.”

Below, Olson previews more of what’s in store for Season 2 (premiering Tuesday at 9/8c), including a peek into Mickey’s past:

TVLINE | This seems like such a fun show to work on. How’s Season 2 going?
The thing that stands out to me the most while we film Season 2 is reading Chip’s dialogue. Our writers have had so much fun with that character. He has the most unbelievable lines this year — I don’t think I’ve laughed harder at anything. That character is so ridiculous and awesome to me. Tommy [Barbusca] is really getting a handle on this character and it’s incredible.

TVLINE | And what about Ben? [Actor] Jack Stanton is so young — do you ever feel like you’re ruining him with all the insane things you have him do and say?
[Laughs] Well, I also have two kids — two little boys — so I’ve been really prepared to have the most eloquent kid-based answers for when he asks. But he just kind of shows up and plays and says his lines. He doesn’t really ask at all, it’s awesome! But trust me, I’m all ready to go if he does. He’s having so much fun, I don’t think he’s really understanding what’s going on or what he’s saying.

TVLINE | Did you notice any growth spurts between seasons?
Oh, totally. Jack’s teeth are all in! Last year, he had this adorable jack-o’-lantern mouth because he was missing so many teeth. And Thomas is now 14-and-a-half. His voice has changed, he’s figuring stuff out, his hair’s different. They’re all so much fun — and they’re so much fun to tease. We’re all really happy to be back.

TVLINE | But no more mansion this time around?
[Laughs] I’m not going to ruin the entire thing for you, I’m just letting you know that we’re going to figure it out. 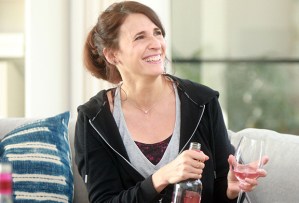 TVLINE | Speaking of figuring things out, what’s happening between Jimmy and Mickey?
That’s one of the things, as an actor, I was always confused about. I wanted to explore that this year, so in Episode 2, Mickey becomes friends with one of the neighbors, played by Michaela Watkins, who’s amazing. She takes an interest in Jimmy, and Mickey’s like, “Awesome, have a crack at him.” It’s an episode that gives you a chance to explore what this relationship is.

TVLINE | I feel like there’s so much about their history we don’t know yet.
Totally. We’re actually shooting an episode this season where we go back to Warwick, so you can see where Jimmy and Mickey come from, who their old friends are. I’ve been wanting to look into their backstory for a bit.

TVLINE | I also love Mickey’s friendship with Alba. How is that dynamic going to shift now that they’re out of the mansion?
What I love about Alba is that in her desire to emulate Mickey, because she loves her so much, she just starts to turn into a disaster train wreck of drugs and alcohol. We pick back up with that dynamic, and I like exploring how Mickey feels about that. The obvious answer is that she wouldn’t care. I also like the idea that Alba almost becomes irritating to Mickey. But Alba’s always going to be her partner in crime; I love Carla Jimenez’s drunk acting, so we try to do as much of that as possible. 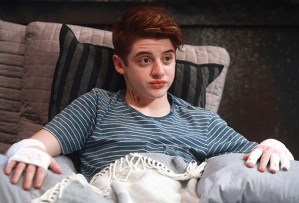 TVLINE | Lastly, we learned in the finale that Chip isn’t a full-blooded Pemberton. The main characters weren’t around when that was said, but will it still be explored further?
No, they were not. And I love that it was just a little thing that was dropped. There will be more little things dropped, and we’ll eventually explore that. I love it, and I think it’s hilarious — mainly because Chip identifies as a Pemberton more than anyone. And he loves his daddy, even though he won’t call or check in on him. … It’s going to be a big through line of this season.

TVLINE | I mean, that fiery red hair should have been a giveaway at some point.
[Laughs] We’re not even halfway through our second season, so we haven’t figured everything out, but we’re kicking around ideas about who his actual father could be. It’ll be a really fun story to execute.

Your hopes for The Mick‘s sophomore outing? Drop ’em in a comment below.