If FX’s American Crime Story or Lifetime’s Who Killed JonBenét? haven’t satisfied your craving for true-crime dramas, NBC made an attempt to do so on Tuesday via the aptly-named Law & Order True Crime, the latest installment of Dick Wolf’s long-running franchise.

True Crime is an anthology series, with plans to focus on a different real-life scandal each season. First up? The high-profile 1989 murders of José and Kitty Menendez, for which their sons, Lyle and Erik, were (spoiler alert!) ultimately convicted. Before you tell us your thoughts on the first episode, here’s what went down in the series premiere:

Tuesday’s debut wastes no time in showing us the series’ central tragedy. Though we don’t see their faces, two men walk into the living room of the Menendez household, where José and Kitty are watching TV on the couch, and end their lives with a substantial number of shotgun bullets. The next thing we hear is Lyle’s voice, telling a 911 dispatcher through panicked sobs that he and his brother came home to find their parents dead.

To most of the Beverly Hills community, the reason for José and Kitty’s deaths is obvious: José bought a company that had ties to the Mob, he got caught up with the wrong people, someone had a vendetta, yadda yadda yadda. But throughout this first hour, enough evidence piles up to suggest — at least to the case’s lead detective, Les Zoeller (Parenthood‘s Sam Jaeger) — that it was actually Lyle and Erik who offed their own parents. 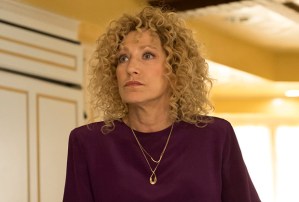 Take, for example, the fact that Erik (Gus Halper, Power) told the police he could smell gun smoke in his parents’ living room when he found their bodies… but Erik and Lyle (Miles Gaston Villanueva, The Young and the Restless) supposedly didn’t arrive until two hours after their parents were killed, and the open window photographed in the living room would suggest that any gun smoke odor should have blown away with the breeze by the time the boys showed up.

Or, consider the sons’ odd behavior in the days after the murders. Showing up at their parents’ house — a bloody, disturbing crime scene — just to pick up their gear for tennis practice? Lyle’s liberal use of his late father’s company credit card? (Actually, everything Lyle does in this episode is suspicious. Outside of the 911 call, he barely bats an eyelash at these life-changing tragedies while Erik spends most of the hour in hysterics.)

Of course, the brothers’ puzzling actions aren’t enough to make them official suspects — until Zoeller and his partner, Det. Tom Linehan, zero in on a possible motive: money! (Duh.) They discover that Erik and a former classmate once co-wrote a screenplay, at Erik’s suggestion, about a young man who kills his parents in order to inherit their fortune. The script even features an emotionless, hard-to-impress father, which sounds heavily influenced by Erik’s actual relationship with José.

What’s more, even though Erik and Lyle were supposed to be taken out of their father’s will, they’ll actually be inheriting $14 million from their old man; as far as Zoeller and Linehan can tell, the brothers wiped their dad’s updated will from his computer, ensuring that only the original version of the document — the one that guaranteed them some serious moolah — remained.

It isn’t just the detectives that are keeping a close eye on the Menendez brothers in this hour. It’s also defense attorney Leslie Abramson (The Sopranos‘ Edie Falco), who doesn’t interact with the boys in the premiere, but is clearly already plotting how she’ll defend them in court. After seeing Lyle and Erik on a TV news report, she immediately waves off her husband’s suggestion that the Mob killed José and Kitty, replying, “No. Those boys did it.”

In the final moments of the episode, Erik pays a visit to his parents’ house, after his cousin has had the scene of the crime sufficiently cleaned. As Erik looks around at the white furniture and framed family photographs, he imagines (or remembers?) the gruesome way in which his parents died, the mental images of which are enough to send him into a tearful panic attack on the floor.

OK, your turn. Did True Crime‘s premiere do enough to hook you? Grade Tuesday’s debut in our poll below, then hit the comments to back up your choice.