With Season 8 arriving this Friday at 9/8c, TVLine presents veritably all of our Fall Preview Q&A with showrunner Peter M. Lenkov, who surveys Five-0’s processing of this double departure, sets up the new hires, teases a “very emotional” backstory for a veteran team member and more. 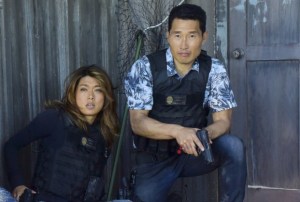 TVLINE | When the season opens up, how fresh will Chin Ho and Kono’s respective exits have been? Has time passed? Is the team at the acceptance stage?
I don’t think anybody has accepted it; I think they’re still sort of in that period of trying to accept the fact that the team has changed. The dynamic has changed. There are a couple scenes where they do reference them and how much they’re missed, but they are happy for where they are in their lives and stuff.

TVLINE | Will it have turned out that Chin Ho and Kono happened to leave at the same time? Or after Kono left to chase the sex traffickers, did Chin take the San Francisco task force job weeks later?
Chin accepted the job off screen, and Kono was already gone by then. I would imagine that in our world [the cousins] probably had many conversations about it while she was on the mainland and he was in Hawaii. 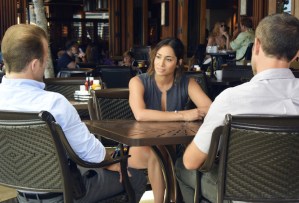 TVLINE | How would you differentiate the way we meet Tani (played by Meaghan Rath), a hotel lifeguard, from how we first met Kono back in the day? On paper, the scenarios seem similar-ish….
The difference is that Kono was in the police academy on the verge of graduation, and Tani was kicked out of the police academy. Where Kono was more of a by-the-rules kind of cadet, this woman is not that by any means. She’s more the McGarrett, the female McGarrett. 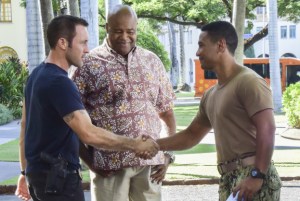 TVLINE | Steve doesn’t immediately say, “Sure, come on board.”
No, he sends him to the police academy to go through training. He says, “If you graduate, I’ll find a spot for you.” But it’s not that easy because Junior has brought back some stuff from serving that doesn’t make it an easy transition.

TVLINE | What is the Case of the Week for the premiere?
We burn down the island! We set fire to the island. I mean, we’ve done everything else! The idea is that Duclair (returning guest star Randy Couture), this pyro that we’ve had in a bunch of episodes, ends up getting out of prison — and it’s an interesting story how he gets out of prison. We’re pursuing him when he ends up going inland and starting a fire to get away from us, and it gets out of control and becomes this massive wildfire. It’s moving from the central part of the island to the outside, so if you’re looking from the water you’re just seeing this big trail of smoke coming out, like the whole island is going to be on fire. 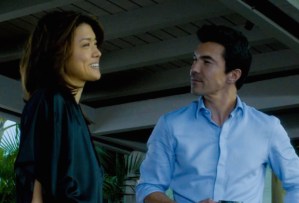 TVLINE | Adam being a part of team, as has been reported, is somewhat logical — he’s got the skills, he knows everyone, he’s a good person…. But there is the sticky wicket of how someone with his checkered past can be an official part of Five-0. Is that addressed?
Here’s the thing: When he first comes back to the show, he’s not involved in any case work. But ultimately there’s this big storyline involving organized crime and that’s when he comes in, because that is a world his father was in, and he knows a bit about. So he sort of becomes the head of this task force within the task force, looking into organized crime to identify the new players. We’re utilizing his expertise and his knowledge of that world.

TVLINE | How does he rationalize it?
That this is her legacy, what she’s doing. That what she’s doing is the right thing for her to do, and when she’s done with it she’ll be back and they’ll be able to put all this bad stuff behind them and start a family.

TVLINE | What fun or interesting dynamics are you seeing in dailies so far?
The thing that’s really fun is Danny and McGarrett, who have talked about opening a restaurant. A big part of last year and this year is talking about people’s legacies and what they leave behind, and they have talked about going into business together. So they start this side project that is a lot of fun for them to be doing. It’s a long-term thing — and who knows, the way they’re sort of going at each other and given their different points of view with regard to building this business as something to retire into, it may never even happen. Because it’s just one hurdle after another.

TVLINE | Or… to save Alex O’Loughlin’s weary knees, the show transitions into a multi-camera workplace sitcom about them running a restaurant.
[Laughs] Yes, down the road. Yes. Many years. Season 15!

TVLINE | Any personal runners for any of the other characters?
There’s a fun sort of Christmas episode that Danny and Charlie are front and center on…. Grace is still dating Will, Grover’s son…. And we have a really great, very emotional story for Grover this year, where we’re going to see what really got him to move to Hawaii. We sort of hinted at it a couple of years ago, but we’re going to see that story unfold.