Suggesting superstitiously that Season 13 of The Voice would be unlucky was a silly gimmick, I thought — until in the premiere, the coaches all passed on my two favorite contestants of the night: Xaris, a teenage folk singer who’s as much of a gem as Jewel, and Odiseas, who returned from his Season 3 tryout with enough star power to light up a constellation. But it was still nice to have Miley Cyrus back on the panel — and not to have to listen to Gwen Stefani pitching female vocalists on joining her team with compelling arguments like, “You’re a girl, and I’m a girl, and you know… girls!” And it can’t be overstated what a welcome addition to the panel Jennifer Hudson is. Not only is she as funny as she is talented — which is really saying something — but her enthusiasm is contagious, especially when she’s so excited about a number that she throws a shoe at the performer. “Where I come from, y’all, that’s a compliment,” she explained. “When you sing like that, you’d better be prepared to do what? Duck.” Which vocalist (first) got JHud so wound up? Read on, and we’ll review all of the singers who’ll be advancing from the Blind Auditions to the Battles, then you can pick your favorite in the poll that follows. 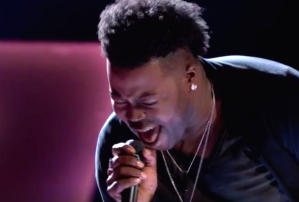 Chris Weaver (Team Jennifer), “Try a Little Tenderness” — Grade: A- | The New York worship leader/drag queen — well aware that that was one of the stranger day job/night job combos in existence — had Adam Levine’s chair turning within the first coupla notes. And with good reason. He didn’t just deliver a smoky rendition of the Otis Redding classic, he set it on fire, inspired the enthusiastic shoe-throwing detailed above and probably ensured that he’d never be made to lip-synch for his life.

Mitchell Lee (Team Blake), “Hold My Hand” — Grade: B- | Pursuing music in memory of his late mother who never saw him as the dentist he’d once studied to be, this Nashville woodworker sounded like a sure thing for Team Blake (Shelton) from the minute he opened his mouth. But, while there wasn’t technically a bum note in the performance, it wasn’t exactly thrilling, either. Lucky for him, the judges all thought he was the hottest thing since Ty Pennington.

Janice Freeman (Team Miley), “Radioactive” — Grade: B | Although the throaty, low tones of the cancer survivor’s voice were ear-catching from the start, it appeared for a while that she’d made a misstep in choosing to try to slay Imagine Dragons; the performance just wasn’t gelling. By the end, it came together and took off, allowing her to really let loose and show her chops. But it certainly suggests that Miley will have to be extra careful picking songs for Janice. One size does not fit all.

Shi’Ann Jones (Team Jennifer), “Drown in My Own Tears” — Grade: A- | JHud swiveled for this huge-voiced 15-year-old within milliseconds — a record, she insisted — and then playfully tried to warn her fellow coaches not to turn their chairs for the youngster that she fancied could be a Mini-Her. (Only Blake didn’t listen.) However, while Shi’Ann memorably took us to church, does she really have a prayer? You told me last season that kids don’t tend to fare fantastically in the long run. On the other hand, Brennley Brown made it to the semifinals and Aliyah Moulden, to the finals. 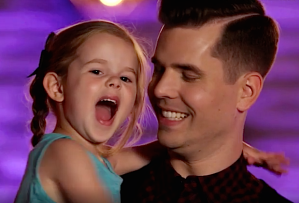 Dave Crosby (Team Adam), “I Will Follow You Into the Dark” — Grade: C | Thanks to the YouTube star, famous for his duet of “You’ve Got a Friend in Me” with 4-year-old daughter Claire, I now know what it would sound like if Wonder Bread sang. Can’t believe he and his breathy voice got chairs turning, but Xaris and Odiseas didn’t. Is he a nice fellow? I’m sure. But a captivating performer with a remarkable voice? Yeah, no. I’d sooner have put Claire through to the next round.

Esera Tuaolo (Team Blake), “Rise Up” — Grade: A- | Once a closeted NFL player, “Mr. Aloha” scored a touchdown with his rock-solid Andra Day cover, then went for and got the extra point by pulling off a note that seemed to go on longer than a commercial break. Not sure if the ginormous baller has the charisma to go to the finals, but then, once upon a time, I would’ve said that about Jesse Larson, too (and we all know how that worked out).

Brandon Showell (Team Adam), “There’s Nothing Holdin’ Me Back” — Grade: B | The cruise-ship-singer-turned-English teacher has a fine voice, and when he was doing that growly thing that I’m a sucker for, even an interesting one. But — and no one could fault him for being nervous — he looked about as uncomfortable in his own skin as Odiseas looked at home in his. And isn’t that, at least in part, the difference between a good singer and a big star? 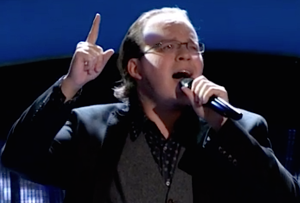 Lucas Holliday (Team Jennifer), “This Woman’s Work” — Grade: A- | Proving he has balls to spare, “Luke the Singing Cashier” — once a viral sensation, thanks to his checkout-line Maxwell cover — chose the R&B singer’s take on Kate Bush for his audition. And didn’t just choose it, nailed it, offsetting a startling falsetto with a deeper register that didn’t even sound like it had come out of the same person. So good, I’m gonna give him a pass on the dubious, mullet-y hairdo that reminded Blake of Frasier Crane.

Brooke Simpson (Team Miley), “Stone Cold” — Grade: A- | “I thought I knew singing,” said Jennifer, “until you just came out here and did that.” In other words, the Native-American vocalist’s Demi Lovato cover, performed admirably with as much passion as control, went over well. Brooke doesn’t have Janis Joplin’s raspiness, but there’s still a JJ quality to her that works.