After 16 long weeks of backflips, pliés and high kicks, So You Think You Can Dance reached the end of its 14th season on Monday night, at last bestowing the title of America’s Favorite Dancer upon one of the four finalists.

But before we could find out whether Koine, Taylor, Lex or Kiki was the Season 14 champ, SYTYCD stayed true to its finale form, offering up a two-hour stroll down memory lane before unleashing a confetti shower upon the eventual winner.

In the meantime, here’s how those 120 minutes were filled:

* Each judge picked two memorable routines that they wanted to see again, ranging from Lex and Taylor’s lovely classical jazz to Kiki and Koine’s flirty salsa. There was also an encore of several group performances, which weren’t reprised live, but were sadly relegated to pre-taped footage from whatever live show they came from originally. (This bummed me out the most for Mark Kanemura’s now-iconic “Call Me Mother” group routine; if you’re going to drag Jasmine Harper out on a majestic cape, you better let her do it live both times, okurr?) 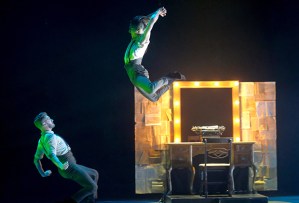 * The four remaining All-Stars also got to have a second go-round with their favorite routines of the season: Marko picked his “clothes hanger” contemporary piece with Koine (because it would have been utter blasphemy for him to choose anything else); Gaby opted for an encore of her and Lex’s hip-hop (the last 15 seconds of which I could watch on an eternal loop); Jenna reprised That Very Sexy Cha-Cha with Kiki; and Robert closed out the nostalgia trip with his and Taylor’s gorgeous contemporary set to “Make You Feel My Love.” In summary, there were a lot of emotions packed into this finale. I hope you had some Kleenex handy.

* As for new routines, Mia Michaels returned once more to choreograph a performance for the Top 10 and their All-Stars that gave off serious group-therapy vibes. Plus, Travis Wall and Lex debuted a positively entrancing Dr. Jekyll/Mr. Hyde-esque piece, pictured at right, that is sure to inspire many a YouTube visit to fill the imminent Monday-night Dance void.

* And then, at long last, it was time for the results, which shook out like this:

After last week’s performance finale, 61 percent of you said that Lex would win Season 14, with 55 percent saying he should win. My hat’s off to you, TVLine readers; when you’re right, you’re right.

That’s a wrap on SYTYCD! Do you agree with Lex’s win? If not, who were you pulling for? Cast your vote in our poll below, then hit the comments with all of your thoughts on Monday’s season finale.