You could have given me a million guesses as to how Scorpion would open its fourth season, and it would take me at least 999,997 of those attempts to ask, “Does it kick off with a musical number?”

Indeed, the CBS series returned for Season 4 on Monday night, picking up just a few hours after last May’s final scene, in which newly minted couple Walter and Paige finally got some privacy after being stuck on an island with Team Scorpion for weeks. The morning after, Paige — showing an enviable lack of bedhead — softly asks Walter how he’s feeling about their new relationship… and he’s so stoked about it, his mind actually conjures up a fantasy song-and-dance sequence about their love for each other!

Of course, this wouldn’t be Scorpion if the lyrics weren’t incredibly nerdy: “I feel mighty groovy, I feel mighty fine ’cause you’re sweeter than a pie.” “Like 3.14159!” But, hey, if you were feeling at all nostalgic for Katharine McPhee’s Smash days, this musical number must have been heaven… excluding Toby, Sylvester and Cabe’s flamenco costumes, of course.

But Scorpion‘s unexpected foray into musical theater wasn’t the only surprise on Monday’s premiere. Shortly after Walter is snapped out of his dream sequence, he receives a call from the team’s longtime nemesis Mark Collins, who you may recall is in federal prison after trying to kill Toby not too long ago. But when Mark urges Walter and the rest of the team to visit his jail cell, explaining that he’s got an urgent case for them to look into, Walter reluctantly agrees…. and it’s a really good thing he does. 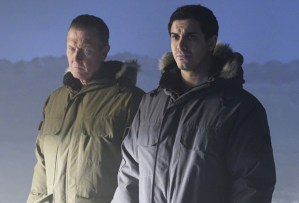 As Mark explains to Team Scorpion, a recent earthquake under the Arctic Ocean has triggered what’s called an “extinction event” — in other words, a natural disaster that could potentially wipe out a good chunk of the population if it isn’t stopped soon. Thanks to the earthquake, significant fissures have been formed in some Norwegian ice blocks, and if too much methane is released from those cracks… well, you know the rest. Nothing good happens.

After the team begrudgingly allows Mark to join them on the case — after all, he’s the only one who knows literally anything about this potential apocalypse — they head to Norway for a particularly harrowing couple of hours. The nitrogen hydroxide that they need to stop the methane is leaking! Cabe has to throw himself out of a moving vehicle! Toby literally gets trapped under ice!

But somehow, all of those awful experiences pale in comparison to the uncomfortable turn that Walter and Paige’s relationship takes in the premiere episode. Even though Walter was recently so happy that he was willing to dance about it, 500 Days of Summer-style, he and Paige can’t figure out how to be a couple and be coworkers. Paige first asks him why he didn’t consult with her about bringing Collins on the trip to Norway, and he informs her he doesn’t need anyone’s permission to do that, since he’s the founder of the team. Later, things get even more awkward when Walter critiques his girlfriend’s job performance within earshot of his other colleagues. It’s… not a good look.

In fact, it doesn’t seem that this season debut is meant to leave us in a happy mood. After Collins narrowly escapes death via flaming truck, and the team is finally able to slow the spread of the methane, Walter and Paige eventually acknowledge the cloud that’s been hanging over their relationship all day. Paige, who just weeks ago told Walter that she was in love with him, is suddenly worried that they’re too different to actually work as a couple. Walter, on the other hand, believes that if they can literally stop an extinction event from wiping out half of Norway, surely they can find a way to navigate their relationship troubles, right? Right?

Paige doesn’t seem entirely convinced that she and Walter are destined for happiness, after all… and just when it seems that she’s kinda starting to see Walter’s perspective, Happy has a terrible announcement for the group: One of the earthquake’s recent aftershocks triggered hundreds of methane geysers to open, not far from where the team is standing. Not only did they fail to stop the methane in the first place, but they now have mere hours until the earth’s atmosphere warms to a dangerous temperature.

So, what potentially awaits the team in next week’s episode? Before the dreaded phrase “To Be Continued” appears on the screen, Collins tells us, in two very unnerving words: “Mass extinction.”

OK, your turn, Scorpion fans! What did you think of Monday’s Season 4 premiere? Grade it in our poll below, then hit the comments to expand on your choice.