Like so many finales before it, Sunday’s series-ending episode of Teen Wolf left us with more questions than answers. 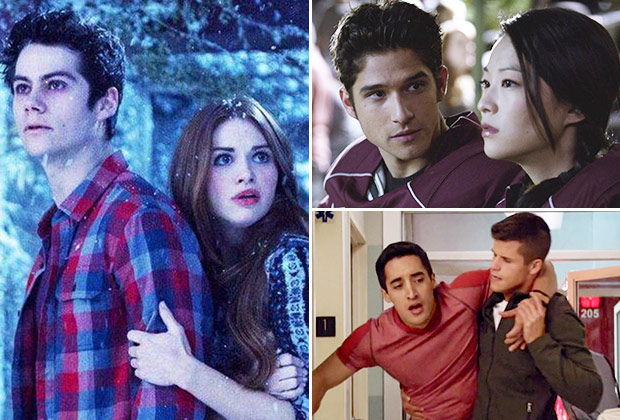 But while showrunner Jeff Davis intentionally wrapped the series finale on an open-ended note, I was in the mood for a little closure. So I got him on the line to answer some of my lingering inquiries from the MTV drama’s final hour:

TVLINE | First things first: I can’t believe you let Monroe live!
I liked the idea of a constant threat being out there. I liked the flash-forward where you see she’s really taken up the mantle worldwide. It was a way of broadening the scope of the story.

TVLINE | I have to admit, I expected Coach to be like, “I’ve known all along.” Were you tempted to do that?
No, not at all. I think Coach accepts certain strangeness in the world and deals with it one thing at a time. He doesn’t like to get too involved. He doesn’t want to know. I mean, there’s a question as to whether Greenberg is a figure of his imagination.

TVLINE | There were so many relationships to honor, Stiles and Lydia being one of them. Was it difficult writing those scenes? Expectations were high.
There are definitely certain things the fans want to see, so it was very difficult, yes.

TVLINE | I loved all of the Stiles-Derek scenes.
Those were fun to write. It was fun to get back to their chemistry, their love-hate relationship.

TVLINE | Now that’s been a minute, what do you think about the “Sterek” phenomenon?
When I hear the word “Sterek,” I think of the most passionate part of Teen Wolf, and definitely the angriest — most of that anger being targeted towards me. All I can say is that I did the story I wanted to do, and I’m happy that “Sterek” exists in the universe so that people can go off and write their own stories.

TVLINE | I liked seeing all of the old enemies back for Scott’s fight with the Anuk-Ite. Were those just laying around?
As I was writing the episode, I was like, “We still have the Oni costume, right? And the Berserker?” The real villain of 6B is human fear, and the Anuk-Ite just brought that out. This was a way of bringing out all of Scott’s fears, his past enemies. What he’s basically saying to the Anuk-Ite is, “I’ve conquered all of these fears. You can’t beat me.” He has nothing left to fear, except losing his friends. It was a way to tip our hat to all of the villains we’ve created; I’m proud of the comic-book aesthetic we have here.

TVLINE | The Anuk-Ite also seemed to strike a nerve with Scott when it mentioned Allison. If she had lived, do you think she and Scott would have found their way back to each another?
I don’t know, that’s a good question. I can say that she was his first love. There was a time when all I could imagine was Scott and Allison together. There was also a time I couldn’t imagine the show going past 50 episodes. [Laughs] But if Allison and Scott hadn’t ended, we wouldn’t have had that really funny, romantic story with Kira, which I loved. I also really like the way Malia and Scott’s romance has developed, as well as the message it sends to the audience, which is that you do love more than once in your life. Your first love doesn’t have to be your only love.

TVLINE | Speaking of love, how exactly did Malia’s kiss heal Scott’s eyes?
Scott says, “I’m trying, I can’t focus.” Lydia knows that Scott needs to calm his heartbeat, let the adrenaline go and focus on healing. The moment she was able to calm someone was with a kiss; she’s remembering the kiss that stopped Stiles’ panic attack the first time they kissed. That’s all Malia’s doing, helping him focus.

TVLINE | OK, so it wasn’t like a Snow White situation.
[Laughs] No, it wasn’t a magic kiss. It was just Malia helping him focus.

TVLINE | We never got to find out how Stiles felt about Scott dating Malia.
In our world, I believe that the characters are happy when their friends and family find love. F–k the bro code. Stiles was with Lydia, and Malia and Scott were both single. Wouldn’t you rather your best friend end up with someone you love?

TVLINE | If you say so.
To be honest, it comes from my experience as a gay man. Our community is so small, you can’t tell your exes that they can’t date your friends. Who the hell else are they going to date?

TVLINE | I noticed there wasn’t a “Where Are They Now?” element to the finale.
I hate that.

TVLINE | So help me fill in the blanks. Did these kids end up going to college?
Oh, yes, I’d imagine so. But I’m sure one or two of them had to put it off. Like, I imagine Scott doing night classes or online classes while trying to save the world at the same time. … Or they skip college, because college is overrated.

TVLINE | Another important question: Stiles’ dad and Lydia’s mom — still together?
[Laughs] I don’t know, maybe that will be answered someday.

TVLINE | And is Kira still off with the Skinwalkers?
No, I imagine Kira is off involved in some phenomenal adventure of her own, having mastered her skills.

TVLINE | Anyone else you wish you’d gotten back for the finale? Danny?
You know, there were so many characters we wanted to bring back. We had a whole list. Danny was on it, Braeden was on it. We couldn’t schedule Seth Gilliam for the finale; I had a whole plot line for him. The finale would have been an hour and a half long. We were running out of money and running out of time. I wanted Isaac to come back. Like I wanted him to show up with a two-second cameo at the end being like, “Did I miss it?”

Your thoughts on the Teen Wolf series finale, now that a few of your burning questions have (hopefully) been answered? Grade the episode below, then drop a comment with your full review.