Editor’s log: The following is both a recap of the Star Trek: Discovery series premiere (with spoilers) and a review of the series (based on the first three episodes). Seen the first episode? Permission to read on… granted.

Good things come to those who wait, Star Trek fans.

The first Trek TV series in a dozen years — Star Trek: Discovery — endured multiple delays, behind-the-scenes shuffles and a cloud of concern before finally debuting on CBS this Sunday. And as a lifelong Trek fan, I’m happy to report that the nail-bitingly tense premiere delivered a cracking good action story, eye-popping special effects and a number of gasp-worthy twists. (Not to mention a tantalizing cliffhanger expressly designed to send us scrambling to CBS All Access for the next episode. But we’ll get to that…) 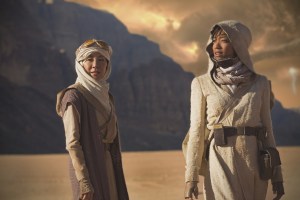 We open with the redesigned Klingons, clad in violently spiked attire and scarier and more, well, alien than previous Trek versions, as a leader named T’Kuvma declares his intention to reunite the species’ 24 houses. Meanwhile, on a desert planet, we meet Captain Georgiou and First Officer Michael Burnham of the USS Shenzou as they wander, seemingly lost. After Georgiou fires a weapon to open up a water well, a massive sandstorm rolls in, cutting off all communication… and threatening to trap them there for 89 years. Just in time, though, the Shenzou descends to pick them up, after Georgiou reveals she signaled them by walking in a path that’s the shape of a Starfleet insignia. That’ll work!

Let’s take a moment to talk about the look of Star Trek: Discovery. The sets and special effects are incredible — truly top-notch, on a Game of Thrones level. If part of the delay was making sure the space battles and Starfleet technology lived up to the hype, the result is a job very well done. (Although it is a bit strange, as with the Star Wars prequels, that a prequel like this has cooler-looking tech than the original series, which takes place a decade later.) 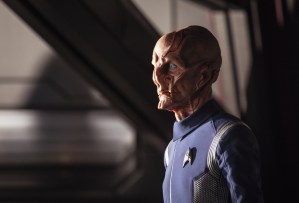 Burnham’s officer log puts us in the year 2256, as the Shenzou heads to the far reaches of Starfleet territory to investigate damage to a relay satellite. They come across an unidentified foreign object that’s scrambling the ship’s sensors, so Georgiou goes old-school and uses a telescope (!) to check it out. Chief science officer Lt. Saru (an analytical alien from a cowardly race called Kelpiens) thinks they should leave it alone, but Burnham volunteers to put on a space suit and take a closer look at it. The ensuing sequence of her heading into outer space and firing her suit’s thrusters to propel herself into the debris belt is simply awe-inspiring. (This is what we watch Trek for, people!)

Burnham finds the giant object, describing it as a centuries-old sculpture of some kind, but the ship can no longer hear her. And once she lands on the object… it begins moving. Then a terrifying-looking alien pops up, battle axe in hand, and takes a swing at her. Burnham fights back, tackling the alien and plunging his axe into his own chest. As the Shenzou struggles to contact her, we see Burnham floating helplessly through space, unconscious, her helmet cracked. The alien that Burnham killed was a Klingon. In a new war, Starfleet has drawn first blood.

After a flashback to Burnham as a child in school, where she was mentored by Sarek (Spock’s dad!), she wakes up in sick bay, scars all over her body. She rushes out, even though the doctor warns her about “genetic unspooling.” (That doesn’t sound good, does it?) She bursts onto the bridge and tells Georgiou about her close encounter with the Klingon, but the captain counters that Klingons haven’t been seen in 100 years. They think Burnham might have a concussion, but Georgiou decides to believe her, ordering a red alert. Burnham tells them to lock their phasers on the foreign object, and when they do, a Klingon ship suddenly uncloaks and appears before them. And it’s a lot bigger than the Shenzou. 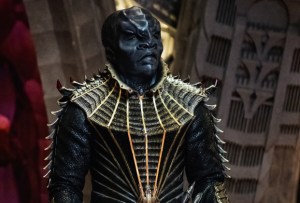 Back aboard the Klingon ship, a white-skinned Klingon named Voq volunteers to “light the beacon,” holding his fist over an open flame to prove his worth. In Klingon culture, white skin is considered “nature’s mistake,” but T’Kuvma has faith in Voq and sends him out to light the beacon. (While we’re here: How do we all feel about Discovery‘s attempt to flesh out the Klingons? There’s some interestingly messy stuff about race and culture happening here, and I’m not sure it’s all handled perfectly yet, but the bold new take on Klingons is at least intriguing, with a lot of storytelling potential, to be sure.)

Burnham, her scars now treated/healed, interrupts Georgiou’s holo-consultation with Admiral Anderson to warn that Klingons only understand things in terms of battle. Saru still thinks they should withdraw; Kelpiens are accustomed to being prey and can sense when death is imminent. (“I sense it coming now,” he says, forebodingly.) Then a blinding light floods the bridge. It’s the Klingon beacon, followed by piercing sound waves. Burnham retreats to her quarters and contacts Sarek, admitting to killing a Klingon and asking for his counsel. He brings up the fact that Burnham’s parents were killed by Klingons. (Hmmm… you don’t say?) She knows that the Vulcans achieved peace with the Klingons, and she wants to know how. Suddenly, she’s on the bridge, telling Georgiou to fire every weapon they’ve got at the Klingon ship. 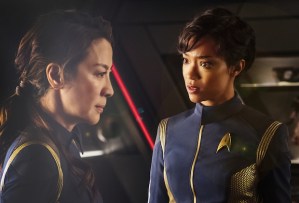 The Vulcans learned to always fire first when dealing with Klingons, she explains: “Violence brought respect. Respect brought peace.” It’s called “the Vulcan hello,” she adds. But when the captain declines to fire first, Burnham boldly challenges her: “You have to!” Georgiou pulls the First Officer aside, scolding her for her insubordination, blaming her passion on her past with the Klingons and ordering her to stand down. Burnham seems to agree… but then she gives Georgiou a Vulcan neck pinch, knocking her out! Whaaa…?

Burnham charges onto the bridge, relieving Saru of command and ordering the ship’s photon torpedoes to be targeted and ready. Saru senses this isn’t what the captain wants, declaring, “This is mutiny!” But Burnham says “fire” anyway… just as a dazed Georgiou bursts onto the bridge, saying, “Belay that order!” The captain pulls out a phaser (!) and points it at Burnham, ordering her to stand down. And just then, an entire fleet of Klingon ships arrive as backup. How’s that for a cliffhanger?

Of course, this ending is a transparent attempt to get you to fork over $5.99 per month to see how this story plays out. (Episode 2 is available right now only on CBS All Access, as the rest of Season 1 will be.) But if it’s a trick, it’s a damn effective one. I like the serialized approach they’re taking with Discovery, with ongoing arcs and episode-ending cliffhangers that make it an ideal binge-watch.

STAR TREK, BEYOND THE PREMIERE (NO SPOILERS)
Episode 2 is a straight-on continuation of the premiere’s storylines — playing out the shocking Burnham/Georgiou showdown, diving even deeper into Klingon culture/military strategy, tripling down on the whiz-bang effects and teeing up an even bigger cliffhanger than the first, one that steers the narrative in a new direction, starting with Episode 3.

If the first two episodes seem like rather serious stuff even for a modern-day Star Trek series, rest assured that Episode 3 — which is titled “Context Is for Kings” and introduces Jason Isaacs’ Captain Lorca, Anthony Rapp’s Lt. Stamets and Rekha Sharma’s Commander Landry — somewhat remarkably, given the circumstances, introduces lighter, tension-breaking scenes (usually featuring scene stealer Mary Wiseman’s Cadet Tilly)… the occasional belly laugh… a Tribble… instances of Alien-like horror… and more than a bit of mystery. (That latter element, of intrigue, sets the stage for a reveal that recontextualizes some of what we’ve come to suspect as well as suggests a curious new frontier for Discovery to explore.)

All told, Discovery still has some storytelling kinks to work out with the Klingons, and all the breathless action in the first two episodes didn’t leave a ton of room for character development beyond Burnham. But the seeds for a compelling series are definitely there — and, best of all, it feels like Star Trek. That trademark blend of sci-fi action, starry-eyed optimism and high-minded philosophy? Discovery‘s got it. (Thank our lucky stars.)

THE TVLINE BOTTOM LINE: Breathe a sigh of relief, Star Trek fans: Discovery comes out of the gate at warp speed and oozes with storytelling potential.

But what did you think? First, vote in our polls below: Give the Discovery premiere a letter grade, and tell us if you plan to subscribe to CBS All Access to see the rest of Season 1. (New episodes will debut there each Sunday at 8:30/7:30c.) And finally, beam down to the comments to share your extended thoughts on the premiere.