Not since “Princess for a Day” Michelle got herself lost in Disney World has the future of the Tanner family been left so — for lack of a better term — up in the air.

But before we dive into the sheer Japandemonium of Fuller House‘s midseason finale, let’s go over some of the more ludicrous developments of Season 3:

D.J. and Steve continued their (often literal) song-and-dance routine, all the while assuring C.J. that there was nothing to worry about. Even when she walked in on D.J. literally wearing her wedding dress. (For the record, I don’t think I’ll ever be able to think about Grease without imagining Steve and D.J. as Danny and Sandy… nor will I be able to think about Ricky Martin without imagining Jimmy in that dress. Yowza.)

Meanwhile, Becky surprised Stephanie with an appointment for a pelvic ultrasound, where she learned that she still has a few viable eggs, making it possible for her to have a child of her own via surrogate. But rather than freezing her eggs for later — you know, like when she actually has some money, maybe even an apartment of her own? — she was told to find a sperm donor immediately. (And she doesn’t even have to worry about paying for in vitro, because everyone is chipping in!)

This brings us to the finale, which began with everyone packing for their trip to Japan for Steve’s wedding. Look, I’m no mathemagician, but wouldn’t flights to Japan and five-day hotel stays for all those people be insanely expensive, especially for a group of people who just pledged to pay for in vitro fertilization? But I digress… 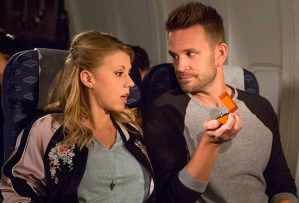 The real drama came upon boarding: After Jimmy stopped the plane to tell Stephanie that he wants to be her baby daddy — this poor girl is under so much pressure, by the way — D.J. accidentally told Steve that she doesn’t think she’ll be able to watch him walk down the aisle because he was her original first choice. (Oh, did I mention that Matt is planning to propose to D.J. in Japan?)

And a special shout-out to “It’s Me!” Grandpa Nick for being the spinoff’s deepest cut yet. It took me a good 15 seconds to remember who he was when he showed up to babysit Tommy:

Questions I’d like to see tackled in Season 3B:

* Did the Gibblers end up keeping that pony Kimmy bought for Ramona? If so, who’s watching it while they’re in Japan?

* Will Joey finally drop his kids off at a fire station? (That was a dark confession, by the way.)

* Who will be Stephanie’s surrogate: Kimmy? Gia? D.J.’s sassy assistant?

OK, you’ve got your talking points: Grade the first half of Fuller House‘s third season below — the second half is expected sometime in December — then drop a comment with your full review.