The Nathan James hasn’t necessarily been decommissioned just yet.

TNT tells TVLine that contrary to what The Last Ship cast member Travis Van Winkle, who plays Danny Green, announced (and later deleted) via Instagram earlier this week, the action-drama is not necessarily heading into dry dock after next summer’s Season 5. 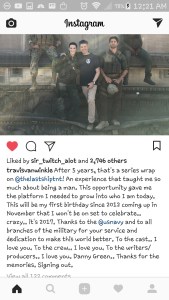 Sent in by TVLine reader Melissa

“We shot two seasons simultaneously; the fourth is currently on the air and the fifth will return next summer,” reads the network’s statement. “We greenlit the fifth with the idea that it could be the final season, however it’s far too early to make that determination.”

Over a year ago, and barely a month after The Last Ship was renewed for Season 4 (currently airing Sundays at 9/8c), TNT extended the series’ run through a fifth season, to air in Summer 2018. (Production on Season 5 was briefly shut down in April, as series lead Eric Dane took time off to battle depression, but filming of that 10-episode run wrapped earlier this week.)

Want scoop on The Last Ship, or for any other show? Email InsideLine@tvline.com and your question may be answered via Matt’s Inside Line.