You gotta say this about CBS’ Zoo: it sure as hell knows how to set up a new season.

As the Season 3 finale got underway, the heroes had a multi-pronged mission — to power down all of the beacons worldwide while keeping Clem and her baby safe, so that Abe could administer the series of specifically-timed shots to cultivate the cure to human sterility.

All while, you know, processing the fact that Jackson is dad to a young man and never forgetting that awful, awful Abigail is still out there somewhere (since Jackson’s aim at close range with a big gun is so lousy). 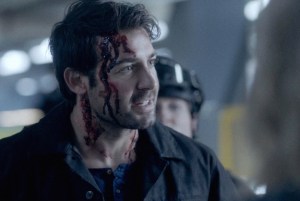 As for the first task, Mitch got the idea to divert the power from every other beacon to the one in St. Louis, the thinking being that they were best outfitted to withstand a hybrid stampede. Mitch then gleaned that beacon was emitting two sonic wavelengths, one of which, Jackson observed, matches the one he uses to control animals. The gents surmised that if Jackson is “in sync” with one of the sonic waves, he (and he alone) might be able to get close enough to it to attach an override device.

Sure enough, though it took much doing (and nearly cost both him and Tessa their lives in the process),  stalwart Jackson got the job done, allowing Mitch to power down that last beacon. The bazillion hybrids who had stormed and infiltrated the barrier in turn lost their fervor and became easy pickings for Abe, Dariela et al. 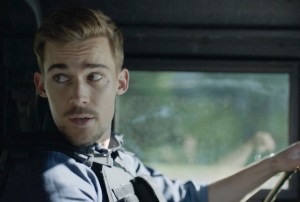 But while the hybrids were attacking, Mitch quietly arranged for Clementine and the still-unnamed baby to be whisked away from the barrier zone, by Logan. Alas, their truck got intercepted by winged hybrids who plucked out, chewed up and spat back onto the front hood a very dead Logan. And as Clem scrambled to protect the baby and maybe get the truck started back up, she got KO’d by — who else! — that awful, awful Abigail.

Back at the barrier, one of the soldiers was mourning a fallen K-9 colleague when the fatally bitten pooch suddenly sprang to life, as a feral hybrid, and mauled his handler. Hybrid bites are infectious for common animals?!?!? And that could be a thing if the hybrids managed to penetrate the barrier and roam the eastern half of the country. But surely that could never happen, right?

Wrong. Because Abigail phones her brother to say that the price for the baby’s return (and thus the reversal of human sterility) is the hybrids’ freedom. And without consulting anybody, Jackson taps away at the jet’s control tablet and sets it on course for the barrier. As Jackson does so, there is some fast and furious debate between him, Mitch, Jamie (who is teary over the Logan news), Abe, Dariela, Clem and Tessa, with much finger-pointing about who’s to blame for this new predicament. But with no less than human extinction being on the table, Jackson quotes back to Mitch, “One problem at a time…,” as the jumbo jet plows through the barrier, setting the stage for a hybrid-filled Season 4 — if the show gets renewed.

What did you think of Zoo‘s latest cliffhanger, and the hope for renewal? Even if it means more (ugh) Abigail?