With a Dark Knight rising, the birth of a fearsome foe and a cool twist on Penguin’s criminal empire, Fox’s Gotham appears to be bat on track after a patience-testing, Tetch-and-go season.

It is early, of course, but Season 4 portends to be a bit more focused, with the premiere zeroing in on Penguin’s new “license to (anything but) kill” initiative, which has taken a serious bite out of crime by regulating it — and thus earned the backroom endorsement of both the mayor and police chief. Gordon of course isn’t at first aware of, and even upon being schooled refuses to sign off on, this new status quo, thus continuing the theme of him forever irking his not-so-do-right colleagues.

Neither is every criminal on board with the licensing agreement. Take Merton, a small-time hood whose attempt to rob a bevy of wedding guests, sans the proper paperwork, is shut down by Zsasz (who proceeds to round up the loot on his own). Determined to remain rogue as well as make his mark, Merton gets the super-skittish Jonathan Crane (Wayward Pines‘ Charlie Tahan) sprung from Arkham, so that he can get his hands on the lad’s dad’s “fear juice” formula. 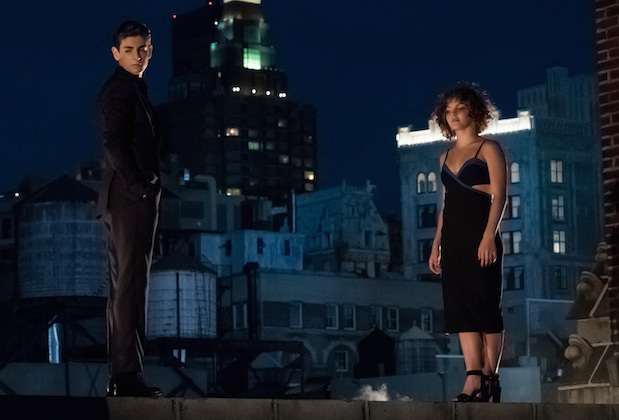 Doing so emboldens Merton’s gang so much that they aim to crash the opening night soiree for Penguin’s Iceberg Lounge (fka Sirens), only to get nabbed by Oswald as soon as they arrive. Party guest Bruce meanwhile follows Selina to the rooftop, where he a) visibly impresses her by casually joining her on the precarious ledge and 2) apologizes for dismissing her “kind gesture” of showing up when Alfred was hospitalized. Bruce appears to want to say more, but only gets out a compliment about Selina’s dress before Alfred fetches his ward to tend to a bit of business inside the club.

Downstairs, as Penguin prepares to publicly punish the rule-breaking Merton, Bruce is tempted to “suit up” (in a very beta version of his crimefighting garb) to intervene, but Alfred advises that “there is a time for masks, and a time for Bruce Wayne,” and this is the latter. Taking that cue, the rich kid counsels Penguin to turn Merton & Co. over to the GCPD, but his argument is interrupted by an impatient Ivy switching off the lights and sparking a bit of mayhem — during which Merton and the “fear juice” causes Penguin to imagine a thawed-out Nygma cackling in his face. But with help from an arriving Gordon and Bullock, as well as Alfred, order is restored in the nightclub.

Afterward, Bruce dons his mask and cloak to confront the number-cruncher who manages Penguin’s roster of license criminals and walk off with the naughty list. But when Bruce goes to survey some scalawags, he tumbles through the skylight most inelegantly and is about to be descended on by cops just as the scene ends.

In the premiere’s final moments, Merton’s No. 2, Grady, goes to check on Crane, whom they had locked up in a closet with some fear juice and an actual scarecrow. Now clad in the strawman’s rags, Crane turns around to announce that he “isn’t here anymore” — it’s just the Scarecrow now! — as he proceeds to douse the hoodlum in fear juice.

What is your knee-jerk take on Gotham‘s new season, now on a new night?