What fresh hells does Michael have cooked up for Eleanor and company in Season 2 of The Good Place? Well, his evil plan (version 2.0) starts out with pairing each of them up with about the worst person possible. 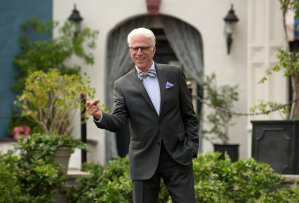 Wednesday’s one-hour premiere kicks off with Michael trying to convince his boss Shawn that Take 2 on his “faux Good Place” idea will work out better than last season, with an all-new set of subtle tortures: “For example: All the coffee is from those little pods? Diabolical.” But Shawn still thinks the idea is dumb, and the other residents (all demons, too) aren’t sure about it, either. (The woman we knew as “Real Eleanor” is now named Denise, and isn’t sold on her new character.) But Michael presses on, ordering the residents to get Eleanor drunk at the welcome party so she’ll spill details they can use against her.

A memory-wiped Eleanor’s new soulmate is a chiseled, empty-headed hunk who’s running off to the gym every second… but she does have that “Find Chidi” note she left herself in Janet’s mouth. She doesn’t know who or what a Chidi is, though. (Is it a soup, she wonders?) She tries to ask other residents, but they’re no help — except for Jason, who silently gives her a Buddhist token of some kind. Michael decides to turn up the heat on her by enlisting her to give a brief (one-hour) speech at the welcome party, giving her a tiara and “Best Person” sash to wear. At the party, Eleanor is freaking out and about to suck back a row of tequila shots to steady her nerves when she hears the name “Chidi.” She runs over to him, exclaiming, “I knew you weren’t a soup!” 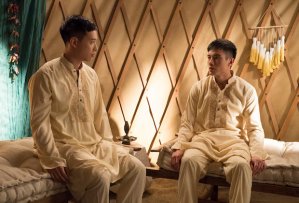 Her three pals aren’t faring much better in Michael’s cheery new hellscape: The eternally indecisive Chidi is forced to choose his new soulmate, and just when he finds a like-minded soul in dorky philosophy nut Angelique, Michael cruelly swoops in to pair him up with a cold fish named Pavita instead. Tahani’s new soulmate is a humble, height-challenged doctor named Tomás, who encourages her to dress down in baggy cargo pants for the welcome party. (She whines that she’s “not used to dressing like a plumberess!”) And Jason’s soulmate is a male Buddhist monk named Luang, who’s like an identical clone of him, silently arranging stones and riding bikes right beside him at all times. (“You’ll always be right next to each other, for eternity!” Michael crows.)

So no one’s particularly in a mood to celebrate at the welcome party, which we see a few times, from each character’s perspective. Chidi pulls Angelique aside and confesses his feelings, but she pushes him away; she does say “Chidi” out loud, though, which is what Eleanor hears. She shows him the “Find Chidi” note and tells him she knows something’s off around here, but he thinks she’s nuts — which, fair enough — and blows her off. Tahani ends up downing Eleanor’s row of tequila shots and interrupting her speech, drunkenly complimenting everyone else’s “regular-sized pockets and regular-sized soulmates” before tumbling into a tower of shrimp and setting the curtains on fire. The chaos that ensues allows Jason to finally escape Luang.

A fun little wrinkle throughout the premiere: Real Eleanor… er, Denise, that is, complaining about her tiny new role like a vain actress stuck in the back row of the chorus. (“I’m a Ferrari, OK?” she informs Michael. “And you don’t keep a Ferrari in the garage.”) We spot her unhappily serving Chidi and Angelique slices of Hawaiian pizza (ew) during their meet-and-greet, and later at the welcome party, she invents a wild backstory for herself involving a limp and a past as a trapeze artist. This is all to say: More Denise, please! (Maybe she’ll end up being the stubborn loose thread that ultimately unravels Michael’s evil scheme?) 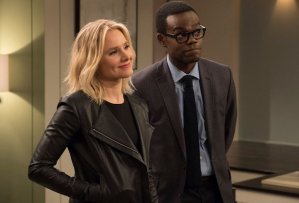 Chidi tells Eleanor he recognizes the title of the book she wrote the note on: What We Owe to Each Other, a philosophy text he used to teach. “I think, somehow, that we know each other,” he admits. (Aw, soulmates!) And Jason calls on Janet and confesses that he’s not a silent monk after all. She gives him a place to hide, and he hugs her, which confuses her digital brain… but she hugs him back anyway. (Aw, more soulmates!) Meanwhile, Michael’s furious: Eleanor was supposed to give the terrible speech, not Tahani. Eleanor’s hunky soulmate just wants to get back to his old job torturing people in the twisting department: “This job is weird! All talk, no twisting!” And amid all the arguing, they realize that the core four victims have all gone AWOL.

Michael tracks down Eleanor and Chidi at her house and does his best to split them up. Jason shows up, and when Michael tries to send him home with Luang, he explodes: “Homey, no!” All of their new soulmates show up parroting the same canned line about being “worried sick,” and Eleanor knows something’s up: She’s figured out (again) that this isn’t the Good Place. Michael uncorks that evil laugh of his, calling Eleanor a “sneaky little so-and-so” and making sure she can’t leave herself another note by reaching elbow-deep into Janet’s mouth. “Third time’s the charm,” he says, snapping his fingers and restarting the experiment again. He assures the other residents he’s worked out all the kinks… but the almighty Shawn still thinks this is the second go-around, and reminds Michael there will be no Attempt Number Three. Well, as long as Shawn doesn’t find out, anyway.

* The Good Place resident who kept asking Michael if it was OK to bite people.

* Michael referring to old-fashioned torture tactics like “the penis-flattener.” (Ouch.)

* Tahani reacting to her ascension to the Good Place with fake modesty: “What a surprise!”

* Jason using his Zen garden stones to spell out the word “BOOBS.”

* That Buddhist token Jason gave Eleanor? It was just a gear to Luang’s bike wheel that Jason sabotaged to get away from him.

What’d you think of the Good Place Season 2 premiere? Give it a grade in our poll below, then hit the comments with your thoughts.