The fourth season finale of Being Mary Jane buried its titular news anchor under increasingly mounting pressure, as Justin and Kara’s ongoing Game of Thrones — or at least Game of Offices — came down to her tie-breaking vote. Would she choose Justin, the man who (at this point) can give her everything she’s always wanted? Or would she choose Kara, her “ride or die” since Day 1?

Frankly, it was too difficult a decision for Mary Jane to make with a clear head, so she smoked (herself) for inspiration: 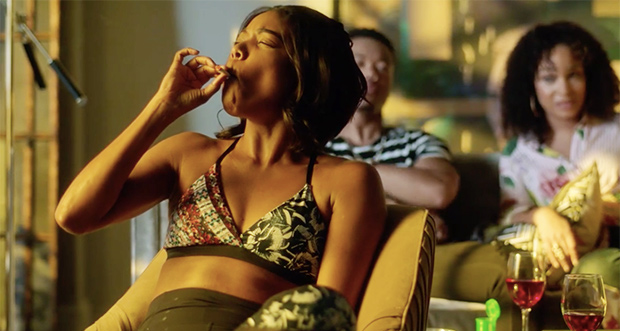 Though we didn’t get to hear MJ cast her vote, the position ultimately went to Kara. And given Justin’s understandably hurt reaction to the loss, it was reasonable for MJ to assume that their relationship was (at the very least) on the rocks.

But that’s where she made her big mistake. Rather than waiting for a status update from Justin, she went ahead and had her frozen embryos implanted. So while I was thrilled that Justin surprised her with a proposal at the end of the episode, I can’t imagine he’ll be thrilled to find out his fiancée is potentially pregnant with another man’s child.

* Speaking of proposals, Kara was convinced that Orlando was going to pop the question at his private retirement party, but her suspicions were discredited when he surprised her with… a new nameplate for her desk.

* And back in Atlanta, “thirsty bitches” came from near and far to woo Paul with all manner of home-cooked meals. His disinterest in the endless parade of desperate church ladies gave Helen hope in their future together, but the divorce papers he gave her took care of that hope real quick. (He didn’t even try the red velvet cake!)