Feeling emotional about the imminent end of So You Think You Can Dance‘s 14th season? Well, Monday’s penultimate episode made it clear that you are not alone.

Only seven days remain until the Fox competition series crowns its newest champion, and at least one All-Star was feeling very sentimental during the performance finale. Just after she reprised her Top 9 contemporary routine with Kiki, Jenna Johnson burst into tears, revealing to Cat Deeley between sobs, “I’m just so sad… because I love dancing with him!”

Suffice to say, Monday’s broadcast was packed with similar nostalgia, as the Top 4 and their All-Stars reminisced on the season, performed their favorite routines from the summer for a second time and gushed about each other in endless teary-eyed interviews. (The moment that got me all misty? When Vanessa Hudgens told Lex that he must have a guardian angel who had given him wings, and he immediately pointed to the audience, presumably to a family member. Get me some Kleenex, stat.)

The four finalists also performed new duets with one another, which viewers will vote on to determine the Season 14 winner. Let’s break those routines down:

* Lex and Taylor (Contemporary) — This was actually the last performance of the night, but I have to talk about it first for two reasons. Not only did it mark the return of Mia freakin’ Michaels (who, of course, was responsible for routines like this before stepping away from Dance), but it also delivered the enormous reveal that Taylor and Lex are in love! Like, in real life! Am I the only one who didn’t pick up on their relationship at all during these past few weeks? Because I feel a little silly for not realizing they had a thing.

Fortunately, Lex and Taylor’s IRL romance allowed them to deliver a truly gorgeous routine. They seemed to feel so safe in one another’s arms, so happy to finally reveal their relationship to the audience and so comfortable being vulnerable in the way that Mia’s choreography required. Plus, those kisses that went on forever, even while they spun around on the stage? That’s some chemistry you just can’t force. 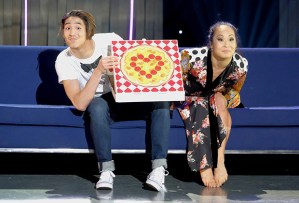 * Koine and Lex (Broadway) — The next time you’re feeling sullen and find yourself binging funny YouTube videos to cheer you up, this delightful Broadway number should top your list of uplifting watches. From the moment Lex dropped that pizza box, he and Koine totally sold their characters’ adorable infatuation — and they nailed the comedy, to boot. Their ability to tell a complete love story, make us laugh and dance in dazzling unison was an utter joy to watch. (Full disclosure: I would be thrilled to see either of these two win next Monday.)

* Kiki and Taylor (Cha-Cha) — If Taylor had been paired with anyone else for this cha-cha, she would have come out of it looking like a ballroom pro. Unfortunately, she was partnered up with Kiki — and this style is, y’know, kind of his thing. Though Taylor was by no means unwatchable, she didn’t quite have that necessary swivel in her hips, even when the dance was at its sexiest. Plus, even though Taylor’s height is a benefit in most other styles, it prevented her from pulling off seamless lifts with Kiki; instead, they looked clumsy.

* Kiki and Lex (Hip-Hop) — Oh, Kiki, you’ve really come a long way from The Academy. Though Lex still had a bit more swagger than his partner during this Luther Brown hip-hop, Kiki has no doubt made incredible strides in the style. He and Lex made themselves at home in the pocket of this routine, and they forged a wonderful buddy-cop dynamic that made the whole piece feel like a fun sitcom. 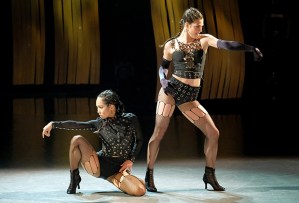 * Koine and Taylor (Jazz) — Performances like this one are the precise reason why SYTYCD needs more same-sex partnerships, and not just during the finale. Koine and Taylor’s jazz was the rare Dance routine that isn’t about romance or a failed relationship or two people who have drifted apart throughout the years. It was just two women, looking utterly badass, hitting every beat with as much sass as possible. The ladies seemed to adore sharing the stage, and it was especially hard to take my eyes off Koine, who strutted through the choreography with infectious confidence.

* Koine and Kiki (Contemporary) — And in case you wanted to feel like you’d been punched in the gut, Travis Wall stopped by Monday’s performance finale to fulfill that wish. Truth be told, I didn’t think Koine and Kiki had quite the same chemistry with each other that they do with their All-Stars — and yet, this contemporary, centered around a romance that has disintegrated over time, was still so, so compelling. Even if I didn’t fully believe that Koine and Kiki were once in love, their lines and lifts were just breathtaking.

As for those reprises: Kiki and Jenna chose the aforementioned Mandy Moore contemporary from Week 3; Koine and Marko dusted off their Week 2 African jazz (with some synchronization issues, unfortunately); Taylor and Robert, of course, gave an encore of their Week 1 Travis Wall contemporary; and Lex and Gaby also returned to Week 1 with a second helping of their tap routine.

OK, your turn! Who do you think will win Season 14 — and who should win? Cast your vote in our polls below, then hit the comments with all of your thoughts on Monday’s performance finale!