Sunday’s (second) episode of Teen Wolf brought back a familiar face, gave us the family reunion we never wanted, and served up an unexpected death with an even more surprising emotional punch.

Let’s start with the familiar face: The series’ penultimate episode — yes, as in the second-to-last episode ever — picked up in Brazil, where Argent was shilling out good money to track down a certain bushy-browed legend by the name of Derek Hale. The former Alpha proved easy enough to locate, but he wasn’t exactly eager to return to Beacon Hills.

This brings us to that unwanted family reunion I mentioned earlier: Derek and Argent’s bro-down was cut short by a swarm of federal agents, most of whom were quickly shot from behind, with only one left standing. And who was holding the smoking gun? None other than Kate “the werejaguar” Argent. Both guys managed to escape with their lives, but she did make off with Derek’s special bottle of wolfsbane. And that’s… not great. 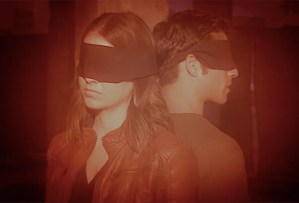 Now for the episode’s surprisingly upsetting death: After training Scott and Malia in the delicate art of fighting blind, Deucalion was struck down by one of Monroe’s minions — and I couldn’t believe how much I cared. Don’t get me wrong, he was the best possible target (over Scott, Malia, Lydia, etc.), but it’s a shame that helping Scott’s pack inadvertently cost him a happy ending. (Like, he just redeemed himself!)

Meanwhile, Nolan proved to be a rebellious little rascal, leading Liam to a secret room in Beacon Hills Memorial where Monroe was hiding a pair of unidentified patients, both under a steady wolfsbane drip. Unfortunately, Monroe was counting on Nolan spilling the beans, so Gabe (and his fists of fury) were waiting for Nolan at the hospital for the beating of a lifetime. Much like Deucalion, I found myself surprisingly sympathetic to Nolan’s latest plight. (What is wrong with me?!)

* Season 6B has always had a vague Trump-era, us-vs.-them feel to it, but I feel like that point was really hammered home tonight with Deucalion’s question about Monroe’s army’s motives: “What if it’s not just the Anuk-Ite? What if this is what people are really like? Could it be that all this creature really does is give people permission to act on whatever awful truth lies within them?”

Your thoughts on Teen Wolf‘s penultimate episode? Hopes (and fears) for next week’s series finale? Drop ’em all in a comment below.