Big Little Lies won big (not little) at this year’s Emmys — and even director Jean-Marc Vallée is now ready to book a return trip to Monterey.

The acclaimed HBO series was only intended to air for a single season — hence, its inclusion in the Emmys’ Limited Series category — but a Season 2 has been quietly in the works, with HBO programming president Casey Bloys admitting in July that he’s asked the book’s author Liane Moriarty to “take a crack at” a new season of stories. Vallée, though, had previously been a holdout, flatly stating that “there’s no reason to make a Season 2″… but now even he’s come around to the idea.

“I’m just like the audience and like these girls and everyone else… It’d be great to reunite the team and to do it,” Vallée said backstage at the Emmys after BLL took home eight wins, including Outstanding Limited Series, along with trophies for Vallée and stars Nicole Kidman, Alexander Skarsgard and Laura Dern. “Are we going to be able to do it, altogether? I wish,” he added. “We’ll see.” 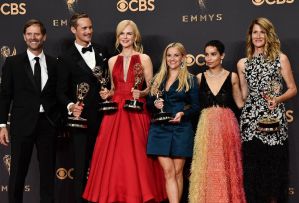 It’s admittedly difficult to juggle the schedules of A-list stars like Kidman and Reese Witherspoon, but Witherspoon (who took home an Emmy tonight for her role as executive producer) confirmed to reporters when asked about a possible Season 2: “We’re thinking about it, we’re talking about it, we’re discussing it. But nothing definitive yet.”

She’s right about that: HBO hasn’t officially given the greenlight to a Big Little Lies Season 2 yet… but eight Emmy wins should go a long way towards convincing them.

Do you want to see a Season 2 of BLL, or was that ending perfect enough as is? Let us know in the comments.