Were you surprised to hear Pamela Adlon’s name among this year’s Emmy nominees? So was she. In fact, she wasn’t even paying attention.

“I was not aware that they were announcing it or anything,” Adlon admits to TVLine as she prepares to unveil Season 2 of her bittersweet FX comedy Better Things, premiering this Thursday at 10/9c. But maybe she should’ve been more prepared: After all, Adlon is fantastic as sarcastic single mom Sam, raising her three daughters in L.A. with zero bulls—t while balancing a career as a working actress. Plus, Adlon co-created the show, along with her Louie co-star Louis C.K., and also writes and directs a huge chunk of the episodes herself. (She’s directing all ten episodes of Season 2.)

Below, we chat with Adlon about her emotional reaction to the Emmy nomination (“I cried for almost an hour straight”), how she achieves the show’s off-the-cuff feel, her “amazingly fruitful creative partnership” with Louis C.K. and what’s coming up in Season 2. (Fans of Celia Imrie as Sam’s kooky British mom Phil: Get excited.) 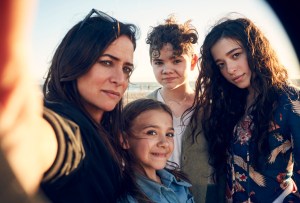 TVLINE | Congratulations on your Emmy nomination. Were you expecting that at all?
Not on my radar at all. I was not aware that they were announcing it or anything. So my manager called me and told me, and I didn’t understand what he was saying, and I cried for almost an hour straight. It sounds like a cliché that it’s an honor just to be nominated, but it’s one hundred percent true. Because if you look at my bizarre career, and I’m still here and I’m thriving, and it took me fifty years to get here, and to be recognized as an actor… it’s just a kind of phenomenal, rare-air moment. And so many people that I know, my friends and my peers, they said, “I screamed. I jumped out of my chair.” I feel like it’s like a triumph for everybody. Because we’re all doing the same thing for so long, and then to be able to have that achievement… and the icing on the cake is, people are going to watch my show that maybe wouldn’t necessarily have had it on their radar. It’s just the biggest gift in the world. So I don’t care about anything else. I want to be like Joan Crawford and not go, and pretend I have a cold and stay home.

TVLINE | You said that it took you a while in Season 1 to find the show’s voice. You had to make the show to find out what it was. So now that you know the show’s voice, how does that change what we see in Season 2?
It just feels richer and deeper, because I could explore these characters. Like Jeff, [played by] Greg Cromer. We explore Jeff because I was inspired by Greg Cromer as an actor. He made me laugh. And so there’s a lot of momentum behind this season, in how [Sam is] kind of digging in and engaging with her life, and retreating from other things. It’s just situations that are happening to people of my generation, with their parents and with their kids, and telling those kind of stories.

TVLINE | Yeah, normally I would ask you what’s coming up in Season 2, plot-wise, but this doesn’t feel like that kind of show. Each episode is just like a self-contained slice of life.
That’s right. Kind of the way my show was crafted was situations. Like, I put myself in the plastic surgeon’s office with Sunny, and then I’ll say, “Let’s go the playground with Duke,” and kind of weave the stories together like that. This season, things are a bit more linear. We get to explore [Sam’s mom] Phil, and go down this road of where she is in her head: this weird thing that she did, and then this other weird thing. It’s human, you know? And that’s what I like about it. I like exploring those kinds of feelings, and looking at people and noticing them and saying, “What’s going on in there?” 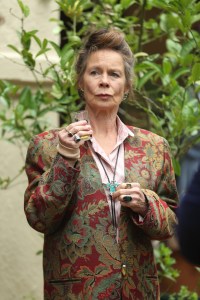 TVLINE | I love Celia Imrie as Phil, and it’s really cool to see Sam not only as a mom, but as a daughter, and how she plays both roles.
Yeah, I’m aware of it all the time, because my mother lives next door to me and my daughters. So I constantly see me getting frustrated with my mother, and then my daughters are like, “Mom! You were just so mean to Nana!” Oh my God, I see it everyday. I live it. So it’s just something that’s part of my life that I think is funny and interesting, and I’m counting on [the fact that] other people will agree.

TVLINE | How much of Better Things corresponds to your real life? 80 or 90 percent, with a little bit fictionalized?
Oh, it’s less this season. Because in Season 1, when Phil says, “Three people told me they loved my skirt today”? My mother says that s–t all the time. Just non-sequiturs. It makes me laugh, so it became a detail of my show. But this season, it’s less so, because I’m exploring characters that I wanted to find out more about. So Louis and I were coming up with scenarios for them this season that are less like my own situation.

TVLINE | Louis C.K. has been very involved with the show. How does your working relationship with him actually work, day-to-day?
We talk about everything, on the whole. We were writing my first season when he started coming up with Horace and Pete, because he’s kind of ADD and he starts getting all these ideas and going off the rails. So we say, “Let’s have a Skype session on this day,” and if we write something, then each of us prints it out, and we read it. It’s great when we can be in the same city together, which doesn’t happen very often. We get very inspired when we’re around each other, and we’re able to take [index] cards and put them up on the board and things like that. It’s an amazingly fruitful creative partnership. It feels like composers who are always partners. It’s just an amazing thing, because we share the same kind of brain. 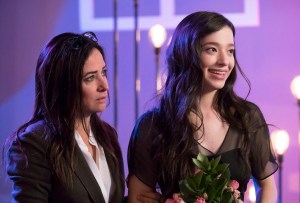 TVLINE | In the season premiere, Sam’s oldest daughter Max is dating a much older guy, and we’ve seen that before on sitcoms, so we think we know where it’s going. But on your show, I feel like you always veer the other way. Is that something you’re going for: to take conventions like that and flip them on their head?
Yes. I like the left turns. When I was pitching my show to [FX president] John Landgraf, he had said that: “Keep going. Make a left turn.” I like that. I like to bury the lede. I don’t like to let people know where I’m going to end up, and I don’t personally like to know where I’m going. I don’t like to watch a movie or a show with anybody, because I don’t want people to throw out guesses! [Laughs] I was watching the Game of Thrones premiere with my friend and her husband, and he said, “That’s Arya Stark!” And I was like, “Godammit, Bill!” [Laughs]

TVLINE | Your show feels very off-the-cuff and improvised, but yet you have these directorial flourishes, too — these long takes that can’t just be improvised. How do you do that and still make it feel natural?
Well, everything is scripted. Nothing is improvised, except maybe a little banter if we’re at a party. That’s the way it was on Louie, too: Everything was very scripted. Making it feel natural is just shooting it in an organic way. My number one thing is, when we’re shooting at the house, every corner is alive. I don’t have equipment everywhere. In the first season, I banned any of the crew from being in the girls’ rooms. I said, “These are little girls’ rooms. It’s not appropriate. You keep their rooms sacred.” My room at the house, I nap in it every lunch. When we’re shooting the [long takes], I’m hosing everything down with the camera. I want to see all of it. That’s the advantage to shooting at a practical house, and not a set. It’s just the way life is, and that feels exciting and electric to me.