Better Things celebrates the beginning of its second season by inviting us to a party only Sam could throw: There’s food, live-music, recently divorced couples, little kids playing an absurdly mature game of Truth or Dare and, of course, Max’s new 35-year-old boyfriend.

To accept the invitation, please read on for a recap of “September.”

A MAN FOR MAX | Each member of the Fox family has grown up a fair amount since Season 1, but no one more than 16-year-old Max. Since we last saw her, Max has started dating a much older man named Arturo. How did they meet, you ask? In one of the funniest scenes in the show’s admittedly brief history, we discover Arturo accompanied Sam’s friend Macy to Max’s high school play. Once Arturo found out that Max directed the production he immediately fell, clutching his heart, face-first onto the stage.

While his dramatic performance may have won Max over, Sam is obviously not happy about the situation. However, she admits there’s really nothing she can do to stop her (much to Stacy’s chagrin). The way Sam sees it, if she wants to be a part of Max’s life, she has to learn to accept Arturo — until an opportunity presents itself in the form of Arturo’s brother Pedro.

Pedro has been giving Sam some fairly creepy looks throughout the party. Sam, never one to let a strange guy get in the way of a potential parenting opportunity, rather obviously flirts with him while in Max’s eyeline. Her gamble pays off, as the strangeness of seeing her Mom with her boyfriend’s younger brother delivers the final blow to a relationship that Max was already beginning to question.

Max interrupts Sam and Pedro’s flirtatious back-and-forth, pulls her mom aside and opens up to her about her unhappiness with Arturo. Mikey Madison shines during Max’s heartfelt confession, showing a depth and maturity to both her character and her performance that wasn’t there in Season 1. She tells Sam that at the beginning “it was such a thrill to be with an older guy,” but that she feels that she lost control somewhere along the way and she needs her mom’s help to get it back.

Sam tells Max to go to her room and transforms from comforting to badass Mom in the blink of an eye. She kicks Arturo and Pedro out of the party, and threatens to call the police if they come anywhere near Max again. Sam might not be the perfect mother, but she consistently fights for her kids with everything she has.

DARING DUKE | While all of that is going on downstairs, Duke and her friends play an uncomfortably mature game of Truth or Dare a floor above. Duke, who just last season said her first swear word, has also grown up quite a bit. She eggs on her friends to do various dares, such as putting Monopoly game pieces in their vaginas — a statement she seemed far more comfortable saying out loud than I did writing it out just now. Anyway, the game culminates, as most party games tend to, with an unlucky girl yelling “Penis!” at the top of her lungs in front of everyone at the party. Duke’s antics go without real consequences this time around, but I’d be shocked if her maturity isn’t a recurring theme throughout the season. 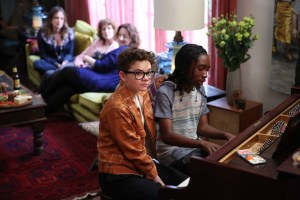 FRANKIE’S GOT TALENT | Quick note: You’ll recall that Frankie had an emotional end to Season 1, when the show strongly implied, though never came right out and said, that the character might be transgender. The topic isn’t directly addressed in the season premiere, so until it is, I’m going to keep using “she/her” in relation to Frankie. If or when the show makes a clearer call, I’ll adjust the recap language accordingly.

What is clear though is that Frankie looks far more comfortable and happy this year. She looks more at home in her skin than she did at any point last season, absolutely rocking that Hawaiian shirt and playing off an insult from Phyllis with a smile. Frankie even puts a showstopping musical performance with her new friend Jason. Not only that, but the pair offers to help Sam clean up once the party ends. — Jasper Pike

What did you think of the premiere? Grade the episode via the poll below, then hit the comments!