The luck of the Irish was not with Liza in Younger‘s fourth season finale.

Wednesday’s episode sent Liza and Maggie to Ireland — per Josh’s request, because who wouldn’t invite the person you almost proposed to months ago to your wedding? — only to discover that Claire was looking at the nuptials as more of a green card opportunity than anything else. Claire also knows Liza’s secret (thanks, Josh!), which she used as leverage for Liza to help convince the feds that the marriage was legitimate.

And nothing was going to stop Josh and Claire from swapping vows in a traditional Irish ceremony — not even Josh drunkenly stumbling into Liza’s room the night before the wedding and kissing her!

Below, actress Miriam Shor (aka Diana Trout) breaks down some of the finale’s most memorable moments, including the trouble Zane caused for #TeamEmpirical, while reflecting on her character’s journey throughout Season 4:

TVLINE | First of all, how mad are you that Diana didn’t get to go to Ireland?
Don’t even bring that up. Peter Hermann and I were like, “We’re good [with not going]. We’re fine.” Then we had a panel at the 92nd Street Y a couple of days ago, and people kept bringing up Ireland, and Peter and I were like, “What the f–k, man?” I basically accosted the president of TV Land and was like, “Next year, Peter and I are going to Italy!” We were super jealous. I’ve never been to Ireland — and I’m part Irish!

TVLINE | And it’s funny — earlier this season, if you had told me we’d end with a wedding, I would have expected it to be Diana’s.
I know! Life works in mysterious ways.

TVLINE | Life… and Darren Star.
Really mysterious. They don’t tell us what the hell is happening to us until right before we start filming. 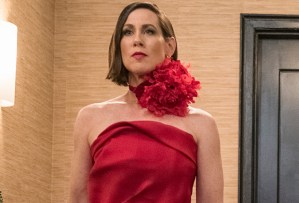 TVLINE | How did you feel about Diana’s decision to leave Richard?
I loved it. I actually had very strong opinions about it, and they were very receptive to how I felt about it. We were all on the same page about that. It was very important to me that her ending that relationship be seen as something that was ultimately empowering — not, “Oh no, she’s alone. Isn’t that so sad for a woman of a certain age?” Because I don’t think that. I don’t believe that. And I didn’t want to portray that. It was really important to me to show that it was the right decision, and a woman being in her forties and not in a relationship is not a sad, pathetic thing. And it’s not that she didn’t gain anything from being vulnerable and being in a relationship, because she did, but this was not the person for her. She had to end it, and she found herself again in doing that. I love that whole storyline. I love the scene, I love the red dress, I love the ginormous necklace — the whole thing.

TVLINE | And I love that Diana sort of teamed up with Richard’s ex-wife to figure out what was going on.
There are so many opportunities for storytelling where, in the past, things would have just been catty. Darren is able to find a connection between women that is, to me, true to life. You don’t really see it that often — how much we need and connect and learn from each other, as opposed to just competing. I mean, yeah, he’s had shows where that’s true, too. [Laughs] But he’s really good at finding how important these relationships are.

TVLINE | I also loved Diana’s line to Charles about them being “ships in the night.”
That was my favorite finale moment for Diana. In her bones, she just knows that — on paper, at the very least — she and Charles are right for each other. He is the only person that she considers a true peer and equal, which is no small thing to bestow upon a person for Diana Trout. It’s just so right for them to be together, and she thinks he sees eye-to-eye with her about that. My goal in that moment was to try and make Peter Hermann laugh, which I did. A lot.

TVLINE | At least there’s no shortage of eye candy in the office for Diana now that Zane is sticking around.
Oh, Zane … I don’t understand how nature can put all those features together in one person. Like, you must have some really bad habits in order for that to be fair. Maybe you have, like, a large bucket of severed heads under your bed.

TVLINE | Still not a deal breaker.
It’s really not, because he’s super nice. We’d have to find out how many severed heads are in that bucket and then we can talk. Know your limits.

TVLINE | Do you know if we’ll be seeing more of him in Season 5?
I think we definitely will. I don’t know exactly how, but he’s working there, which is a fantastic thing for Hilary [Duff]’s character. 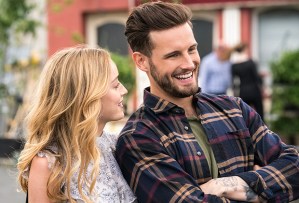 TVLINE | Lastly, I have to know how everyone at the table read reacted to Josh going through with his wedding.
A lot of mixed feelings. We all get really invested in these storylines. Like, when Kelsey and Liza were fighting, it was awful for all of us. So this was a heartbreaker. You just want to hold them both, like, “Guys. Guys, guys, guys.” But it’s true to life. Things get complicated when you’re in love with someone.

TVLINE | Honestly, the second we found out that Claire knew about Liza, I thought she was going to be crushed by scaffolding.
When you find out Liza’s secret, make sure you’re in a clear area.

TVLINE | That’s why they had to flee to Ireland!
Exactly.

Your thoughts on Younger‘s fourth season finale? Your hopes for Season 5? Grade the episode below, then drop a comment with whatever’s on your mind.