That sound you just heard? It was likely Suits fans — in particular, “Darvey” ‘shippers — freaking out after the show’s midseason finale on Wednesday.

In the episode’s final minutes, a speech from Louis about how he let his soulmate slip through his fingers spurred Donna to plant an impromptu kiss on Harvey. 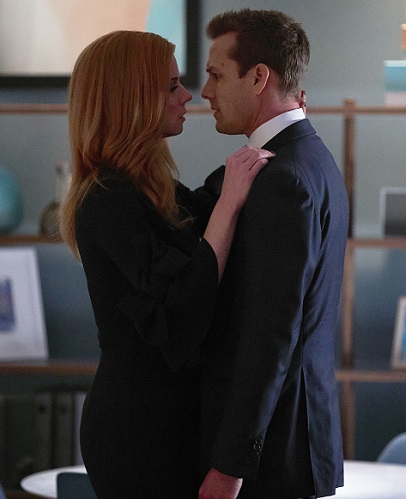 “I’m sorry, Harvey. I just had to know,” the redhead apologized after the smooch. Then she simply walked away from the stunned lawyer.

“Donna is doing this thing for herself,” executive producer Aaron Korsh tells TVLine. “She wants to know what her own feelings are and what she thinks she wants.”

Korsh encouraged stars Gabriel Macht and Sarah Rafferty to try different variations on the scene, but with the caveat that the moment needed to convey that “this is Donna putting herself above Harvey for a change.” The liplock is an especially “bold maneuver,” the EP says, considering that Harvey is currently in a relationship with his former therapist Paula. But Donna is “not thinking about Harvey,” Korsh continues. “She’s thinking, ‘I have to know how I really feel,’ so she just does it. She did what she needed to do, and she went away to process what that thing did to her. That’s why I think she walked away.”

Below, Korsh and Macht weigh in on the surprise kiss, Harvey’s own feelings and what comes next.

TVLINE | The kiss is, obviously, a very big deal in terms of Donna and Harvey’s relationship. Gabriel, did you talk to Aaron about it? Did you and Sarah have a discussion before you filmed it?
GABRIEL MACHT | I did not talk to Aaron about it, but I spoke to Sarah about it. We had a long conversation about how we thought we should approach the material… I think what we gave the producers and Aaron to cut with at the end of the day was what we all wanted. A viewer will take a look at this last beat and go, “Oh, my God! What just happened?! And how are they going to deal with this?” There’ll be plenty of people supposing certain things that Harvey is thinking, and there’ll be plenty of people that feel like, “Oh, my God, I don’t know where it could go.” I always find that the best art allows the viewer to choose their own imagination and to think on it after they watch something or see a painting or whatever it is… It’s very unresolved. I like how that moment ended. 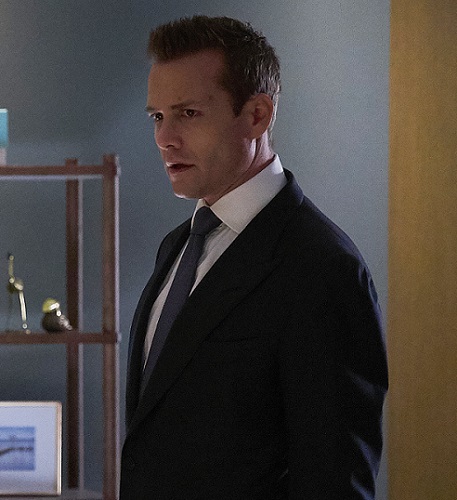 TVLINE | Donna just walks away without a reaction, really, and without giving Harvey a chance to respond. What’s going through his head in that moment?
KORSH | We’ll probably largely answer that in the back six [episodes]. Harvey is largely stunned and shocked. At the end of this episode, he is still, to some degree, in “What just happened?” mode. He’s shocked and processing what just happened.
MACHT | I think he’s in this state of like, “Was there something there? Did I feel something? I don’t know if I felt something. Did you just put me into a position that I have been fighting my whole life against – infidelity?” His mother cheated on his father. It’s a big theme in his life. There’s part of that.

TVLINE | Is there anything you can tease about what comes next in Season 7B?
KORSH | Obviously, there’s going to be aftermath. Think about the circumstances under which Donna did that. Think about Harvey’s current situation. Whether you’re rooting for Harvey and Donna or not, it’s still a bold maneuver to do that to someone else while they’re in a relationship, and especially given Harvey’s feelings on what it is to be faithful to another person. All I can say is it’s absolutely going to have its ramifications, and we’ll play that out over the back six [episodes] and, hopefully, [that] sets us up for a nice run in Season 8.

TVLINE | In the past, the characters have said they couldn’t be together and work together. Could you see them finding some way to make a relationship and their work co-exist?
MACHT | I think it’d be really difficult. It’d be really hard based on their rhythm and how they’ve worked thus far. I don’t see how it could be possible. [But] I have been wrong many times in my life. [Laughs]

Suits fans, what did you think of the season ender? Grade it via the poll below, then hit the comments with your thoughts on that big kiss.